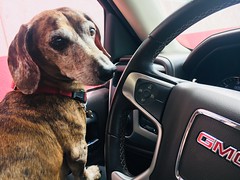 Mister B is the car dog. We don’t always take him along when we have to go somewhere, but more often than not we do. And just him. One dog in the car is manageable but three’s a crowd, so he rides along while the new girls, Fritzi and Lulu, stay home to guard the fort.

Until yesterday. Lulu had an appointment for a valley fever blood test. The animal hospital was several miles away and we didn’t know how long we’d have to wait there, so we left Mister B home with Fritzi. While we were out we decided it’d be a takeout night. Lulu was done by 4 PM, too early to pick up dinner on the way home, so we just drove back to the house.

Later, when it was time to go fetch our takeout, Mister B shot out the door like a bar of wet soap. He ran straight to the car and sat by the driver’s door. He’d seen us getting ready to go out again and had positioned himself near the front door, determined to reclaim his position as car dog. He must have been plotting his move for two or three hours, ever since Lulu got to go for a ride and he didn’t.

Don’t tell me I’m anthropomorphizing animal behavior. It was a deliberate act, carefully planned and executed. Never underestimate a dog.

I had vascular surgery on my right leg almost 20 years ago. Since it was my first surgery, the doctor sent me to get my heart tested first, either to make sure I wasn’t going to die on the table or to enrich a colleague at the expense of my military Tricare insurance (I suspect the latter). The heart clinic he sent me to was in one of the many medical complexes in and around Tucson. I thought at the time the preponderance of medical malls and parks made Tucson a bit of a necropolis. Well, now I’m 20 years older and can draw a map of it on the back of my hand. Nevertheless, a chill went down my spine this morning when I arrived at the shoulder, elbow, and hand surgeon’s office and realized it was one door down from the heart clinic where I got tested all those years ago.

So yeah, it’s my turn in the carpal tunnel barrel. For the past two years I thought I had a nerve problem with my right arm, but in the last six months I’ve realized it’s all in my right hand. Numbness, mostly, and the tingling you get when a limb’s gone to sleep and is waking up again. But not a limb, as I finally realized, just the hand. My doc thought it could be carpal tunnel syndrome and sent me to consult with a hand surgeon, which is what I was up to earlier today. Next I’ll visit another node of the necropolis for electromyography to confirm the problem really is the nerve running through the wrist, then, back to the hand surgeon to fix it. What next? I try not to anticipate. Let it be a surprise, am I right?

By the way, the hand surgeon was in costume, it being the Friday before Halloween. I told her my birthday is the 31st, she told me hers was the 20th, and we both agreed Halloween trumps Christmas. She said she’ll be happy to join my campaign to make All Hallows’ Eve a federal holiday. Now all I have to do is draft the petition and get her to sign it when I go back for surgery!

I stopped writing regular You Can’t Read That! posts a couple of years ago, canceling the Google email alerts I’d set up for news of banned books and censorship. I don’t know if the current wave of know-nothingism — the protests, school board meeting disruptions, death threats to teachers and administrators — is stronger and more intense than it used to be, but it’s beginning to feel like it. With that in mind, I’m going to start posting book banning and censorship news roundups again, and have set up new Google alerts (this time including “school board meetings” in the search terms). You can expect to start seeing YCRT! posts again on Paul’s Thing.