We’ve had house guests. Angie and Theresa, friends of more than 20 years, came back to Tucson to visit and put on a bicycling event. Both are safely home now, Angie in Tampa and Theresa in San Diego.

Here we are comparing hash t-shirt quilts Donna made for us. Donna finished mine a couple of years ago. She wanted to get Angie’s done in time for her visit and almost got there … it still needs edging, so it didn’t go home with Angie and we’ll have to ship it. Will Theresa eventually get a quilt too? I bet she’s got a great hash t-shirt collection! My quilt is in the left photo; Angie’s in the right:

The other day I gave Lulu’s strappy harness a tug and she popped right out of it, so we’ve back to using the vest-style harnesses on all three dogs. Here we are posing on our neighbor’s flagstone and tile steps. Too bad our lot is flat … no colorful stairs for us! 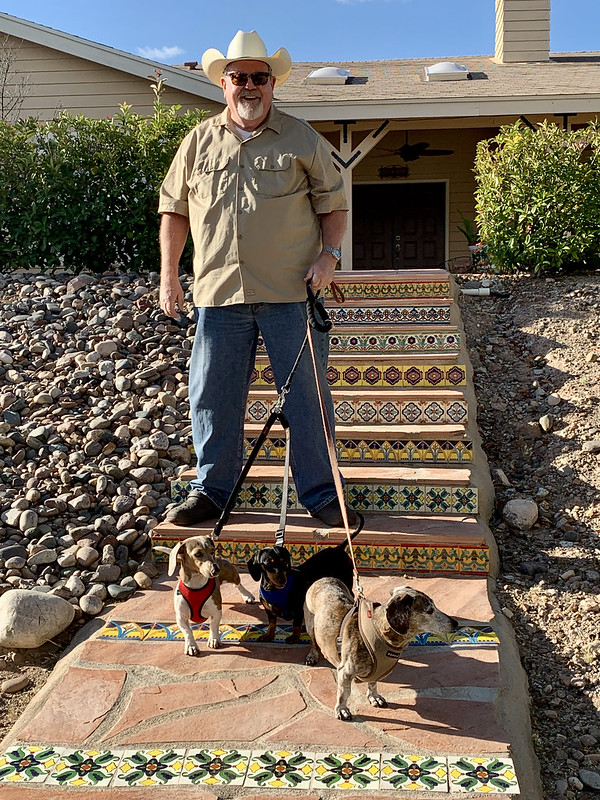 We’ve been watching “Big Sky,” a TV adaptation of C.J. Box’s Highway Quartet novels. The series airs on ABC and Hulu. We pay for a Hulu subscription so we can watch it without commercials. On ABC, the show runs for 60 minutes with ads; on Hulu it’s 42 minutes without. Even though we skip the 18 minutes of ads, we can’t help noticing the number of commercial breaks during each episode: they come every five minutes. Imagine: ABC viewers are sitting through three-plus minutes of commercials every five minutes. Was commercial TV always this bad? Streaming TV has so spoiled us, we can’t stand to watch commercial TV, cable news excepted (and not much of that).

I wonder what NBC’s up to with the way it reported this story: Teen Charged with Sexually Assaulting Student Is Accused of Groping Another.

As reported, a male high school student in Virginia, arrested for sexually assaulting a female student in May of this year, this month went after a second victim. After the first assault and arrest the student, now wearing an electronic ankle monitor, was allowed to transfer to another high school in the same district, where he is now accused of the second assault.

Apparently, the school board attempted to keep the first assault hushed up, and may have been trying to do the same with the second. When the father of the first victim protested at a school board meeting, he was arrested.

When I ask what NBC’s up to, what I mean is they left some important shit out. Namely that the male student assaulted his first victim in a girls’ restroom while wearing a skirt and posing as transgender. Apparently the school board had earlier made a decision to honor students’ sexual identities, including use of gender-appropriate restrooms and locker rooms, and didn’t want to admit that this particular student had abused the policy to gain access to a girls’ restroom.

No one wants to confront the uncomfortable fact that transgender-inclusive restroom and locker policies can be, and are being, abused by sexual predators, which may be the reason the NBC article ignores that part of the story. But playing lets-pretend-it-didn’t-happen isn’t the way to go here. It’s lying, and will only fan the flames of culture war.