In yesterday’s post I commented on a controversial teen rape case in Loudoun County, Virginia, in which a 15-year-old boy allegedly assaulted a 14-year-old girl in a high school restroom, then assaulted another girl in an empty classroom a few months later. News reports about the boy’s arrests and the crimes he’s charged with are quite specific, leaving little doubt the assaults occurred.

What’s in doubt is whether either assault had anything to do with transgender-inclusive school policies. According to some reports, when the boy assaulted the first girl, he did it in a girls’ restroom while wearing a skirt. Curiously, though, when you Google news reports about the assaults, which occurred in May and October of this year, the only stories linking the assaults to transgender-inclusive policies come from right-wing MAGA-land media outlets.

In other words, parts of the story I commented on yesterday may (or may not) be false. I’m trying to keep an open mind. Yes, I’m convinced the teenaged boy committed the sexual assaults. I’m willing to believe he wore a skirt to gain access to a girls’ restroom in order to commit the first assault, but the culture war polarization of the way the story’s being reported casts doubt on that aspect of it.

Do I believe a kid would pose as a transexual in order to gain access to girls’ restrooms and locker rooms? I know adults do it, so why not kids? Do I believe it’s rare? Yes I do, but that’s little solace to the girl who was raped, or to her father, who went to a school board meeting to protest the rape and the fact that the rapist was still attending classes, only to be arrested, hauled away, and prosecuted.

A few months ago this photo started popping up on social media: 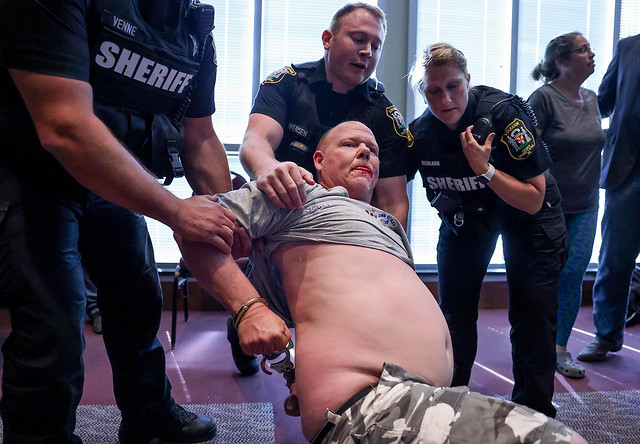 When I saw the photo, it didn’t come with a caption explaining the context. Assuming the man was just another MAGA maskhole who’d tried to disrupt a school board meeting, I reveled in his humiliation and reposted the photo to my Twitter and Facebook feeds. It was only this week, while researching the Loudoun County rape story, that I learned the man in the photo is the father of the girl who was raped. And I feel like shit for making fun of him. Yeah, he’s probably a MAGA maskhole too, but god damn it, what would you or I do if our 14-year-old daughter was raped at school and we had just learned the boy who did it was allowed to transfer to another high school in the same district and was still attending classes?

After that, I need a boost. How about you?

In March, when Donna and I got our Pfizer COVID vaccinations, we were told the probability of our catching or transmitting the virus was less than 5%. Just a few months later reports started coming in, first from Israel and then all over, that the vaccine lost effectiveness over time, and that we might now have a 40% chance of getting COVID after all (although we were still less likely to die from it than the unvaccinated). Another couple of months passed, and the CDC approved booster shots. We got in line and got ours, and now we’re told our chances of geting COVID are once again less than 5%.

The difference between March and October? I believed what we were told in March. I don’t believe what we’re being told now. Sure, I feel more protected, but I’m not letting my guard down. And neither should you.