We woke to a cold, steady, soaking rain this morning. We’re having a proper Arizona monsoon for a change; the first to live up to its name in the 23 years we’ve lived in Tucson. The dogs, of course, want nothing to do with it, so we had to put a piddle pad down on the tile floor by the back door.

Here are Mister B, Lulu, and Fritzi, posing on the mayor’s bench. The house in the background belonged to Bob, an original neighborhood resident who passed away a couple of years ago. Bob was the unofficial mayor of our subdivision, and we all kicked in on this memorial bench in his honor. 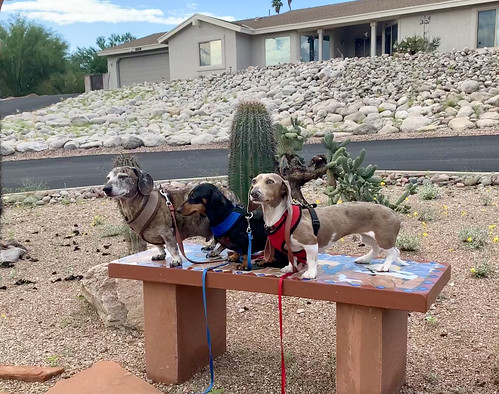 Donna had things to do yesterday and couldn’t walk the dogs with me, so for the first time I tried taking all three out at once. It was a tangled mess and we turned back early. A double dog leash is on its way from Amazon and should be delivered today. Hoping I can hitch both new girls to it, since they like to walk side by side. With Fritzi & Lulu on the same leash in one hand and Mister B on his own in the other, I should be able to wrangle the entire pack. We’ll see.

I’m working up an Air-Minded post on changes to the Air Force’s pilot training program, a hot topic of late in the MILAIR community, but I’m having trouble organizing my thoughts. When that happens, I know it’s time to write an outline, the way they taught us in high school English. The post is coming, but I won’t promise when.

When it comes to writing and composition, I have my own house style. It’s based on the Associated Press Stylebook, which since the mid-1980s has been my grammar, punctuation, and composition bible (except for the Oxford comma, on which we’ll never agree).

Just the other week I commented on the AP Stylebook’s revised guidance on possessives for common nouns ending in “s.” This week I’ve been thinking about AP’s rules for plurals of acronyms and single letters:

As with possessives, this rule seems simple and easy to remember. You’d think AP would use the same rule for plurals of single and multiple figures, but no. They say to indicate plural figures with just an “s,” no apostrophe: he rolled two 6s; the movie was set in the 1920s.

Confusing. Yes. That’s why I keep a copy of the AP Stylebook within hand’s reach. My Air-Minded posts in particular are full of initials, acronyms, single letters, and figures: sometimes possessive, sometimes plural. I have to look up the rules almost every time I write about flying. I flew F-15s. Which model? F-15C’s, mostly. Hey, this shit’s important!

My brother-in-law John, the husband of Donna’s sister Robin, dove off a boat yesterday, hit his head on a submerged rock, and broke his neck. That he didn’t die or become paralyzed is some kind of miracle; he’s in ICU in a Michigan hospital. We’re standing by for news and updates.

John and I once went sailing off the coast of Oahu and had to be rescued when the attachments for the rudder snapped off the stern of the 21-footer we’d rented. As the hotels on Waikiki Beach grew smaller and smaller, we rigged up a sea anchor to keep the boat from twirling around, found a Very pistol underneath the spare sail bag, and debated whether to fire it. Finally, realizing that although we could see the shore no one there could see us, we did. Some guys in a powerboat saw us, came to our aid, and towed us into the Ala Moana Yacht Harbor, miles from the Hickam Yacht Club where we’d started. If we hadn’t fired the flare we’d have been in serious trouble, because we were out in the deep ocean channel between Oahu and Maui, and the current had already taken us quite a way south.

You cheated the reaper that day, John. Here’s to doing it again!

I haven’t changed my opinion on getting out of Afghanistan, which I expressed in my last post. There are two ways to frame President Biden’s decision to send 3,000 troops to the airport in Kabul to help evacuate American embassy employees, contractors, and Afghan interpreters (the lucky ones who can get themselves and their families to Kabul, that is):

It can be both things at once, but I think it’s mostly the latter.

Hey, remember General Smedley D. Butler? The War Is a Racket guy? He must be getting pretty damn tired of rolling over in his grave. As for all the troops and contractors who deployed to Afghanistan and now realize their comrades died for nothing and that they themselves were merely cannon fodder for the military-industrial complex, maybe this time they’ll tell their children what it’s really all about so they don’t get seduced by politicians eager to get us into the next war, and the one after that.

One thought on “It’s All a Racket”