This is the French Leduc 0.21 research aircraft, flown in the 1950s to test ramjet propulsion. It was not capable of taking off under its own power and had to be carried aloft and released.

As I’ve noted before, speed was everything in the 1950s, and I’m especially enamored of the Leduc’s cockpit design, which was nothing if not cutting edge. Not to disrespect French aviation in any way … the nation has been a pioneer from the earliest days of flight to the present … but for some reason, when I look at those photos, I keep flashing on a certain Monty Python sketch. 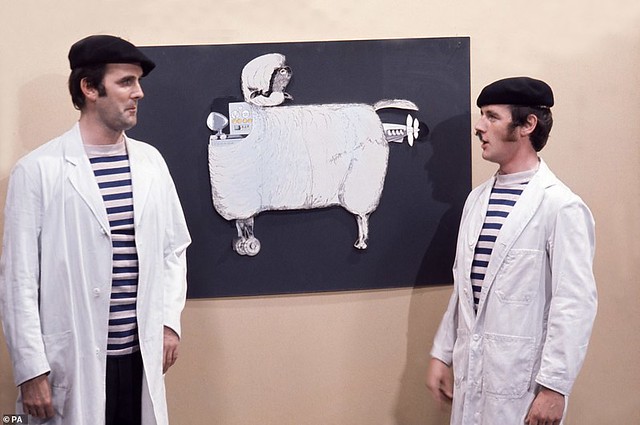 Adressing Afghanistan’s failure to stop the Taliban from taking territory and capturing provincial capitals, Pentagon spokesman John Kirby said the United States was deeply concerned about the trend but that Afghan security forces have the capability to fight them.

“These are their military forces, these are their provincial capitals, their people to defend and it’s really going to come down to the leadership that they’re willing to exude here at this particular moment,” Kirby said.

Asked what the U.S. military can do if the Afghan security forces are not putting up a fight, Kirby said: “Not much.”

Afghanistan’s leaders, from at least 2001 to the present, have been hopelessly corrupt and weak. Hamid Karzai and his successor Ashraf Ghani lined their pockets with the money and resources we poured into their country. Together they had 20 years to do something about the Taliban; they cared only about enriching themselves, their families, and their cronies. Trump wanted to get the hell out of that cesspool but didn’t have the guts to stand up to the generals; Biden, thank goodness, does.

The Afghan people could make a difference … if they wanted to. They’ve had plenty of time to try. There comes a time to say fuck it and move on.

“Exude,” though? Where did Kirby come up with that word? Foul odors are exuded, not leadership. Although in the case of Afghanistan’s leaders perhaps it’s the appropriate word after all. Hey, I can be both an armchair general and an English major at the same time.

Someone posted this to an online eggcorn forum, claiming it was an actual comment posted to an online conversation about vaccinations. I have my doubts.

”… it’s funny!!! Have you asked yourself why the people they got the shot is spreading the Delta variant!! So you need to ask yourself what did they put in that shot??? You need to look into how the government put small parks on blankets and then gave them to Indians they killed them off and you need to look into why do US government sprayed Asian orange And people in them Vietnam war people are still having affect so that they knew what was in that chemical”

And the diction: “why the people they got the shot is spreading the Delta variant,” “people in them Vietnam war people.” What’s going on there? I picture a smirking white college Republican making fun of Black speech patterns … which seems both ignorant and MAGA to me.

The linguistic detective in me says it stinks.