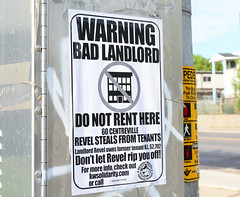 With news that eviction moratoriums are expiring … maybe … Twitter is awash in landlord hate.

Who among us hasn’t been a renter at one time or another? These days, between real estate prices and stalled wages, some of us will be stuck renting for life. If you’ve been, or currently are, a renter, you’ve had bad experiences with landlords. Don’t get me wrong. I understand the hatred, though to me it looks like people’s real beef is with capitalism.

I never wanted to be a landlord. Funny how it sneaks up on you, though. A lot of us become landlords not by design but by accident and circumstance. Few of us see ourselves as parasites, squatters, or leeches.

California has always been home, and at one time Donna and I had a plan to move back once we retired. In the early 1980s, a little more than a decade after life and work forced us to leave the state we loved, we started looking for a piece of property north of Sacramento. The plan was to pay if off over the course of my military career, then sell it and use the money to re-establish ourselves in northern California. I wanted land; Donna, working with a friend who lived in the area where we wanted to buy (we were in the middle of back-to-back overseas postings at the time), found the perfect parcel: 3 ½ acres in the hills outside of Grass Valley. The only problem was the land came with a house. We didn’t want to be landlords, but our friend convinced us we could cover the mortgage on the property with rental income from the house. By the time the Air Force was done with us, we’d own the land free and clear.

We lost our shirts on the deal. The problem was water (the only public utility to the house and property was electricity; we relied on a well and septic tank for the rest). A multi-year drought began the year we bought the land and house, and while rent covered our mortgage payment, the constant need to drill deeper to get to the water table came out of our pockets. It wasn’t long before our tenant turned to drugs and quit paying rent. As absentee landlords with an utterly ineffective local agent we found it impossible to evict the asshole. He finally up and died, just this side of us being forced to declare bankruptcy. We sold the house and property as is, taking a huge loss: not just money, but our toehold on living in California again.

Some years later, while stationed in Tampa, we bought another house, this one to live in ourselves. The real estate market in Tampa was hot at the time and we thought it would be no problem to sell when it came time to move. It didn’t work out that way and we were forced to become absentee landlords again. As before, we were able to cover the mortgage with what we got in rental payments, but anything more than that (repairs, upkeep, etc) came out of our pockets. We were luckier with our tenants that time around: our first renters were a military family like ours, and they were great. After a while they had to move, too; our second tenants were a couple who ran a home business and installed phones in every room and on the patio. That they were nudists, their home business a naturist resort booking agency, made them the talk of the neighborhood (we received regular, scandalized reports of the goings-on at our old digs). Even so, they too were good tenants, apart from drilling telephone line holes in every wall–we didn’t have to live through another deadbeat renter ordeal. We finally sold the Tampa house, four or five years after leaving Florida. It, too, was a net loss, but not the utter disaster Grass Valley had been.

Going by the numbers, we’re barely middle class. We can’t have been the only mom & pop landlords out there. We didn’t see ourselves as exploiters. We were just trying to make the mortgage on houses we couldn’t live in ourselves but were unable to sell. Landlords like us are the ones I worry about today.

I bet for all the millions of renters who lost jobs and income during the pandemic and legitimately can’t pay rent, there are tens of thousands taking advantage of eviction moratoriums to simply quit paying. This lady, for example, claims to have two deadbeat renters:

I own two condos in Chicago’s River North. Both tenants have not paid rent since May/June 2020—both have been GAINFULLY employed during the pandemic. I can’t sell. I can’t evict. I send letters demanding payment of rent due—and I’m accused of harassment. I’m screwed.

I don’t know. My suspicions are raised by her ownership of two condos in an expensive part of town. This suggests to me she makes a living off rental income, which, if you want to hate on landlords, puts her in the parasites & leeches category. Of course by that logic anyone who makes money off anything other than his or her own labor is a parasite and a leech.

But wait. The federal government last year authorized $47 billion in emergency rental assistance. What happened with that? If I understand correctly, at least originally it was the out-of-work renter who had to apply for it, and the landlord had to approve the application. The payments, when they came, went to the landlords, not the renters, but at least it got broke renters off the hook. That was the intent, anyway.

How easy is it to get emergency rental assistance? We can assume there’s plenty of red tape; everyone also knows governments are slow to come through with the actual dough. According to this report, landlords have pressed ahead with evictions in spite of federal, state, and city eviction moratoriums, often to prod the system into coming across with promised emergency rental payments. A lot of that $47 billion remains unspent.

Landlords who buy and rent property for income are probably better able to navigate government relief programs than mom & pop landlords, just as big businesses and companies were more easily able to get paycheck protection program loans during the pandemic than family-owned cafes and bodegas.

I wonder how small-time landlords, people in the same boat Donna and I were once in, are doing in these trying times. How many have had to default on their mortgages, losing everything they’d invested in and ruining their credit ratings besides? It can’t be a pretty picture, and the long term consequences are yet to become known. Guess we’ll find out when Wall Street, which is reportedly snapping up houses and condos at record rates, becomes everybody’s landlord.