Splashing in a Pool of Domesticity

The dogs get up at 5:30 AM. Since they share our bed, we have to get up too. Mr. B was on the same schedule when he was the only dog in our bed, but we could trust him to go outside to do his morning business while we rolled over for a few more minutes’ sleep. Not so the new girls, so we get up and usher all three dogs out through the sliding glass door in our bedroom. I stay in the back yard with them until they’re ready to come inside for breakfast.

When the dogs were done this morning, I took advantage of the season and enjoyed a lukewarm bath in the swimming pool. Because I can’t ever do anything just for fun, it was a working bath: I connected the vacuum roller thingie to the pool sweep tubing and sucked up sand and leaves from the bottom. The job was done just as the sun came up over the back yard fence.

For some reason the pool sweep, which is normally connected to the suction tube and runs overnight, is on strike, hence the buildup of sand and leaves on the bottom. When I disconnect the sweep and hold my hand to the end of the tubing, the suction’s strong. When I reconnect the sweep and hold my hand to the intake, the suction’s half that. There’s something stuck inside, and I haven’t figured out how to get at it. Too, it may be time to order a replacement sweep … they tend to last two to three years, and we got the current one in 2018. A work in progress.

Our black & tan dachshund, Lulu, isn’t responding to valley fever meds as quickly as Mr. B did, so we’re taking her to the animal hospital. She’s running a fever, eating only reluctantly, and coughing. Donna’s on the phone now, making an appointment. No idea yet whether they’ll hospitalize her or treat her as an outpatient. Also a work in progress; will update when I know more. 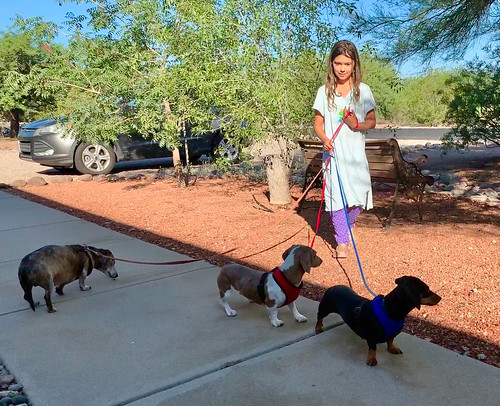 Giorgianna, our visiting 10-year-old great-goddaughter, watched both seasons of His Dark Materials on HBO Max with us. We thought she’d like the idea of a world where everyone has a daemon, and she did. And the armored bears, the fearsome Mrs. Coulter, and Lyra … but especially Pan. It was a re-watch for us, and we found ourselves liking it even more the second time. Later in the evening, after Donna and Giorgi go to bed, I re-watch The Expanse on Amazon Prime (3rd time for seasons 1-4, 2nd time for season 5, which I’m just about to finish), then Buffy (I have the DVD box set but stream it on Hulu to keep from having to get up and change discs, true First World decadence). This must be my 4th go-around with Buffy, and I still see details and make connections that went over my head on previous viewings. An extraordinary series. Thinking my next re-watch, from beginning to end, will be The Sopranos (also on HBO Max), and if its greedhead producers ever release season 5 of Better Call Saul to Netflix, that too (best wishes for a full recovery to Bob Odenkirk, by the way).

I admitted, a little while back, going into stealth mode on Facebook and Twitter lest the couple fostering the dachshunds we were trying to adopt discover what a flaming pinko I am. At our first meeting they struck us as hard-right types who might balk at re-homing the dogs with blue-staters like us. We met with them three times altogether, and were always careful to steer conversations away from politics and current events. I expect they assumed, given my military career (and especially, once it came out in conversation, that Donna had worked at a local gun shop for several years), that we were sympatico. In any case, we passed muster, the dogs are ours, and my social media profiles are unmasked again.

Which I think they have now discovered. Why? Because yesterday, unsolicited and out of the blue, the husband messaged me a selfie of him wearing a “Deplorable” hat. I won’t respond, but have to say it’s tempting to get an antifa or pussy hat and send him a selfie in return. Lulu and Fritzi, at least so far, have exhibited no fascist or authoritarian leanings. Unless you count sounding Reveille before the sun comes up.

Update (later, same day): Outpatient it is. Lulu has two new prescriptions to take with her valley fever pills: a course of antibiotics and five days’ worth of appetite stimulants. Both new meds are liquid and administered by oral syringe, which should be easier than forcing fluconazole tablets down her throat, but we’ll see.

One thought on “Splashing in a Pool of Domesticity”