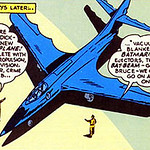 I love the jet fighters of the 1950s.  Built for speed, sleek and swept-back, they were the embodiment of the fantasy planes of comic book superheroes.  The North American F-107, an orphan fighter-bomber abandoned by the USAF, embodies the go-fast exuberance of the period.

The F-107 began life in 1953 at North American Aviation as a drawing-board project to increase the speed and capabilities of its successful F-100 Super Sabre.  Originally meant to be an air-to-air interceptor, a side project to give the improved F-100 air-to-ground capability caught the USAF’s attention, and in 1954 it awarded North American a contract for 33 aircraft (a contract which was later reduced, then cancelled, and those 33 aircraft were never built).

By this point differences between the original F-100 and the improved model were so great the new aircraft was designated the F-107.  Then, later in 1954, the USAF issued a requirement for a fighter-bomber capable of delivering a tactical nuclear bomb.  North American Aviation decided to enter the F-107 into competition for the contract and work began in earnest on a flying prototype.  The first F-107 flew in September, 1956.

The F-107 never had an official name.  North American initially (and unimaginatively) called it the “Super Super Sabre”, later referring to it as the “Ultra Sabre,” reflecting its F-86 Sabre and F-100 Super Sabre heritage.  Although superficially similar to the F-100, it really was a totally new airplane, and a very advanced one for its time.

The F-107 was to be a Mach 2+ fighter-bomber, able to defend itself with rockets and cannons while carrying up to 10,000 pounds of bombs or one tactical nuclear device.  Unique features included a semi-recessed weapons pod underneath the aircraft as well as an all-moving vertical fin (as opposed to a tail-mounted rudder).  Other advanced features were an early fly-by-wire flight control system with all-moving horizontal stabilizers and wing-mounted spoilers, and an automatically controlled variable-area inlet duct located above and behind the cockpit.

Ultimately, Republic won the USAF fighter-bomber contract with its F-105 Thunderchief, and only three F-107 prototypes were built by North American.  After initial flight and weapons testing, the first and third prototypes were turned over to what is today NASA, which used them for high-speed research at its Dryden Flight Research facility in California.  The second prototype was given to the USAF Museum at Wright-Patterson AFB near Dayton, Ohio.

During their time with NASA, one of the F-107s was used to test the side-stick control system later used on the North American X-15 rocket plane.  In general, though, the F-107s did not cover themselves in glory at Dryden.  They were notoriously unreliable, and the variable-area inlet ducts didn’t work as advertised, limiting their usefulness for high speed research.

After test pilot Scott Crossfield ground-looped #3 while aborting a takeoff at high speed, it was scrapped.  Its fuselage wound up beside a remote taxiway at Sheppard AFB in Texas, where for many years it was periodically set ablaze and used to train fire and emergency response crews (I used to see it sitting there, blackened and forlorn, when I’d land at Sheppard back in my Air Training Command days).

The first F-107 prototype, tail number 55-5118, is on display at the Pima Air & Space Museum, where I see it every time I conduct walking tours, and where I took some of the photographs used here.

One thought on “Air-Minded: the Super-Duper Sabre”