Yesterday, watching the livestream of Virgin Galactic’s first commercial spaceflight, I couldn’t help noticing the shirtsleeve environment inside SpaceShip II. What hit me first was that Richard Branson and his guests weren’t wearing oxygen masks. I began to think about the lack of masks when they were still attached to the White Knight mothership at 45,000′, approaching launch altitude. After launch, as Spaceship II climbed to an apogee of 282,773′, Branson and company remained unmasked. Witness: 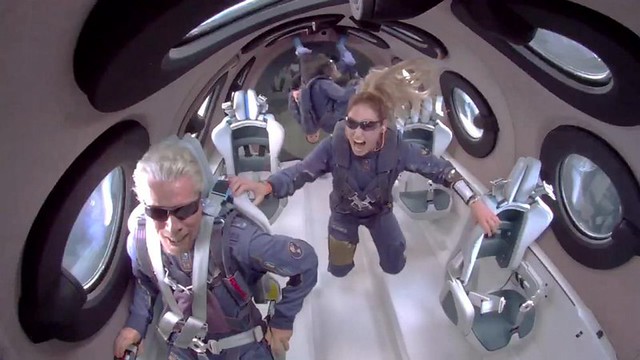 On Facebook, I speculated on the cabin altitude inside SpaceShip II. It must have been sea level, or whatever the altitude is at Branson’s “Spaceport America” outside Truth or Consequences, New Mexico (okay, I looked it up: it’s just over 4,500′ above sea level). I remembered that at 45,000′ in an F-15, which I flew for many years, my cabin altitude would have been above 20,000′. I’d have had an oxygen mask on, and it would have been feeding me pure O2 under pressure.

A friend saw my Facebook comment and asked what was the highest altitude I ever flew at.

My quick & dirty answer was 50,000′. USAF and FAA regulations limit max altitude to 50,000’ unless aircrews are wearing pressure suits (as with the U-2). The F-15 could get up into the mid-60s, but we never flew it above 50K. And as it was, I often experienced mild symptoms of the bends after flying at that altitude.

Of course an easy answer on Facebook is never enough. I spent a couple of hours this morning going through the F-15 flight manual and looking up information online, because there’s more to say. And as you know, whenever there’s more to say, as a blogger I’m contractually obligated to say it!

Most of us have flown on airliners, and appreciate the fact they’re pressurized. Some of us old farts remember flying on unpressurized DC-3s and DC-4s, when flight attendants would hand out chewing gum before takeoff and descent to help passengers clear their ears by chewing vigorously.

You may be too young to have flown on unpressurized aircraft, but you’ve probably driven up and down mountains. Going up is easy, because pressure inside the ear escapes naturally with a little pop. Going back down can be excruciating, though, because one-way valves in our eustachian tubes prevent higher pressure air outside the ear from finding its way inside. You have to force it in with a valsalva maneuver, which many people don’t know how to do … nature didn’t build us to make rapid descents from high altitude.

Actually, in airliners you still get a bit of ear popping on climb and ear discomfort on descent, but it’s not nearly as bad as it used to be. It’s far more noticeable in military aircraft, like the trainers and fighters I flew.

There’s a significant difference between the cabin pressurization schedules of civilian airliners and military aircraft. Here’s a side-by-side:

Briefly, in a jet airliner, cabin altitude climbs with the aircraft after takeoff, but at a slower rate, then levels off around 6,000′. The airliner can continue to climb to cruise altitude, but cabin stays at 6,000′. Sure, you’ll get a couple of pops going up and (especially if you have a head cold) some discomfort going back down, but it’s not bad.

At 50,000′, cabin altitude in an F-15 is 22,000′. By regulation, military pilots have to don oxygen masks when cabin altitude goes above 10,000′. The oxygen regulator senses cabin altitude and starts supplying increasing levels of O2 at 12,000′ cabin altitude. By 20,000′ cabin altitude, it’s supplying 100% O2 under pressure, which is very noticeable … you have to forcibly exhale against the pressure, and talking on the intercom or the radio is difficult. Spend 10-15 minutes at that altitude and your joints will ache after the flight as nitrogen in the blood bubbles out of solution … the bends. I used to get ’em all the time.

So why not just pressurize airliner (and while we’re at it, military aircraft) cabins to sea level and eliminate all this hassle? Richard Branson does it. So does SpaceX and NASA. Jeff Bezos & Elon Musk too. Even the Russians. Weight, I’m guessing. We’re willing to pay the weight penalty when it comes to spacecraft, which at least for now are built and operated on a onesie-twosie basis with no expectation of a profitable return on investment. Airliners built to hold sea level pressure inside regardless of outside altitude would be much more robust and heavy. They’d look like bathyspheres with wings. Expensive ones.

Also, with spacecraft there’s the necessity of avoiding another Apollo One, where a flash fire feeding on a 100% oxygen atmosphere inside the capsule killed three astronauts during what was supposed to be a routine ground test. The Apollo One disaster led to redesigning spacecraft to maintain shirtsleeve conditions inside, with sea level pressure and normal oxygen levels. Even though astronauts still wear pressure suits and helmets inside capsules going to and from the International Space Station (or during Space Shuttle launches and re-entries in the not-so-distant past), that’s for added safety, not necessity, because those craft, like the ISS, are pressurized to sea level.

I say we demand the same for everyday atmospheric flight. So there’s a weight penalty. NASA don’t care. Why should we, the flying public? Who’s with me?

One thought on “Air-Minded: Shirtsleeves … In Space!”