Social media is rumor central. Knowing that, I try to validate Facebook and Twitter stories before passing them on.

For example: you may recall a series of letters I wrote to military leaders and Congressional representatives opposing the airing of the highly partisan Fox News channel on military base common area TVs. It’s a cause I’m still invested in, so last night, when I saw a fresh thread of tweets on the subject, I started reading. Four or five tweets in, there was this, from a Twitter user named Jodi:

USAA (not a direct part of US Military, employs 36,000 people) decreed that only Fox News could be shown in all their break rooms. The CA region objected strongly, so they grudgingly allowed us to watch CNN. A small victory, since USAA closed the CA office a few years later.

Donna and I have been with USAA since joining the Air Force in 1973. USAA insures our property, house, and cars. Their rates aren’t cheap, but they’ve been great with claims over the years, they send annual dividend checks, and to many members feel like an extension of the military family.

Of course corporations have their own internal cultures. It’s safe to assume those cultures are generally conservative, but you expect corporations to be publicly apolitical; particularly organizations like USAA with hundreds of thousands of members representing the full spectrum of political viewpoints. But if USAA is internally a bastion of right-wing know-nothingism and racism, I don’t want to be any part of it.

Before bolting to another insurance company, maybe a bit of rumor control is in order. I forwarded Jodi’s tweet to USAA, along with a short question of my own:

@USAA, is this true?

No answer so far. I’ll ask again, reminding them Donna and I have been loyal customers for nearly 50 years. Yes, I realize I’m passing on a story that may well be untrue, but they’ve had plenty of time to respond to my first question, and I’ve already sent the follow-on reminder. So sue me.

Here’s one that appears to be untrue, posted yesterday to Twitter: 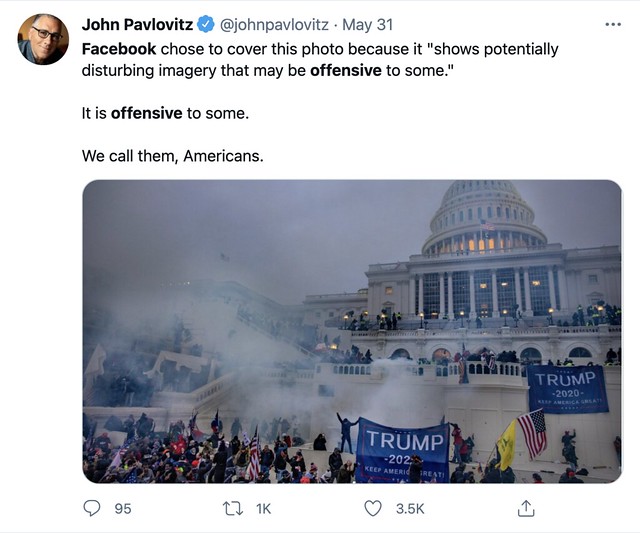 Gotta ask: how does John Pavlovitz (I chose not to crop off his Twitter handle & address because he’s a blue-check “influencer” and that should come with the territory) know this? Did it happen to him? Or is he repeating something he heard from someone else? Easy enough to put it to the test: I posted the same photo to my own Facebook account. A day later, Facebook has neither taken it down nor locked me in the penalty box.

I’ve been in that box, by the way: last year I posted a cartoon showing a Ku Klux Klansman standing over an air vent in the famous Marilyn Monroe pose: his bedsheet, blowing up, revealed a cop uniform underneath. Within a few minutes the post disappeared and I’d been suspended for 30 days. 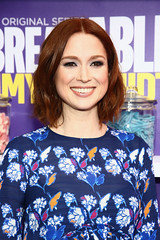 Last but not least: the current outcry over Ellie Kemper’s KKK past. Ellie Kemper? That sweet thing?

I did some digging. The story, public knowledge for many years but for some reason being dug up again, is that she comes from St. Louis money. As an 18-year-old debutant in 1999, she was crowned Queen of Love and Beauty at Fair St. Louis.

Okay, so how do you get from beauty queen to KKK?

Fair St. Louis, until 1979, was called the Veiled Prophet Ball, a Mardi Gras-style event put on by the Veiled Prophet Organization, which was founded by wealthy white St. Louis elites in 1877. The society (which took its inspiration from New Orleans’ Mystic Krewe) was formed because the city of Chicago was stealing some of St. Louis’ mercantile thunder, but also for union-busting … St. Louis was at the time a hotbed of labor agitation, Black and white. As with the Mystic Crewe, racism is embedded in its DNA (although I should note the VPO began admitting Black members in 1979, a year before Ellie Kemper was born).

Sadly, the “Veiled Prophet” once wore a head-to-toe robe resembling the KKK getup we’re all familiar with (you can see an 1878 illustration in the Wikipedia entry linked above). This is what the Veiled Prophet looks like today, in this 2016 photo (accompanied by that year’s Queen of Love and Beauty). I see more Pope than Grand Kleagle in the costume, but some would argue they’re much the same. 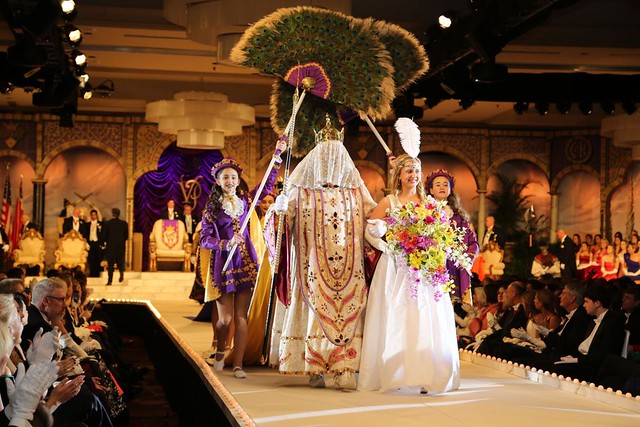 My rumor control verdict? Every debutant ball south of the Mason-Dixon Line was founded by white racists. Probably every one north of the Line too. Ellie Kemper’s from money? Good for her, I guess. Is being white and from money racist? Maybe. I’m with the person who wrote this tweet:

Fellow white people: don’t you dare go for Ellie Kemper‘s jugular if you’re not going to examine your own inherent racism. If you’re white & grew up in the U.S., you were instilled with racist values and it remains the air we breathe. Remove the plank from your own eye.

Any Democrat can relate. After all, we were once the party of segregation and Jim Crow, as right-wingers love to remind us. But the best reaction by far? This: