Our grandson Quentin has his high school diploma. Donna flew to Las Vegas Monday to attend the graduation ceremony, which was held Tuesday evening at the MGM Grand’s Garden Arena. I watched the livestream on my iPad at home. Four hundred young men and women crossed the stage, and that was just the evening ceremony … Q’s senior class numbered around 800; the first 400 graduated earlier in the day. 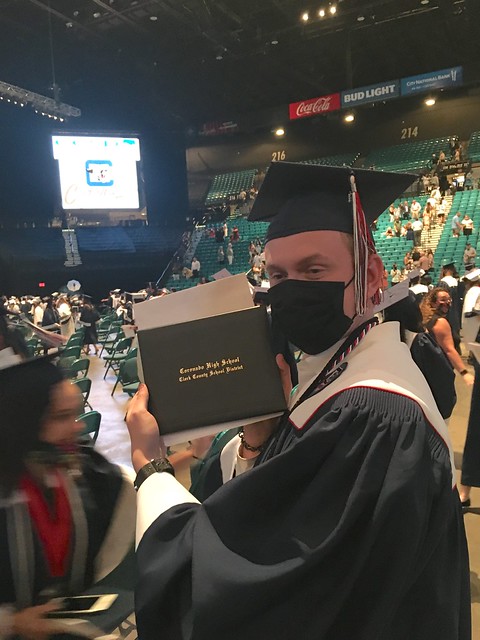 My high school graduating class, in a suburb of Sacramento, California, numbered 400; in 1964 that was considered huge. Our son Gregory, Q’s dad, graduated as part of a smaller class, just 200 or so, but that was in Anchorage, Alaska.

It was odd watching a masked graduation ceremony. You couldn’t see a single face. It must have been hard on the parents. Better than last year, though, when entire classes graduated in school parking lots, unable to get out of their cars, reaching through rolled-down windows to get their diplomas. When Q gets old and tries to tell stories about the plague year, I hope the young’uns believe him!

So what’s next? He’s off to college in August, at Dixie University in St. George, Utah.

I fetched Donna from the Tucson airport this morning. She was able to work in a short nap at home before driving off to her sewing guild’s annual retreat at an area resort. I won’t see her again until Saturday. We felt bad I couldn’t come along for Q’s graduation, but we’re planning a proper family get-together at Big Bear Lake, California, in mid-July. I just booked a cabin, a pet-friendly one so we can bring Mister B. Gregory, Beth, Taylor, and Quentin are staying in another cabin, and we’ll have a pontoon boat to laze around on.

Birds are starting to use the bath we put out front. I go out every morning, scoop out debris and crud with a hand strainer, and top it off with a garden hose. 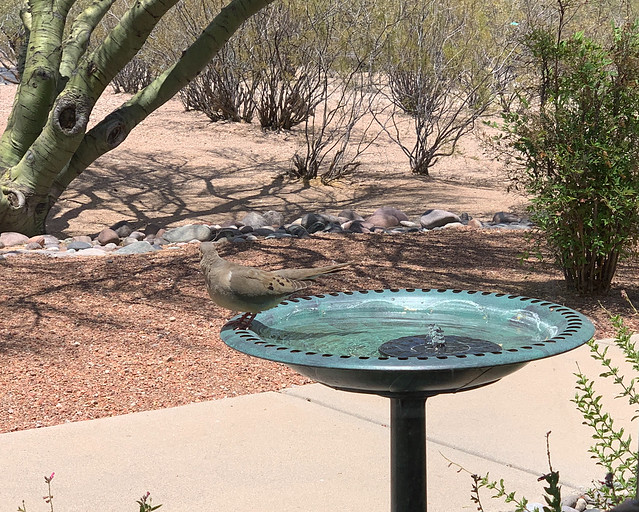 This isn’t the kind of bird I’d hoped to attract, but hey, even pigeons deserve a break, and we’ve seen our regular gang of house sparrows using it as well. I imagine bats visit it at night. I thought the floating solar-powered pump might scare potential customers away, but no.

Eight of the twelve pop-up sprinklers in our back yard no longer pop and need to be replaced. I hope to enlist Polly for the task next time she comes around. Otherwise I have little to do while Donna’s away but catch up on the streaming TV shows I like (and she doesn’t), and read. Speaking of which, my friend Dick Herman is back in the game with a new novel, Shades of Mercy. He was kind enough to send a copy, and I can’t wait to get into it.

I hear Trump’s blog is down. Per the New York Times:

Mr. Trump had become frustrated after hearing from friends that the site was getting little traffic and making him look small and irrelevant, according to a person familiar with his thinking.

Shit, I could’ve told him how that would go down. Besides the fact that no one reads blogs, just having one is enough to make anyone small and irrelevant. But never fear, I’m not giving up on this one!