My friend Joe Coles, who publishes the excellent Hush Kit aviation blog, asked for my thoughts on the USAF’s new version of its legacy fighter, the F-15EX Eagle II. I sent him this short response:

Joe, I can’t speak much to the aircraft itself, but I started pushing the idea of buying some of the advanced versions being built for allied nations years ago, prompted by the aging of F-15s still in USAF service and the far smaller buy of F-22s than originally planned. At the time no one in any official position would even broach the subject, because to do so would threaten the F-35 buy. Now, USAF leaders are openly talking about a “future without the F-22” and even more cutbacks in the total F-35 buy … the good old F-15 has range the F-22 and F-35 don’t, a robust airframe you can hang the most powerful radar on, and the ability to carry up to 22 air-to-air missiles. All you give up is stealth. And as I also said years ago, “fuck stealth.” I’ll see what I can work up.

By way of backup, I first wrote about buying new F-15s in July 2015. In that post I cited three “legacy” fighters the U.S. military was no longer buying, but which were still being built for foreign sales: the F-15 Eagle, F-16 Fighting Falcon, and F/A-18 Hornet. At the time, no one in the military or defense contractor community would openly discuss the idea. Surely the thought had occurred to many, but to speak of it might threaten the military’s most sacred cow: the F-35 Lightning II. Here’s some of what I said then:

All of these current and proven fighters share the advantages attributed to the F-35: they are true multirole aircraft, they are highly maneuverable, they use advanced digital array radars, they can employ everything in the modern air-to-air and air-to-ground armament inventory, they have helmet-mounted displays with off-boresight missile cueing, they have datalink for information sharing. The only thing they don’t have is stealth.

Fuck stealth. There isn’t an air force in the world that won’t turn tail and run from a wall of Eagles coming its way.

To be fair, there is also this: the success of the F-35 program depends on American and allied countries standing firm on buying it in the numbers projected. If one or two allies back away from their commitments to buy the F-35, costs will go up dramatically and other allies may get wobbly knees. And if American military services start buying new versions of legacy fighters, they’re going to want fewer F-35s.

A lot has happened since 2015. Buying new versions of legacy fighters is no longer a taboo topic but an established reality. The USAF is buying 144 F-15EX Eagle II aircraft, an advanced version of the F-15QA being built for Qatar. The first two USAF F-15EXs are now undergoing testing at Eglin AFB, Florida. The added capability they’ll give the USAF, in both air-to-air and air-to-ground roles, is already affecting the F-35 program, with reduced numbers of aircraft being budgeted for and purchased each year.

A more direct threat to the F-35 program is the USAF purchase of new F-16s (also still in production for foreign customers), since unlike the F-15, the F-16 is the fighter the F-35 was meant to replace. In fact there is now high-level talk of buying new F-16s and capping USAF F-35 purchases at 1,050 versus the 1,763 originally planned. This isn’t a done deal, but it’s looking likely. As for the Navy, it too is buying new versions of a legacy fighter, the F/A-18 Hornet. I don’t have numbers, but the decision is bound to affect the number of F-35s that service will eventually buy.

Under the Obama administration, production of the F-22 Raptor, the stealth air superiority fighter meant to replace the F-15 Eagle, was capped at 187 aircraft, far short of the 750 the USAF said it needed. It made sense then to keep a number of existing F-15Cs flying to supplement the few F-22s in service. Now that those remaining F-15Cs are facing retirement, it makes sense to replace them with new F-15EXs. The same logic applies to the idea of supplementing USAF F-35s with existing F-16s, then purchasing new versions of the F-16 as the existing fleet is retired. In both cases, new versions of legacy fighters are cheaper to buy and operate than the aircraft that were meant to replace them, and in some specific areas (range and weapons-carrying capabilities, for example) better as well. Yes, we sacrifice stealth. You already know what I think of that.

I recently wrote about the Eagle Eye, the rifle scope F-15 pilots once used to see and identify target aircraft at longer ranges. You can see one mounted to the head-up display bracket behind the windscreen of this F-15: 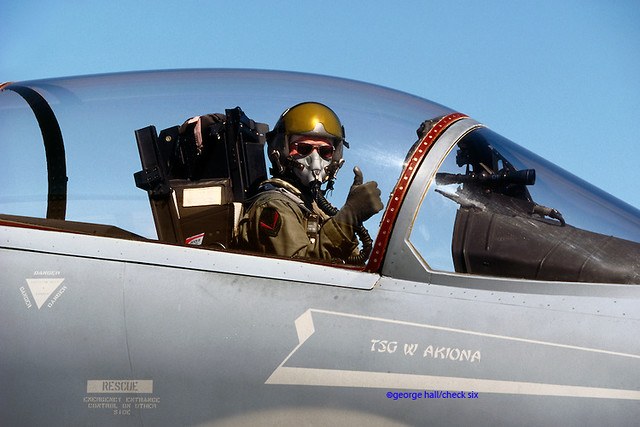 I remembered that my operations officer at Soesterberg Air Base, one of the original cadre of pilots selected to fly the F-15, had been one of the movers behind the Eagle Eye. I contacted him to see if what I’d written was anywhere close to the truth. Here’s his response:

Skid,  Great to hear from you and that you are both hale and hearty. Re Eagle Eye … as I recall the impetus was a 2-year mid-70s test called AIMVAL/ACEVAL, during which VID was required. The little airplane mafia wanted to cancel the F-15 buy and purchase a bunch of F-5s. VID meant the all aspect AIM-7 was almost ineffective. We chatted with our AF and McAir engineers and had them design and produce the gun scope mounting brackets, bought 7 scopes for our test aircraft, and tried them out. They got our VID range outside of min range. The things we did for our country! Cheers, Jeff

To flesh that out:

VID is visual identification, the ability to see an adversary aircraft and determine what it is: friend or foe, aircraft type, national markings, etc.

The “little airplane mafia” were reformers in DoD and the defense industry opposed to the Air Force and Navy’s large, expensive, and complex F-15 Eagle and F-14 Tomcat, who argued instead for purchasing large numbers of smaller, less capable fighters like the F-5 Tiger. Their influence led to the AIMVAL/ACEVAL tests at Nellis, and later to the Air Force and Navy’s decision to buy “high/low” mixes of fighters (F-15s and F-16s, F-14s and F/A-18s).

The AIMVAL/ACEVAL test was “rigged” to skew results in the little airplane mafia’s favor with the imposition of VID requirements imposed on F-15 and F-14 crews, preventing them from employing their long-range weapon, the all-aspect AIM-7 Sparrow missile, against the F-5s (which were not equipped with long-range radars or missiles).

The Eagle Eye, developed by AIMVAL/ACEVAL F-15 pilots, allowed them to VID F-5s coming at them in time to take head-on AIM-7 shots before minimum range.

In the end, despite rules designed to even things out for the little planes, it was clear to military leadership that the F-15 and F-14, with their long-range radars and missiles, gave more bang for the buck. The F-15 in particular turned out to be its own best proponent, with a combat record of 104 air-to-air kills and not a single loss. The small airplane mafia did get something out of the deal, though: USAF F-5 aggressor squadrons were established in the U.S., Europe, and the Pacific (today the USAF’s aggressor role is performed by civilian contractors, but the Navy and Marines still have a few F-5s at China Lake and Yuma).

In my personal experience (I came into the F-15 in 1978, not long after the AIMVAL/ACEVAL tests concluded), artificial training limitations on the F-15’s long range and all aspect missiles persisted well into the 1980s. It was routine, when setting up dissimilar air combat training with units operating older and lesser-capable fighters, for them to demand we not score (or even take) long range head-on radar missile shots, or even close-range head-on shots with our all-aspect heatseeking missiles, the idea being to force us into turning visual dogfights where many of the Eagle’s advantages were eliminated. It was done for fairness, of course, and even though we weren’t allowed to call kills with them, we took those long- and close-range head-on shots anyway, and knew we’d taken our adversaries out prior to the merge … just the way the designers of the Eagle intended.

Today, everyone has all-aspect radar and heatseeking missiles, and is equipped with sophisticated electronic equipment for identifying enemy aircraft at distances outside of visual range. The Eagle Eye, as far as I know, is an obsolete piece of gear. But damn, when you saw F-15 pilots stepping to their jets with a helmet bag in one hand and a mean-looking rifle scope in the other, you knew they meant business!

5 thoughts on “Air-Minded: Following up on Eagles & Eagle Eyes”