NBA (Not Hoops Tho)

My pasta puttanesca is a hit with Mister B.

Staying with critters for a moment, mourning doves have occupied the recently-vacated patio nest, most likely the same pair who built it in the first place. It’s said they breed up to six times per season and sometimes use the same nests they used before, so yeah, probably. Don’t want to sound like a bird racist, but it’s hard to tell one mourning dove from another. Just one egg this time around. 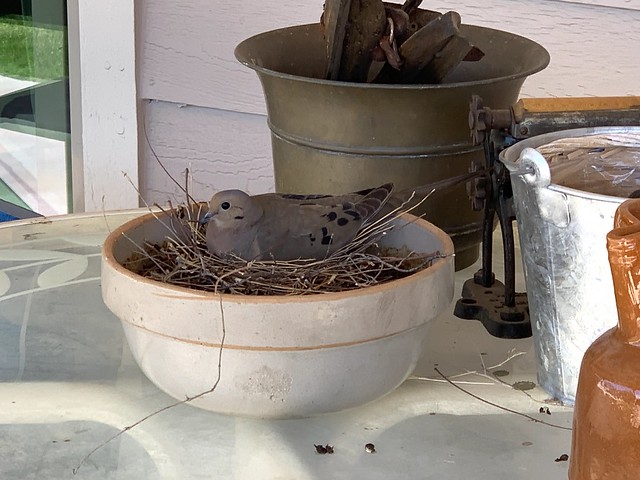 From this morning’s Google News digest: CDC to Finally Allow Cruise Ships to Start Sailing Again. This is one place where the problem of people using false proof of vaccination documents (i.e., lying about being vaccinated), is going to become real in a hurry. Another is air travel. Another is theme parks. I’m not that worried they’ll affect vaccinated people (barring new variants, god forbid), but they’ll certainly spread it amongst themselves and to children, who as of yet aren’t getting the vaccines.

Related: Donna and I watched President Biden’s SOTU-by-another-name speech last night. We thought at least a few of the senators and congresspersons in attendance would be unmasked, but everyone present had one on. Assuming they’d all been vaccinated, we figured the masks were meant to be a deliberate message about compliance with CDC guidelines and taking personal responsibility.

Today I learned 25% of House members are still unvaccinated (and at least three members of the Senate). So masking up was not only CDC-compliant and responsible, but NBA (necessary because of assholes).

p.s. President Biden. Isn’t it nice to be able to use the proper title again? Not once in four years did I connect the P-word to the T-word. Nor did I ever use the two words in the same sentence, paragraph, letter, or blog post.

p.p.s. My usage bible, the Associated Press Stylebook, says to capitalize all specific references to the House and Senate of the United States and individual states (the Senate/the U.S. Senate, the state House/the Arizona House, etc.). When it comes to senators, congresspersons, and even presidents, however, the words are only capitalized when used as formal titles, connected to names (the president/President Biden, the senator/Senator Kelly, etc). I’ve always thought this a bit of a disconnect, but can’t quite put my finger on why. If I were king, I’d apply the second set of rules to legislative bodies, capitalizing them only when referring to named bodies (the U.S. Senate, the Alabama House, etc.). Overcapitalizing exposes the German roots of English … or so it seems to me.