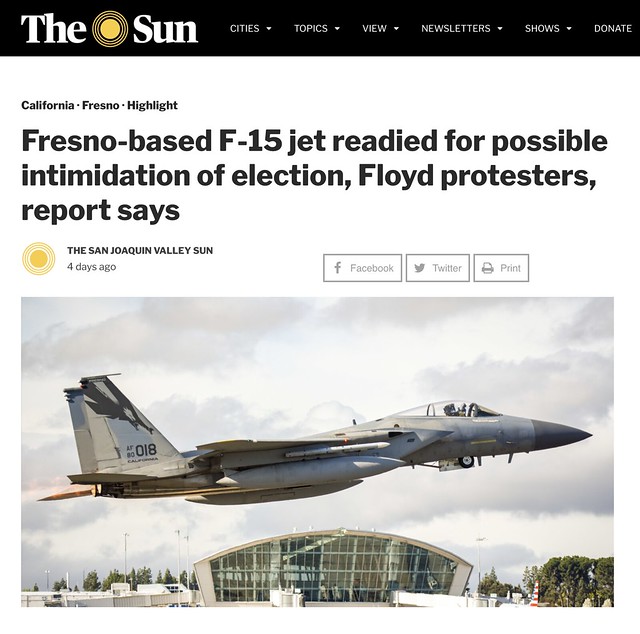 This story, about the California Air National Guard putting Fresno-based F-15 Eagle pilots on alert to combat civil unrest, was widely shared on social media. The jets were put on alert three times last year: in March in case statewide COVID stay-at-home orders resulted in riots; in May against potential unrest over the police killing of George Floyd; and in November in anticipation of rioting generated by the presidential election. Guard sources speaking to the San Joaquin Valley Sun said the jets were to be used to scare off and disperse protesters via low-altitude flights, similar to operations undertaken in war zones overseas. In the event, the jets were never launched.

There is some precedent for what California Air Guard leaders had in mind. In 2003, two American F-16s, unable to use their weapons because they couldn’t distinguish between enemy and friendly forces in close contact, dove toward Iraqi troops surrounding a British patrol in Iraq. The sonic booms they generated scattered the Iraqis and were credited with opening an escape route for the Brits. In 1977, the Dutch employed six F-104 fighters against Moluccan terrorists who had hijacked a train and were holding hostages on board. The jets flew low over the train at supersonic speed, generating sonic booms and shockwaves to disorient the hijackers and cause the hostages to duck to the floor as snipers began shooting through the train’s windows.

In both cases, using sound and fury as a weapon worked. More importantly, given the circumstances, it was the right thing to do. How would history judge us, though, if we used military jets against our own people, flying low and fast over crowds of civilian protesters in order to confuse and disperse them? I don’t think it would live as a shining moment. Just thinking about it leaves a bad taste in the mouth.

In the late 1960s I put in an application for a job at the University of California at Davis. At the time, I was a starving student at Sacramento State College, looking for employment that would allow me to continue my education. The job was with the UC police department, and the posting promised not only a living wage but tuition benefits and flexible hours. During the pre-interview, though, they told me I’d be posing as a student and narcing out drug users and sellers on campus and in the dorms. Nope.

A few months later I considered applying to the California Highway Patrol, even though it would mean dropping out of college. It looked like it would be a good career, and the potential was there to eventually earn a degree with night classes. But protests over the Vietnam war were rocking California cities and Governor Reagan was threatening to deploy police forces … including the highway patrol … to control and arrest protesters. That was enough to put me off that idea.

I wonder how I’d have reacted if the Air Force ever ordered me to fly low and fast over crowds of noncombatant U.S. citizens in order to confuse and disperse them. I like to think I’d have said “go to hell.”

Once again, the Centers for Disease Control says “There go the people. I must follow them, for I am their leader.” I like the chart, though. It answers most questions people are going to have. Of course by “people” I mean the responsible kind. Click on the chart for more details. 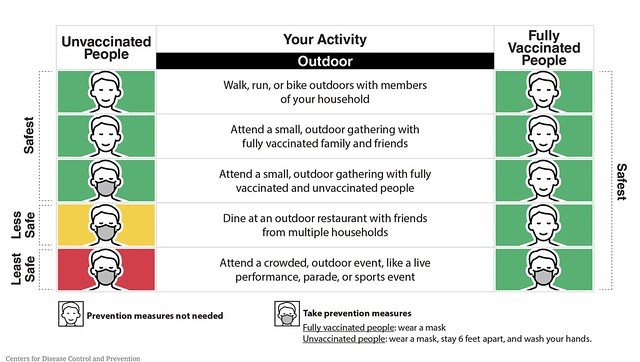