When Donna took Georgianna and Don to the train station last week, she pulled a ripe-looking grapefruit off one of the trees out front and brought it home. I cut it up for breakfast today, but it’s too bitter. Sugar might salvage it, but that would mean eating sugar, not on my food plan. Oh well, you get what you pay for.

The patio mourning doves boogied the minute they learned to fly. The nest has been empty for a week now. This morning, when I went out back, an adult dove flew out from under the patio. Having read how these critters breed up to six times a year, I wonder if another mated couple have their eyes on that empty nest. Wouldn’t surprise me.

Thursday evening Rachel Maddow ran a segment on a retired USAF general who’s been peddling looney nonsense about a CIA conspiracy to flip the 2020 election to Biden. While I didn’t recognize the man, his unit scarf and patches jumped out at me: 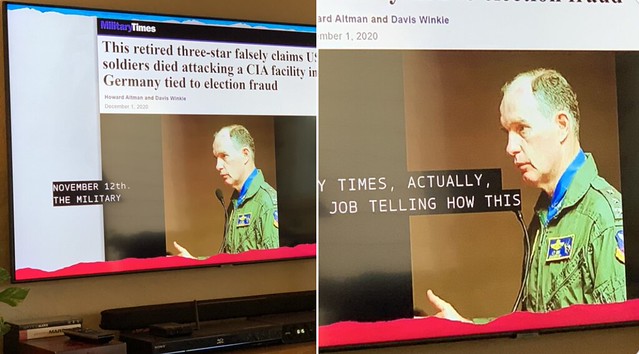 Later that night I looked up the crazy general on Google. His name is Tom McInerney. He was USAF vice chief of staff before retiring in 1994. Earlier, from 1988 to 1992, he’d taken a turn running Alaskan Air Command. While there, like previous AAC commanders, he was attached to the 43rd Fighter Squadron Hornets at Elmendorf AFB for flying. I was a Hornet from 1982 to 1985 and wore the same patches and scarf, which is why seeing them on screen gave me a jolt.

One of my side duties in Alaska was being the personal instructor pilot for the general who ran the show. My charge was Lieutenant General Lynwood Clark, tactical callsign “Comet,” a good man and not at all crazy. I was on his wing every time he flew. I’m glad I moved on and wasn’t there to fly with McInerney, who must have been quite an act, judging from his present behavior.

I don’t know when Maddow’s photo was taken, but presumably it was after McInerney retired. A lot of retired generals suit up to make speeches to civilian groups, a no-no under the UCMJ when it comes to partisan politics. But when the Army failed to shut down General Boykin, the guy who made public speeches during the George W. Bush administration in which he lectured audiences, in uniform while still on active duty, about Muslims being agents of Satan, the floodgates opened for assholes like Michael Flynn and Tom McInerney.

BTW, the Hornets are no longer in Alaska. Today the 43rd FS is at Tyndall AFB in Florida, where it trains new F-22 Raptor pilots.

Last year at this time Trump famously recommended drinking bleach and inserting UV lighting into body cavities to kill coronavirus cooties. The perfect wrap-up headline for the anniversary of that lunatic episode (and pretty much the entirety of Trump’s time in office) is this: Washington Press Corps Covers Up Trump’s Profound Stupidity. Because that’s exactly what the media did. And continues to do today. And will keep right on doing … when it comes to Trump, that is. Other politicians, Democrats in particular, get the full Emperor’s-New-Clothes treatment. Why is that, I wonder?

And why does the media treat us as if we’re stupid, as with this St. Louis Post-Dispatch headline? 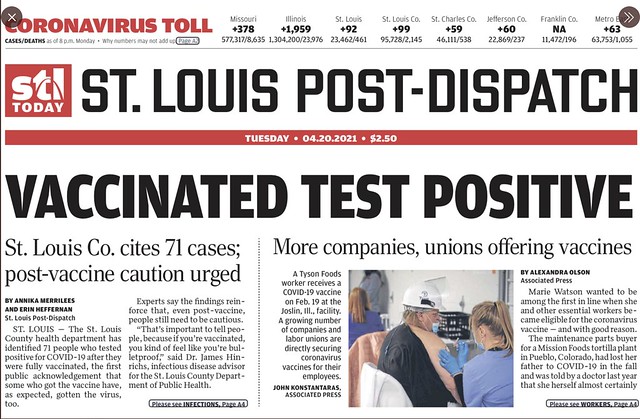 p.s. After loud and widespread protest, the St. Louis Post-Dispatch rewrote the headline, which is why I couldn’t link the screen grab to the original. The revised headline: Post-vaccine COVID-19 cases are uncommon, but St. Louis County experts urge caution.

I mentioned the bullshit St. Louis headline in a letter to a friend, observing its similarity to other post-vaccination COVID scare stories in the media: big alarming headlines and soundbites that fade away to nothing when you get to the actual deets.

We’re told the Pfizer vaccine is over 95% effective. Does that not suggest that 5% of those getting the treatment might contract the virus anyway? Yes, but … it turns out the breakthrough infection rate isn’t anywhere close to 5%. It’s less than 1%, as I see from an article in Slate titled “The Really Surprising Thing About Fully Vaccinated People Who Get COVID-19.” Here’s the relevant part:

If [the Pfizer vaccine gave] 95 percent protection, you would expect 5 percent of the [75] million people who’ve been vaccinated not to be protected,” said Barry Bloom, a professor of public health and an immunologist at the Harvard T.H. Chan School of Public Health on a press call on Friday. (This is a little bit of a simplification—epidemiologists like to point out that 95 percent efficacy technically means that after you’re fully vaccinated, you’re 95 percent less likely to be infected compared to an unvaccinated person.) The same logic applies to the Moderna vaccine, which is 94 percent effective, and the Johnson & Johnson vaccine, which was 72 percent effective in a U.S. trial. In fact, the number of breakthrough COVID cases was “less than I expect,” said Bloom. “Far less.” Of the 75 million vaccinated people in the U.S., the 5,800 breakthrough cases represent just 0.0075 percent.

One last thing (truly I am the Steve Jobs of bloggers): my tolerant take on artists and their art, after reflecting on the recent two minutes hate directed at producer Joss Whedon.

Apparently he’s an asshole. My apologies to Charisma Carpenter, whom I adore, but I’m not giving up on Buffy, Angel (where Charisma carried the first four seasons and everything went downhill after Whedon wrote her out of the script), or Firefly. I’ll be a fan forever.

Which brings me to HBO’s The Nevers, universally panned. I started watching it last week and to say the least, there’s a disconnect between the bad reviews and the actual show, which is damn good. It seems Whedon directed the first few episodes, then left the series after his accusers came forward. The bad reviews IMO have more to do with Whedon than with the quality of the show itself.

Which in turn got me thinking about what conservatives call “cancel culture,” the renouncing of artists—and the works of those artists—who turn out not to be who we hoped they were in real life.

Pulp Fiction, one of the greatest movies of all time, was produced by Harvey Weinstein, a serial rapist now losing his teeth in prison. Mad Max is synonymous with Mel Gibson, a racial and religious bigot with reprehensible views. If Joss Whedon was the high card in my straight, I’d fold to the guy across the table holding a Weinstein/Gibson pair.

We’re all assholes in real life. Thank goodness some of us are capable of producing great art in spite of it.