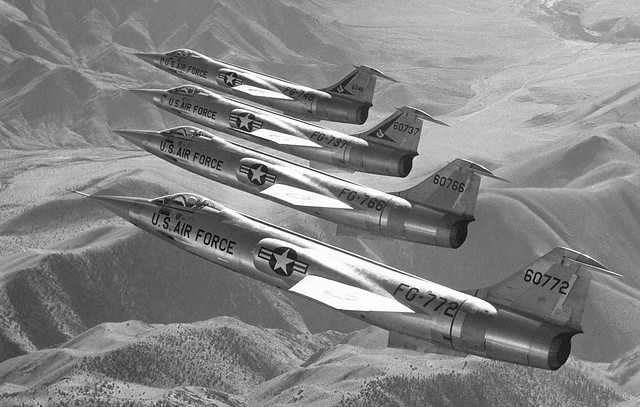 In a post about aircraft I’ve flown, I wrote a brief description of my one-time flight in the Zipper, Lockheed’s F-104 Starfighter:

The 32nd TFS hosted a Royal Canadian Air Force CF-104 unit for two weeks in 1980 while their runway in northern Germany was being resurfaced. I wrangled an invitation to go flying with their commander in one of their two-seat CF-104Ds. He basically gave me the stick after takeoff and let me fly to and from the range. Entering the traffic pattern at Soesterberg an hour later, I was surprised when he didn’t take the controls back. I expected him to do so at any moment, but since he hadn’t I kept flying as if I knew what I was doing. He let me fly it to touchdown, not an easy thing to do from the back seat. After landing he popped the drag chute, which could only be done from the forward cockpit, and took over. I’ll say this about the Zipper: its wings are so small it doesn’t react to turbulence like the big-winged F-15. Trim it up and point it, and it flies through the air like an arrow. What a blast.

You never know who’s going to see what you post on-line. Last month I heard from a Dutch guy who, as a teenager, was one of the enthusiastic kids who lined up along the fence at Soesterberg Air Base, snapping photos of arriving and departing fighters. “I think I have a photo of you taxiing out for your flight in the CF-104,” he led off. How could I not respond to that? 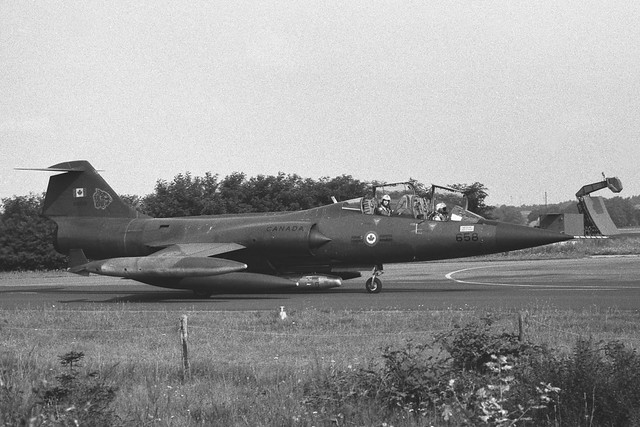 After a brief exchange of emails, he sent the photo. I saw right away the guy in the back seat wasn’t me. There’s a design or stencil on his helmet visor; mine was plain. The jet I flew in wasn’t configured with underwing fuel tanks like the ones in the photo, just tip tanks. The biggest clue was the face: definitely not mine. I think that’s Hambone, one of my Soesterberg squadron mates, who, I was sad to hear, died a few years back.

Update (3/11/21): Another Soesterberg squadron mate, Sundance, read this post and thinks it may be him in the photo … he sent a photo taken of him taxiing out in the same aircraft, so he’s more than likely correct. Sundance, I’m happy to say, is not only alive and kicking, but flying a Chinese-built Nanchang CJ-6 in the skies over Seattle.

Objectively, the most awesome jet I ever piloted was the one I spent my career in: the F-15 Eagle. It could reach a top speed of Mach 2.5, two-and-a-half times the speed of sound, carry eight air-to-air missiles plus 940 20mm rounds in its Vulcan cannon, and see, with its radar, targets in excess of 100 nautical miles away. Even to this day it remains, with 104 kills and zero losses, the most lethal air-to-air fighter of all time.

Emotionally, though, my personal awesomeness award goes to the F-104 Starfighter, the first US fighter capable of flying at twice the speed of sound, marketed in the 1950s as “the missile with a man in it,” the very embodiment of the Age of Speed. Not only was it, in its day, the fastest kid on the block, its wings were so tiny and thin you didn’t dare get slow in it. Its speed gave it both of its best-known nicknames, Zipper and Widowmaker. All those thoughts came to me in a rush the day our visiting Canadians offered me a ride in their two-seater. Widowmaker or no, I jumped at the chance to fly in it. 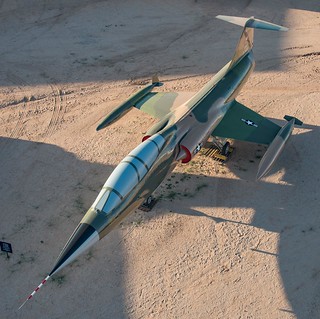 In flight, the tiny wings slice through the air like fletches on the shaft of an arrow. The F-15 had big wings and you felt every random current and bump in the air. There was none of that in the Zipper, the smoothest-flying aircraft I’ve ever been in. Takeoff, cruise, approach, and landing speeds were 20-25 knots faster than those I was used to in the Eagle, but the higher speeds felt right in the Zipper and I quickly got used to them. There were no high-lift devices on the Eagle’s wings, just a pair of flaps to lower before landing; the Zipper had leading- and trailing-edge flaps plus a boundary layer control system to vent high-pressure bleed air over the wings at lower speeds. BLCS, which is used on some other fighters as well, tricks wings into thinking they’re flying faster than they are, allowing pilots to fly a bit slower on landing (but still significantly faster than the speeds I was used to in the Eagle). What you had to remember with BLCS, my Canadian front-seater taught me, was to keep the throttle up all the way to touchdown, because if you cut power early as you do in the Eagle, the BLCS quits working and the wings stop flying.

Update (5/7/21): Reader Bob Clarke sent clarifying information on the ejection seats used in the CF-104 (see his comment below the post). I revised the following paragraph for accuracy.

I remember particularly the leg restraints of the Zipper’s ejection seat, a feature the ACES II seat in the Eagle didn’t have. Before we climbed into the jet, my front-seater helped me fit metal shoe plates over the soles of my boots, sort of like the hot shoe plates motorcycle flat-track racers wear. Each shoe plate had a socket on the heel. Once I was seated in the cockpit, the crew chief leaned in, reached down, and attached cables to the heel sockets. The cables were part of the seat, meant to retract during ejection, their purpose to pull the occupant’s feet and lower legs up snug to the front of the seat and prevent high-speed flailing injuries. That was a new (and very impressive) thing to me. 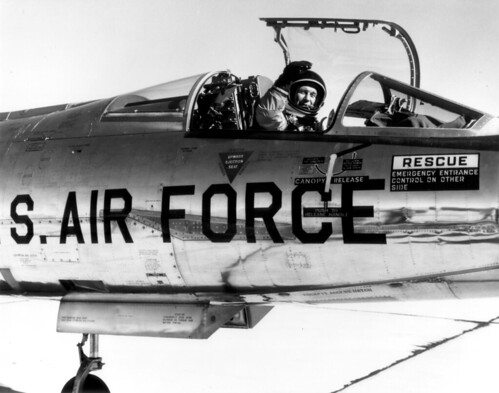 One thing I’ve always wondered about is why the Zipper’s canopy hinges on the left, not the right. Normally you climb into a military fighter jet on its left side. Its a holdover, they say, from cavalry days (you mount horses from the left). With the Zipper, though, you mount from the right. No one really knows why, and the designer, Kelly Johnson, is no longer with us and can’t be asked. Best guess I’ve heard is that the Zipper’s 20mm cannon was on the left, as was the panel you opened to load rounds, and they didn’t want aircraft boarding ladders making dents in the sheet metal covering those important bits.

Last but not least, the distinctive F-104 howl. You don’t hear it inside the cockpit, of course, but when you hear it from the ground you never forget it.

Damn, now that was a jet!