On the interview everyone’s talking about: I hate to say it, but the Trumps seem like they’d scratch the itch so many Americans seem to have for a royal family of our own. They don’t do anything useful, they’re nasty to one another, and they provide at least as much scandal and entertainment as the Winsors provide the Brits.

The CDC’s Guidelines for the Vaccinated came out yesterday, two days after I formulated my own. I’m pleased to see we’re on the same page.

When Donna and I went to the University of Arizona for our first COVID vaccinations, the state and county were running the site. A week or two later the feds took over, so when we went back for our second shots yesterday I looked to see if anything was different.

Physically, everything was the same. If anything, there were more volunteers helping out than before. The big difference was the number of people lined up for shots. In February, there were only a few cars ahead of us in line and we were in and out in 30 minutes (including the mandatory 15-minute observation period). This time there were a hundred cars and trucks in line and we were there for an hour and a half. The doctor who gave us our shots said they’re giving 2,000 vaccinations a day and hoped to get up to 4,000. They’re working, at this one site alone, from 10 AM to 10 PM, seven days a week.

The reason there were so many more people in line this time, I think, can be chalked up to increased supplies, expanded eligibility, and, most importantly, demand. The word is out, and everyone wants the vaccine.

The U of A vaccination site is one of three mass walk-in and drive-through locations in Tucson. In addition, 33 stand-alone and grocery chain pharmacies are now offering shots. All three approved vaccines … Pfizer, Moderna, and Johnson & Johnson … are available, depending on where you go.

We took Mister B with us, not anticipating the long wait, but he loves going in the car with us and was great. Lots of volunteers came up to meet him. We’re taking him to the vet the day after tomorrow for a rabies booster, and even though we made a point of being brave while getting our own shots, I doubt he’ll remember to be brave in turn, poor boy.

They say the second dose of the Pfizer and Moderna vaccines is the spicy one, and I wonder if we’ll experience any effects. So far, no. I felt the second shot going in more than the first, and so did Donna, but otherwise, nothing. We have a full bottle of Tylenol in the medicine cabinet, just in case.

Polly’s been coming by on her off days from Amazon, prepping and painting the guest bedroom, the one she lived in before moving into her own apartment a few months ago. Here she is, practicing her caulking skills: 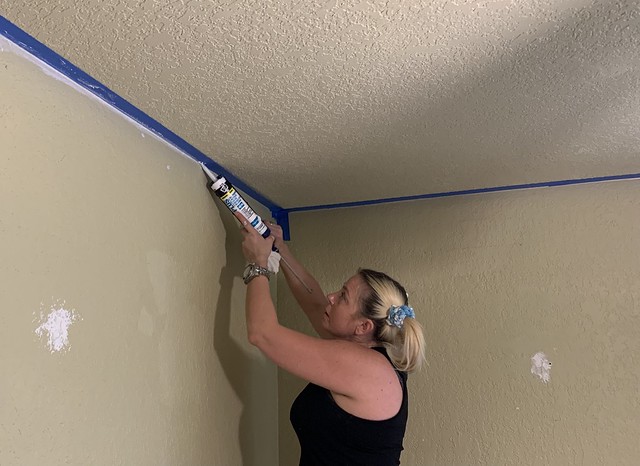 Mister B and I, on one of our morning walks, stopped to listen to a thrasher in a neighbor’s tree. I wasn’t sure what it was at the time, so when we got home I Googled “southern Arizona birds” and went through a long list of wrens, sparrows, grebes, woodpeckers until settling on thrashers. This one, I think, is a curve-billed thrasher.

For a few years after we moved into our house, a mated pair of cactus wrens would yap at us whenever we stepped outside. They seemed to think they owned the place, not us. Watching the thrasher the other day I realized how much we miss those bossy cactus wrens, who moved away years ago. I mentioned them to Donna and she reminded me why they left:

One of the requirements of our mortgage is an annual termite inspection. One year we got what we at first thought was an overzealous inspector. He didn’t like the bushes growing against the back side of our garage and wanted me to cut them down. I got out the chain saw and cut them down at the root. After I dragged the dead bushes away he started making additional demands, and we realized he was looking for a bribe in exchange for a passing grade. We sent him packing and reported him. The cactus wrens’ nest, alas, was in those bushes. If we’d only realized right from the start what that inspector was up to, they’d still be here to boss us around.