If You Can’t Say Anything Nice … Aw, the Hell with That!

I didn’t listen to Rush Limbaugh’s radio show, but like everyone else couldn’t avoid hearing parts of it from time to time. I remember a segment Rush tried to pass off a live roast of Hillary Clinton, but which was actually him alone in the studio cracking wise to short audio clips of Clinton taken from a speech, and realizing that in addition to all the things he took pride in being — misogynist, racist, bully, laugher at people who slip on the ice and hurt themselves, know-nothing, sex tourist, colossal fartbag, all-around hater — he was a coward as well.

Rush is gone, finally, but despite my best efforts, I’m willing to bet Armed Forces Radio & Television Network will keep right on broadcasting his show to US troops stationed overseas. They’ll just recycle archived episodes, as the military newspaper Stars & Stripes did with old Calvin and Hobbes comic strips when Bill Watterson retired.

I have a hard time reconciling the fact that American military troops on the front lines overseas regard both Rush Limbaugh and Calvin and Hobbes as comfort food from home, but they do. Seems like mixing glass shards and feces with your mashed potatoes and gravy, but what do I know?

Here’s something I wrote a year ago, when Rush announced he had terminal lung cancer:

I was at my sister Sue’s bedside as she died of lung cancer in October 2017. She lived a little more than two weeks after being diagnosed with advanced lung cancer. I don’t expect Rush Limbaugh to linger long, although his riches may buy him a little more time. My point is that dying of lung cancer, struggling for breath at the end, is a grim way to go, and that I had hoped Rush would experience a less squalid, more meaningful passing. One that involved an Ebenezer Scrooge-like epiphany where he would see the great harm he has done bringing racist hate out of the closet and back into the mainstream of American life and culture, feel overwhelming remorse, and spend whatever time he has left atoning for his sins.

I hosted a Zoom session for the homeowners’ association board last night. I was president last year, and (as I feared would happen) again this year. One of my goals was to delegate action items to other board members, but I forgot to bring up one of the thornier tasks, badgering the gas company to redo the crappy asphalt patches they made to our streets after recent digging. I didn’t catch it until this morning, when I glanced at my notes from last night. What the hell, I’ll suck that one up and do it myself. 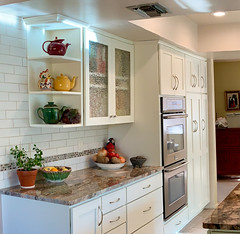 Paint started peeling on the corner shelves attached to one of our new kitchen cabinets. Knowing the contractor was coming this morning to replace them, I emptied the cookbooks from the adjoining cabinet so he could get to the screws.

He called an hour ago. The replacement shelves didn’t come in and the job’s off another week. I put the cookbooks back, a sizable collection going back to the first days of our marriage, and next time will wait until he’s actually here before I move them again.

Researchers are saying a single dose of the Pfizer COVID-19 vaccine is 93% effective, and I’m worried the current policy of giving everyone a second dose will be written off in the face of continuing vaccine shortages. I don’t know about you, but I want ’em both. We’re scheduled for our second vaccinations on the 8th of March, but a lot can happen between now and then.

Apropos of nothing, look at these beautiful shiny Poblanos Donna brought home. 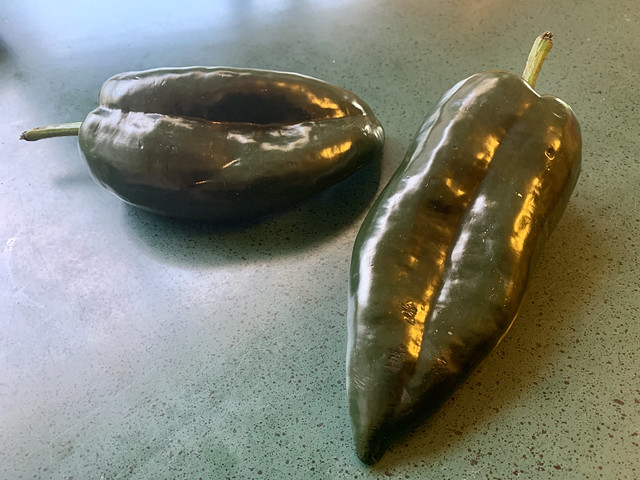 Alas, there are only two, not the four or five Donna normally gets for chiles rellenos, so she must plan to use them for something else. Well, whatever that something will turn out to be, I’m excited.