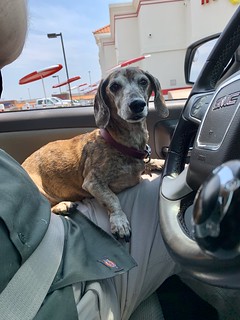 The library sent an email to remind us a book Donna borrowed is coming due. I told her I’d take it back when she’s done. I must have uttered the L-word, because Mister B jumped down from the couch and ran to the back door, which leads to the garage, wherein waits the truck and a ride therein. He always accompanies me on trips to the library, and he’s learned the word.

A friend’s trying to find a home for two 14-year-old dachshunds, bonded siblings who’ve outlived their humans, and I’m losing sleep over it. It’s a recipe for heartache, though; they’ll likely live only another year or two; worse, one is blind and would surely drown in our pool before then. But oh how I want to take them in, not just for me but for Mister B, who’s become too human by far and needs a canine companion to make up for Maxie, who died last November. Donna says we can’t afford it, and she’s right of course: considering the money we’ve spent on our dachshunds’ health and dental care (and with dachshunds, occasional back surgeries), it’s a bad idea. But try telling that to your heart (actually, given how much longer Donna and I can expect to live and care for another pet, this might be the last time we could realistically take in a young dog … not a puppy, but a 2- or 3-year-old).

If you’re looking for a good zombie flick, “Train to Busan” is streaming on Amazon Prime. 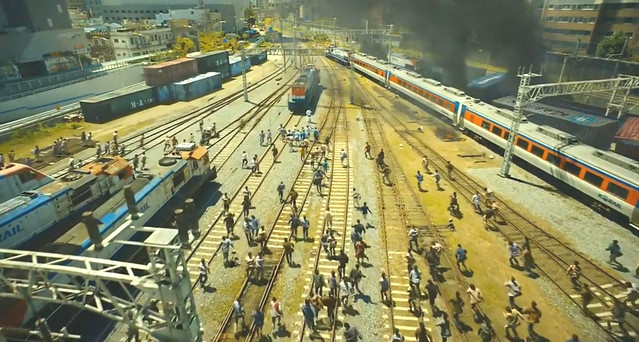 Zombie movies and I agreed to a trial separation several years ago, but this one rekindled the romance. Man, the Korean film industry puts out some great stuff, and there’s a lot of it on Netflix and Amazon Prime. All of it best watched in the original Korean with English subtitles, natch.

That’s it from me today. See you soon!