Oh No, Not Buffy! 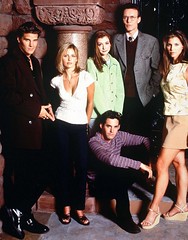 It’s been a rough week for this Buffy fan, as actors and crewmembers who worked on that and other Joss Whedon productions come forward to accuse him of abuse and misconduct. There’s an entertainment section in the online news digest I check daily, and whenever I see links to stories about Buffy the Vampire Slayer or any of the actors who starred in it, I obsessively click on them, even when they’re obviously fluff. When it comes to this week’s news, I don’t want to know … but can’t stop clicking.

I missed Buffy when it first aired. Friends told me I’d love it, but I didn’t believe them. When I finally started watching it on Netflix three years ago, I was instantly hooked. So much so that when Netflix pulled it in mid-watch, I borrowed a friend’s DVD box set to carry me through to the end. The following Christmas Donna gave me my own Buffy box set and over the course of several months she watched all seven seasons with me. This year I watched the entire series a third time, streaming one episode every night on Hulu after Donna went to bed.

The revelations about Whedon’s abusive behavior, not only on the set of Buffy but other shows I’ve watched and enjoyed, Angel and Firefly in particular, are an unsettling peek behind the curtain. Such stories, ones that reveal long-standing patterns of abusive or predatory behavior, are in my experience always true. I tell myself the shows are one thing; Whedon another.

I’d heard stuff about Whedon before, in particular how he reacted to Charisma Carpenter’s pregnancy during the taping of Angel, and how he disappeared her from the series. For sure, there’s a great difference in the pre- and post-Carpenter seasons of Angel. As far as I’m concerned, the air went out of the series after she was gone. I probably won’t watch Angel again, or if I do it’ll only be the first three seasons when her character, Cordelia, carried the show. Buffy, though? I’ll absolutely watch it again.

I mentioned a while back my love of The Expanse, the television adaption of James S.A. Corey’s science fiction novels, specifically the societies it depicts, where women and men, while remaining women and men, are equals in every field, no assumptions made, no questions asked. That started, in many ways, with Joss Whedon and Buffy, then carried on through Firefly. It’s since gained strength with Veronica Mars and The Rookie, shows Joss Whedon is not involved in, even though some of the actors cut their teeth on earlier Whedon projects. 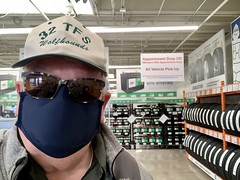 I visited Costco twice this week, once to order new tires for the truck, once again to have them put on. Both times I wore a cloth face mask with an insertable filter. We started wearing two-layer masks after reading that single-layer ones aren’t effective. I have to say I understand now where people who claim they have a hard time breathing through face masks are coming from. If I don’t pace myself while wearing the two-layer mask, I feel smothered, so I take it slow and easy if there’s going to be a lot of walking, as there always is at Costco. But hey, if I can do it, so can you. Don’t be a maskhole.

We may be able to go back to single-layer masks soon. Eligibility for the COVID-19 vaccine varies from state to state, and here in Arizona from county to county, but our county just lowered eligibility to age to 70 and Donna and I are scheduled for our first shots on Monday at the University of Arizona drive-thru vaccination site. It’s such a relief knowing that’s coming. Donna’s sister Georgie and husband Don are coming to visit in early April, and we want to rent a nice car and take them to Flagstaff and the Grand Canyon. They live in Michigan, and if things work out right, they’ll have had their vaccinations by then as well. A road trip to Las Vegas to visit our son, daughter in law, and grandson will be next. Gregory and Beth, at least, should be vaccinated by then. 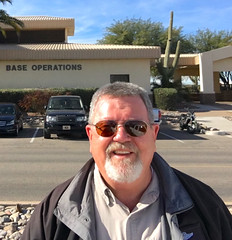 I run hot and cold on facial hair. Lately, with videos of the riotous lynch mob invading the Capitol front and center in Trump’s Senate impeachment trial, I’ve been proud to be clean-shaven. But then Facebook shoved this old selfie in front of me in one of those remember-when posts, and it hit me again how much, to paraphrase the late, great Nora Ephron, I hate my neck … and how well the goatee I once wore hid it.

I’ve got wattles, you see. They come with age. Fat too, but even if I starved, at 74 they’re here to stay. Reagan had ’em, and I hated him too. Beards give wattles something to hide behind, at least to some extent. Before my latest clean-shaven incarnation I wore a full one, but if you’ll forgive a bit of vanity, I really like that photo from a few years ago, and this time I’m going for another goatee. Best of both worlds: something to hide my neck, and I still get to shave at least part of my face every morning. Oh, and the Ray-Ban aviators, à la Joe Biden? Still have ’em.

Coyote alert: a pack of six well-fed, healthy-looking coyotes traipsed through our front yard earlier this morning, and I waited a couple of hours before taking Mister B out for his morning constitutional. That may have been a mistake, because he pooped on the living room carpet.

Today’s kitchen project: cornbread and a pot of chili. It’s a perfect day for it. What are you up to?