It drives me crazy how the media pussyfoots around Republican lies by reporting “no evidence of widespread fraud.” Why “widespread?” Why not “no fraud?”

A friend explains it this way: “The statements regarding existence of fraud are generally qualified by using the word ‘widespread’ because the election could only be overturned by widespread fraud. Small local bits of fraud, if they existed, would not be sufficient to alter the election outcome.”

I get the legalistic side of it, but. …

The GOP has for years carried out a campaign to restrict voting rights. That campaign is based on the lie that voter fraud exists. They’ve beaten the drum so often and hard conservative voters now take voter fraud as a given, never mind there’s no such thing.

When the media reports “no evidence of widespread fraud,” what people hear is confirmation some voter fraud does exist, that it’s real. Which makes it easier for Trump to incite mobs, and possibly armed vigilantes, to go after election officials. Which makes it easier for Republican state governors and legislatures to get away with imposing tighter voter ID restrictions and suppressing minority votes. Which’ll make it easier for some future, smarter authoritarian president to send brownshirts to voting tabulation centers with orders to toss out “fraudulent” ballots from absentee, early, and gerrymandered Democratic district voters.

How many cases of actual, documented voter fraud have there been? The only examples I’ve heard of have involved Republicans caught trying to vote twice, and there’ve been only one or two such cases. If there were thousands of such cases, okay, it would be correct to say voter fraud exists. But there aren’t. Onsies and twosies are so insignificant as to not count at all: there is no voter fraud.

As to the claims of fraud advanced by the losers, I hate having to look to the foreign press to debunk GOP claims of voter fraud without using the weasel phrase “no evidence of widespread fraud.”

Donna and I celebrated our 55th wedding anniversary last week. It’s natural to reminisce on such an occasion. Young and pretty we may have been, but we were definitely poor. Donna was always a great cook, but back then she had to make do with cheap ingredients. She had a few go-to recipes for when company came over, fellow students as poor as we, bringing gallon jugs of Red Mountain Burgundy in exchange for dinner.

One of Donna’s crowd-pleasers was a baked stuffed zucchini, a large one cut lengthwise in halves with the inner parts scooped out and stuffed with a meatloaf mix, topped with tomato sauce. She used to hollow out and stuff loaves of French bread the same way. Another was polenta, the food of Italian working families (and Roman legionnaires before them), in the 1970s cheaper even than pasta.

I jokingly mentioned the tuna casseroles Donna used to make, another staple of our younger days, and a couple of nights after our anniversary she surprised me with one, complete with crumbled potato chips on top. It’s been almost 50 years since we had one; it wasn’t half bad. 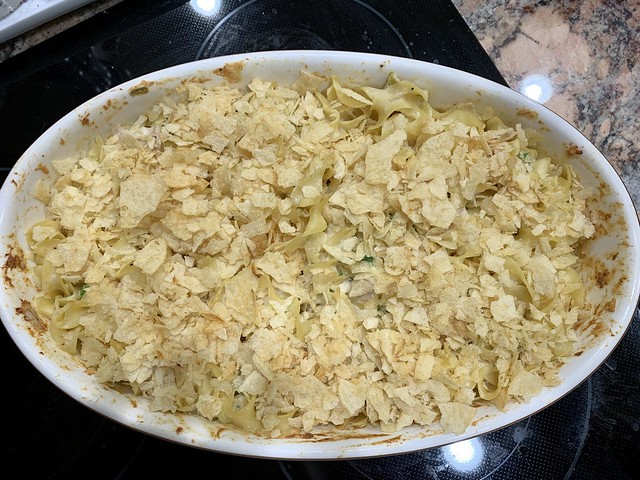 I’m tempted to ask friends our age to share recipes from their impoverished student days, and start a cheap college food section on my cooking blog. Students today have ramen and all sorts of microwavable dinners-in-a-cup to choose from; apart from Lipton’s Instant Chicken Noodle mix, most of what we ate in the early 1970s was put together and cooked from scratch. And most if it, at least as I remember, was filling and good, as last week’s tuna casserole demonstrated.

God, I’m just realizing how “we had to walk three miles uphill in freezing blizzards to get to school when we were young” this all sounds!