Twelve Is the New Seven 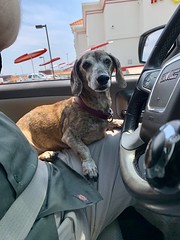 Mister B turned 12 on Sunday. He came to us with a complete set of records, so we know his birthdate. That’s not the case with Maxie, who had no paper trail. Our best guess is she’s Mister B’s age, maybe a year or so older.

I took birthday boy to the feed store to pick his own gift. We haven’t been there for a couple of years, but of course he knew right where we were the instant I turned into the parking lot, and once inside tugged me straight to the back wall where they keep a row of galvanized buckets filled with balls. His favorites are the fuzzy yellow tennis balls. There were two sizes, regular and small, so we got some of each. The small ones are the hands-down favorites, and no wonder — he can get his mouth around them. He played for two hours yesterday, alternating between bringing balls to me to throw and throwing them himself, which he does by holding them loosely in his jaws and flicking his head to the side. We played again this morning after his walk, and he’s now curled up in his office doggie bed with one.

Thank goodness for books and streaming TV, because this week’s going to be one long Trump rally. Yesterday, a prominent Twitter “blue check” personality (I wish I could think of a better thing to call the type … a Twitter face card, perhaps?) posted this question: “Anyone else tonight experiencing pain in their heart because a family member is truly lost to the Trump cult?” Hundreds have responded with tales of estrangement. The ongoing conversation now includes QAnon, tearing families apart at an accelerated rate thanks to Trump’s recent very fine people-style endorsement.

At least one of my sisters and two of Donna’s are MAGA types. There’s no tearing apart, no pain in our hearts. They’re still family; we simply don’t talk. It’s no doubt harder for siblings who live in the same town; that’s not the case with either of us. The hardest hit are those who have become estranged from their own parents, or conversely from their children. Our folks are gone, and they were gone before Fox News could have got its claws into them; I shudder to think how hard it must be to lose a parent to the racism and resentment rightwing media wallows in. Our kids are probably a little more conservative than we are, but definitely not dark-siders. So far we’ve lucked out.

Trumpist friends and associates are harder to deal with, if only because they’re the ones most of us have to live and work with day after day. The pandemic, and the social isolation we live with now, has made cutting such people out of our lives easier. I, for one, will have no trouble not re-establishing relationships with them when life returns to normal. They are truly lost … lost to Trump, lost to me.

Our right-thinking trusted-bubble friend Mary Anne was over for dinner and a movie last night. Well, not a movie … we watched two episodes of Justified on Hulu, then an episode of The Mandolarian (yes, we still pay for Disney+, but will probably unsubscribe when we finish that particular show). Donna made a lovely Niçoise from a New York Times cooking column recipe, and just to show off, flan. Tricky stuff, flan, but Donna’s made it three or four times now and seems to have it down. Flan, scratch-made chiles rellenos, gnocci, lumpia, stuffed grape leaves … I’m awestruck by the ambitious cooking projects she undertakes. And I badly need to get back on my kitchen game, just to be able to hold my head up.

As you can tell from the photo, the salade Niçoise was scaled for rather more than three; we sent a sizeable portion home with Mary Anne in a ziplock bag. I’ll probably have some for lunch today, along with what’s left of the flan (that is if Polly hasn’t been at it).