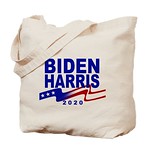 I caught only parts of this week’s Democratic Party convention, but did tune in Thursday night to hear Joe Biden accept the nomination. Sorry now I didn’t watch Michelle Obama and Kamala Harris’ speeches earlier in the week. The virtual convention format seemed odd at first but quickly grew on me. It’ll be interesting to see how the GOP comes off in comparison. Not that I’ll be watching their convention next week, but with the wall-to-wall media coverage it’s going to get, even with the best will in the world I won’t be able to avoid it entirely.

As soon as Joe announced Kamala as his running mate, I went to his campaign site to order a magnetic Biden/Harris sticker for my truck. I drove around with an Obama/Biden magnet in 2008, recycled it in 2012, then switched to a Clinton/Kaine magnet in 2016. The Biden campaign, it turns out, offers only conventional vinyl bumper stickers, the kind you have to scrape off with a razor.

I DM’d Joe on Twitter, asking him to tell his campaign people to start selling magnetic stickers, explaining that I want my money to go to his campaign and not some third-party vendor. Joe’s a car guy, the owner of the classic Corvette we see in some of his campaign ads, and what car lover doesn’t cringe at the thought of putting vinyl bumper stickers on their beautiful rides? Joe didn’t answer, and a week later his campaign site store still doesn’t sell magnetic stickers. I wound up buying one from somewhere else.

I clean out my blog’s comment spam folder every other week and normally pay no attention to what’s in it. Today, though, I noticed the first entry was a long article about a TV series called “Pretty Little Liars,” copied verbatim from somewhere on the net and appended as a comment to one of my older entries. Comment spam normally consists of a single paragraph; printed, this one would fill three single-spaced pages. Like all spam, of course, it contained a link inserted by the spammer: in this case a link to a mail-order bride site called “Moldova Girls,” possibly the same one our nation’s first lady came from.

Every week or so I get an email from someone offering to supply “content” for Paul’s Thing in the form of a guest post. I imagine the stuff I’m seeing in my spam trap is exactly the kind of guest post I’d get if I ever took one of them up on it.

They’re always at the door, trying the lock, jiggling the handle, sticking their hands inside the mail slot. My spam filter isn’t fooled by these long comments, but spammers must be having some success with the longer format, otherwise they wouldn’t be wasting their time on it. Maybe some of my own blog entries are being proffered as guest posts to other bloggers, or showing up as comment spam on their blogs. Now there’s a thought. Well, anything for publicity, right?

We started walking Mister B again, early in the morning before the pavement heats up, but after one walk he limped the rest of the day. We checked his paws for thorns and rocks and found nothing, but decided to hold off on the walks for a few days. The limp went away so I walked him again this morning. We’ll watch him to see if the limp comes back.

I snapped two quick iPhone shots of Mister B in the drive-thru lane at In-N-Out yesterday. It was nothing I did intentionally, but in one shot the focus is on his reflection in the rearview mirror and in the other it’s on the tip of his nose. I’ll have to pay more attention to what’s centered in the frame before I click, because that’s the focus point. You learn something every day. When I say you I mean me, because everyone else knew that already. Actually, I knew it too, but who pays attention when setting up a cell phone camera shot?

One of the things I found while going through old junk the other day was the kneeboard I flew with at Kadena, complete with a mission data card for a four-ship air combat training sortie I led. 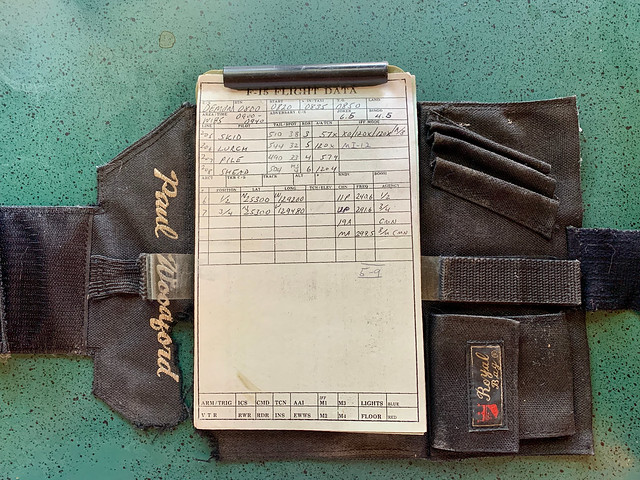 Lurch and I have stayed in touch, but I don’t know what Pile and Shead are up to these days. For the life of me, I can’t remember their mortal names, otherwise I’d look them up.