A mixed four-ship of US Air Force A-10 Warthogs and Arizona Air National Guard F-16 Vipers flew over Tucson last Thursday to honor healthcare workers and boost the morale of locked-down Tucsonans in general. Part of the route was over the Catalina Highway, which borders our back yard. I took several photos but this one is my favorite: 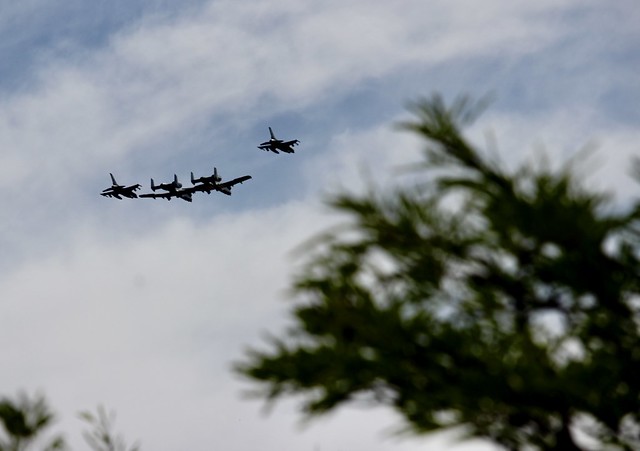 It’s the last of four sequential shots I took through a telephoto lens mounted on a DSLR Canon. They kind of snuck up on me and I had to shoot fast. This one’s a little blurred and the jets are going away, but I managed to get one of our mesquite trees in the frame, and it lends some scale.

If you’re on Twitter you’ve probably noticed some opposition to flyovers by the Blue Angels, Thunderbirds, and locally-based military aircraft like those that flew over Tucson last week. Well-meaning citizens question the cost of conducting these flights, saying their taxes could be better spent on PPE for healthcare workers, education, food for the poor, and so forth.

No, the money would have been spent on training flights regardless. The military continues to train, pandemic or no. Sailors gotta sail, soldiers gotta soldier, aviators gotta aviate. The 2020 air show season has been canceled, but pilots and personnel assigned to the Blue Angels and Thunderbirds continue to train, and if local training flights can instead be conducted as flyovers of American cities, the cost is no different. If a local Air Force or Navy base wants to reschedule a local training sortie as a morale flyover, the cost is the same. The sortie would have been flown either way.

I think, based on most social media reactions I’m seeing, the flyovers are in fact a morale booster. And it’s not just the military conducting them. One of my former F-15 squadron mates still flies, and participated in a civilian flyover of Seattle and Bremerton on VE Day last week. He sent me a couple of brilliant photos taken from a chase plane. In the photos, Sundance is flying a Chinese aerobatic trainer, a Nanchang CJ-6 (the green plane): 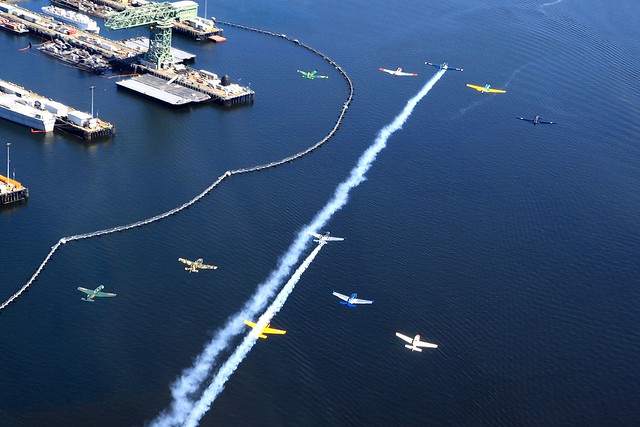 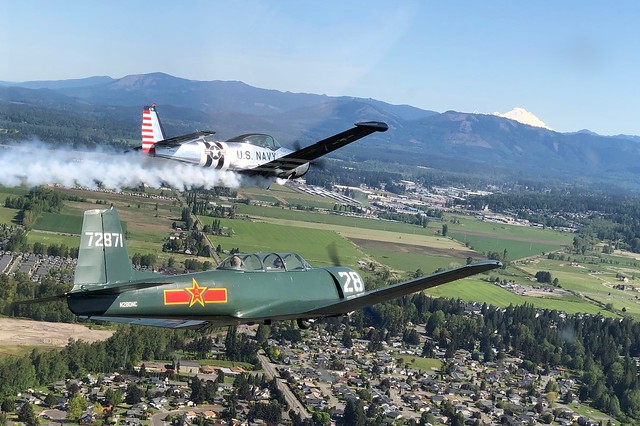 Not many retired military pilots can afford to own or even rent airplanes, but a few of my friends have managed to pull it off, and I think that’s great. I have my motorcycle, so I’m not jealous, exactly … it’s more that I’m happy for them, and in my next life maybe will manage to pull it off too (I am jealous as hell).

Shit hot, Sundance. Wish I could have been there!