Anti-intellectualism has been a constant thread winding its way through our political and cultural life, nurtured by the false notion that democracy means that “my ignorance is just as good as your knowledge.”
— Isaac Asimov, 1920-1992

As the friend who forwarded this unattributed screed said to me, “I don’t normally pass on this kind of stuff, but this needs wider exposure”:

You spend 30 years of your life and $50 billion of your own dollars supporting humanitarian causes. You directly save hundreds of thousands of lives in Southeast Asia by providing anti-malaria netting, you drop infant mortality rates throughout the entire developing world by funding vaccine programs including inoculating 40 million children against polio, and, amongst a plethora of philanthropic endeavors, you fund free educational platforms so people can have free access to high quality education.

Then, after donating half of your wealth to charity and pledging 90% of the remainder to charity in your will, arguably doing more to better life on earth for humanity than any other human ever to live …

You hop on the internet only to find a million scientifically illiterate imbeciles using the very personal computers you pretty much invented to call you a child-murdering arch villain anti-Christ because they watched a YouTube video made by some yokel with the brain-power of a fucking potato.

Bill Gates, of course, is providing massive financial support to the development of a vaccine for Coronavirus. With that in mind, I offer a thought of my own:

Won’t it be weird if it turns out one of the long-term effects of COVID-19 on young victims is autism, and then they come up with a vaccine?

Too subtle? I lump a lot of people in amongst the anti-intellectuals, and that includes anti-vaxxers.

What’s really weird, though, is dropping in on the know-nothing message boards and discovering they think we’re the stupid ones! Well, maybe they don’t exactly think it, but it’s what they tell each other to keep their spirits up.

By the way, I want to give a plug to comedian Sarah Cooper. The media has so normalized Trump, most of us just tune out the things he says. What Sarah gets is that when we experience his words coming out of someone else’s mouth, his appalling idiocy hits like a battering ram.

Mister B went to the vet Thursday and had some teeth pulled. Seven of them, and that’s on top of the five or six they pulled last year. Poor guy. He was down in the dumps Thursday afternoon and most of Friday, but today he’s his old self again, and, we hope, a lot more comfortable eating his breakfast and dinner. We took him for another walk in Agua Caliente Park this morning, where he got a good workout. 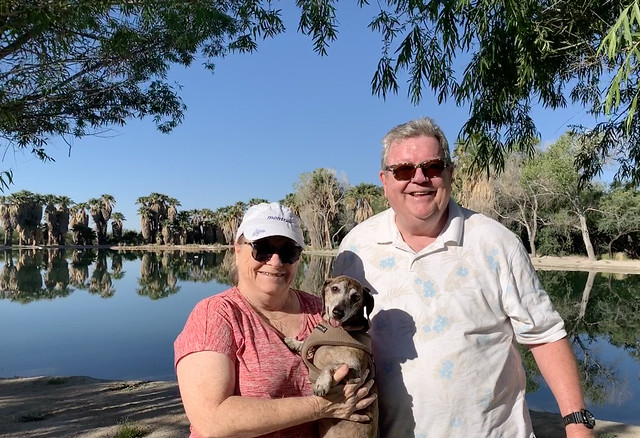