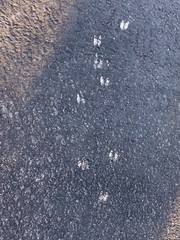 Every Monday afternoon I wheel the garbage bins out to the street. The Waste Management trucks come Tuesday morning.

Last night around eleven-thirty Mister B and I heard a thump outside. He knew right away it was the neighborhood javelina pack and started barking. I suspected the same and went out to investigate. Yup, javelina. They’d knocked over our recycle bin but for some reason left the regular bin standing. I could see that much from the front door, but as I walked toward the street to pick up the one they’d tipped over, I heard them nearby and went back to get a flashlight. Thus armed, I returned to the scene of the crime. Shining my light up the street I saw their eyes reflecting back. I jumped, because they were much closer than I’d thought, rooting through the neighbor’s overturned bins in the next driveway. I beat a quick retreat, hoping his garbage would satisfy them and they’d leave us alone.

I knew better, though. When I came to bed a few minutes later I told Donna what was going on outside, and she suggested I go back out and chase them away. No way, I said. Reader, I ask you, did I have a good reason for chickening out?

The dogs began to stir around five this morning, so I got up, covered my nakedness, and went out to assess the damage. The javelina had indeed revisited us, as I knew they would. Our regular bin was on its side, plastic kitchen garbage bags dragged out onto the street and shredded. Wet lettuce, coffee grounds, chicken bones, grapefruit rinds, eggshells everywhere. I got a rake and broom out of the shed and went to work, and by five-thirty had it all cleaned up. As I walked back to the house I heard the garbage truck turning into our subdivision.

No, I did not clean up our neighbor’s mess. Maybe I should have, but I’m still unhappy with him over the tree-cutting incident in the DMZ between our homes. I try to repress my spiteful side, but sometimes fail.

Since we were up, Mister B and I went for an early walk. Unless everyone else had been up at the crack of dawn to clean up, the javelina pack had bypassed other homes on our street. Around the corner, though, several houses down, we came upon another scene of carnage. If wildlife used the streets they’d stop to sample everyone’s refuse, but since they cut through the brush and scrub between homes and yards, they never hit more than a few of us at a time. It was our turn, and there’s no point getting upset about it.

Speaking of upset, Donna tells me she hates Mothers’ Day. It’s not just that it’s a manufactured, commercial event, it’s that it never lives up to expectations. Someone always falls short … a husband buys expensive, unwanted flowers; a child forgets to say Happy Mothers’ Day, one damn thing or another. Well, if I may say so, I hate it too. It’s a minefield, is what it is, and husbands everywhere would live happier lives without the pressure. It should go without saying that Fathers’ Day sucks too, and both days should be consigned to the garbage bin of history. Let the javelina sort it out.

Polly Index: all is well. There was a fire earlier yesterday at the Amazon fulfillment center where she works. They evacuated the day shift, but the fire was confined to a cardboard compactor and everything was back to normal in time for Polly’s night shift. She looked at an apartment before going to work yesterday and we’ll ask her about it when she wakes up. Keep those fingers crossed, everyone!

One thought on “Night Visitors”