You (Still) Can’t Read That! 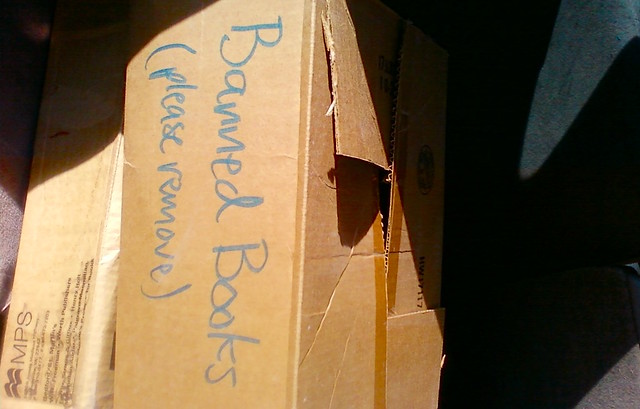 I stopped writing regular YCRT! columns in November 2018. Why?

Here’s what I said at the time:

As of this column I’m relieving myself of the day-to-day tracking of news about book bannings, challenges, and censorship, and of producing new YCRT! columns on a regular basis. I’m still interested in banned books and will continue to read and review them, but those reviews will be folded into regular book review posts. If a news story about book banning catches my eye I’ll comment on it in a regular blog post, along with other topics.

Nothing has changed, but stories like this still piss me off:

The school board for the Matanuska-Susitna Borough School District, which includes the towns of Palmer and Wasilla, Alaska, voted last Wednesday to bar teachers from using five “controversial” books that parents had objected to several times in the past. The school board meeting was mostly unattended, with several members participating only by phone, so there were no teachers or parents there to speak up in defense of the books. Jesus, you have to watch rightwing idiots ALL THE TIME, even during a pandemic.

The books those board members sneakily banned while those who might have defended them were in quarantine?

Each one an award-winner, each one widely taught in elective college-prep English classes all over the country, each one previously reviewed and approved by the same school board now banning them.

Friends have been sending me links to news articles covering the story, and my first response to them was that these book banning board members live in another world, one where they had either never heard of the dangers of book banning, or possibly one where they had heard of it and thought “what’s not to like?” In either case, they live in a world where everyone’s supposed to think the same, a world where the introduction of new thoughts and experiences might lead to who-knows-what, a world where arguments against suppressing ideas simply do not penetrate.

But those who ban and burn books aren’t just know-nothings. A whopping proportion of their anti-intellectualism is composed of resentment and spite. A lot of what they do is meant to get back at those who (they think) believe themselves superior to them: college-educated snobs, English teachers, libs in general. Such has got to be the case with a least one book on the Wasilla banished list, “The Great Gatsby.” It’s probably a stretch to think any of these school board book banners ever went to college, but it’s very likely whoever singled out Gatsby remembers struggling with it in high school and is taking delight in getting even for once having been forced to read something more demanding than a comic book.

The good news is that local teachers, parents, students, and other school board members learned about the backdoor book banning and (I predict) will reverse it, if the conservative board members having become national laughingstocks doesn’t do the trick first. According to followup reports, kids are curious about the fuss, and all five books are suddenly in demand in Palmer and Wasilla.

One more good thing, at least on a personal level: I knew four of the five banned books, but not Tim O’Brien’s “The Things They Carried.” Well, it’s on my Kindle now and I’ll post a banned book review here as soon as I’ve read it.