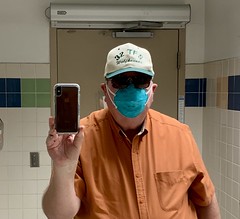 Donna’s military ID card expired ten days ago. With COVID-19, casually strolling into the base pass & ID office has become a be-no; you have to have an appointment and the first available was at 1000 hours this morning.

We anticipated the worst: long lines to get on base, hostile grilling by gate guards, a disorganized mess at the pass & ID office, demands for obscure documents not listed as part of the required paperwork … well, my military brothers and sisters know what I mean. I’m delighted to say none of that happened. It was the best pass & ID experience either one of us have ever had; we were in and out in ten minutes. I hope the new appointment system (which, by the way, many state DMVs have also implemented, including Arizona) stays in place after the pandemic.

Today was also the first day everyone had to mask up to get into the base exchange and commissary, staff and patrons alike. Very few people have access to n95 masks and there were a lot of home-made rigs in evidence, including those worn by the GIs stationed at the commissary entrance to tell customers about the new requirement. Hard to see, but the airman on the left was wearing one with a camo print; pretty cool though probably not very effective. The other guy, a little blurry through my windshield, looked to be wearing a winter issue scarf. 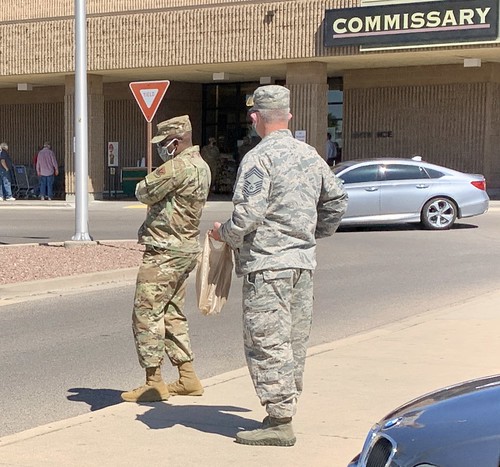 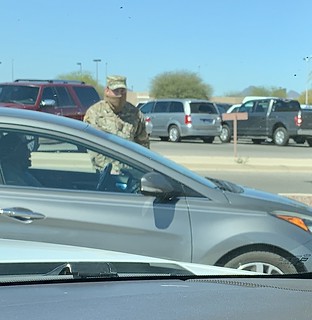 The line to get into the commissary probably wasn’t any worse than the ones at Costco and Walmart. The new rule is that the commissary’s only open for active-duty until 1030; these are mostly retired folks and dependents waiting to get in. Once they opened the door to us, the line moved quickly. 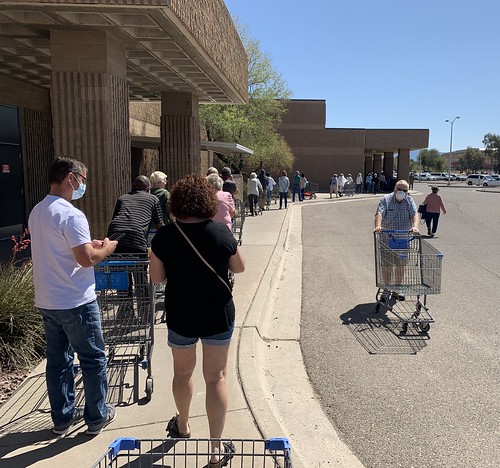 Inside, there was no flour, no hand sanitizer or disinfectant wipes, but otherwise the shelves were reasonably well stocked. Donna found rice, which was a surprise, and I scored a couple of bone-in ribeyes … hard to find even in normal times. You know I’m grilling tonight! We’re also going to watch Parasite, which just started streaming on Hulu.

Polly Index: she’s still working, but in this morning’s news I read that a worker at her Amazon fulfillment center tested positive. They didn’t say they were going to shut the facility down, though, as happened after a single worker tested positive at a similar Amazon warehouse in New York. I’m okay with that. Perfect safety means no jobs, no income for anyone, everything grinding to a halt. Good safety means testing, sending the positives home, giving everything a thorough wipe-down, and getting back to work.

I’m coming around to the notion of settling for good rather than perfect safety in order to have a functioning economy and society. My thoughts are still evolving on that score, but for now, it might be interesting to keep an eye on Sweden. 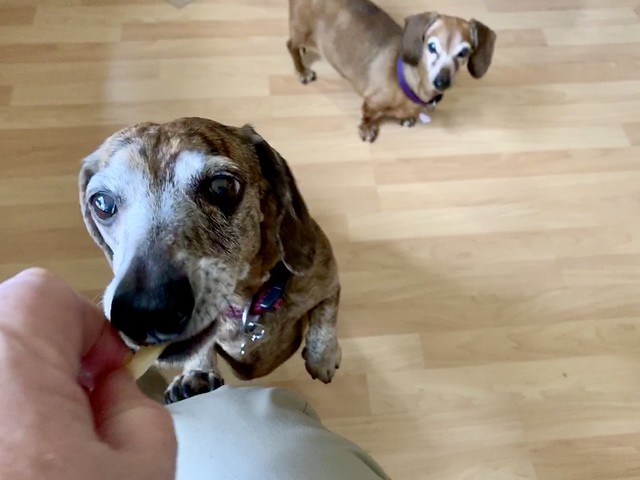 I shouldn’t, but I always give the pups a pinch of whatever I’m having for lunch. They’re good about taking turns but are sharp observers and I have to pinch off equal portions for Maxie and Mister B. Equal not merely in size: if Mister B gets a bit of hamburger with cheese on it, Maxie’s better have cheese on it too. Or so I choose to think … and it pleases me to think so.