Is mail forwarding no longer a thing? I don’t know if people have gotten out of the habit of filing change-of-address forms with the post office, or if the post office still tracks stuff like that. Twice now, Christmas letters to a half-sister have come back marked undeliverable. The first time, two years ago, we called my other half-sister (they both live in the same town), got the new address, and reposted the letter. Apparently the first half-sister moved again after that, because it happened again last year. Donna called her yesterday, got the new address, and dug out an Easter card to send along with the letter that came back. She left it on my desk so I could write a note and sign it. Reader, forgive me, but the note wasn’t one of my best. The spirit had done up and left me.

Most everything’s shut down here, but the air force base is still open to retiree scum. We have an appointment there Friday morning to get Donna a new military ID card, and will swing by the commissary afterward to see if it has any of the things we need. We’re still in good shape, food- and supply-wise, but I’m beginning to wonder if the American consumer supply chain is as robust as politicians claim it is, because it sure doesn’t seem to be catching up with demand. 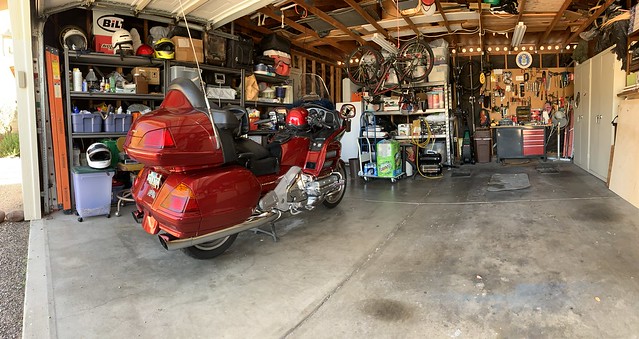 The motor (pronounced mo-tor … I love that ad!) has been sitting on its centerstand for a couple of weeks now, hooked up to a trickle charger. The other day, feeling bad for the both of us, I took it for a spin through the neighborhood. There’s no prohibition against riding, not that I’ve heard of, but I worry that if I go on a long ride something will happen that’ll require me to seek help, thereby risking exposure. My son’s still going on long rides from his home in Las Vegas, occasionally with motorcycle buddies (keeping mutual distance, to be sure), but he tells me it’s getting harder: Nevada has closed the scenic roads around Lake Mead to all but residents, and California’s starting to barricade side roads in Death Valley. 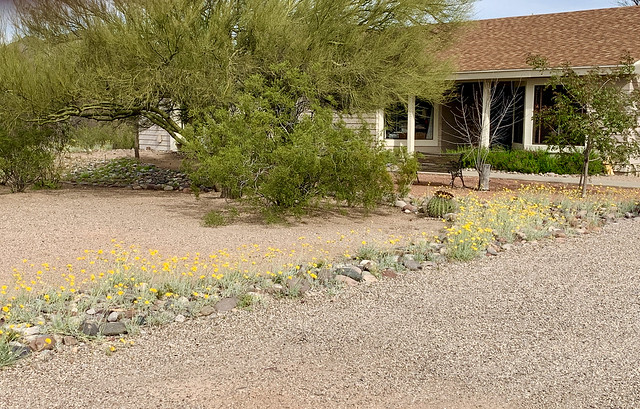 Our daisies are almost bright enough to light the driveway at night. Many an evening, when we were at Armed Forces Staff College in Virginia, we’d party with classmates at the NAS Norfolk officers’ club, which marked its circular driveway with blue recessed taxiway lights. I envied those and at one time thought about installing them alongside our driveway here, but realized if I did I’d become the living embodiment of a stereotype: How do you know someone’s a pilot? Don’t worry, he’ll tell you!

My Hash House Harrier brothers and sisters, unable to gather and run trail in these shelter-in-place days, have taken to virtual hashing on social media. Which is good. And not so good.

I long ago left most of the older, unmoderated Facebook hashing groups, which had turned into sex talk message boards. I know I come across as a prude here, but the sex talk that drove me away from those groups wasn’t merely degrading to women, a lot of it was downright misogynistic, as bad as the anti-Semitism and racism the wanna-be nazis spout.

So someone started a new Facebook hashing group in response to the COVID-19 pandemic and I naively joined. In my defense, the new group started out strong, with hashers from all over posting greetings, introductions, and favorite hashing photos. Sadly, it didn’t take long for the nasty boys to show up.

Ah, well. I guess I am a prude. Gotta ask, though, you ladies who put up with this shit, are you perchance the ones who voted for Trump? Oh, and now hashers are explaining Rule #1 (there are no rules) to me. Huh, Flying Booger didn’t know that (insert sarcastic face emoji).