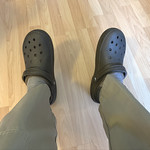 My right foot wants to slide off the motorcycle footpeg. It’s partly caused by alignment differences between my replacement knees (I never have this problem with the left foot), but is more a matter what I have on my feet. Some shoes and boots have soles that resist sliding, some don’t.

Yesterday I wore Crocs for a ride to the corner library and back. They stayed put on the pegs, but I felt unsafe: in a spill they’d come right off. I have a pair of motorcycle boots that grip the pegs well. The thing is they’re a pain to put on and take off for short rides around town (I always wear them on long rides). Still, I try to be a good-citizen ATGATT rider (all the gear/all the time), and I’ll have to make myself take the extra time to lace them up snug and close the ski boot-style clamps.

In my second or third year in Alaska, after one of our squadron-mates ejected from an out-of-control F-15 and spent most of a day in freezing conditions on the side of a mountain waiting for search & rescue, Alaskan Air Command issued Sorels, snow boots with thick fleece liners, to all aircrew members. I flew with them once or twice, but quickly went back to standard flight boots. The Sorels, I feared, wouldn’t stay on during an ejection, and there I’d be, barefoot in the ice and snow. Regular flight boots, on the other hand, had been tried and tested in hundreds of ejections over the years (they were so good, in fact, that they were sometimes found a mile or more from the body, with the feet still inside). The answer, for me, was to order my boots one size too large and wear thick wool socks.

There’d been earlier attempts to get Alaska aircrew members fly in bunny boots, white rubber boots with an insulating layer of air between the inner and outer surface, and in fact most wore them and stuck with them even after they got the Sorels. But bunny boots were too big and clumsy for the rudder and brake pedals in fighter cockpits, so pilots in my unit didn’t wear them. I tested a pair during a week of Arctic survival training at Eielson AFB outside of Fairbanks, and they did the job. The Sorels would have done just as well, and I kept mine for hunting trips and hikes. I still have them, up in the garage rafters.

I’m thinking of Sorels and bunny boots because I’m reading “Ice Ghosts: the Epic Hunt for the Lost Franklin Expedition,” which references the disdain the British of the mid-1800s felt toward the Inuit people of northern Canada, who could have taught the survivors a thing or two about dressing for the cold.

Back to the Crocs, though, which have been on my feet nearly every day since Christmas, ugly be damned. I’m a convert, a missionary of the Church of Croc. Do you have a minute, sir, to talk about footware?

That’s all I wanted to say this morning. I suppose I could offer some weighty thoughts on Trump’s pardons and commutations, but what can I say that isn’t being said, and more importantly, what can I do? Tell you what, though, elect me and by close of business on my first day in office I’ll have pardoned Reality Winner and Chelsea Manning, and commuted the sentences of every person still in jail for selling marijuana.

4 thoughts on “What a Croc”