What matters? Where you put the apostrophe. 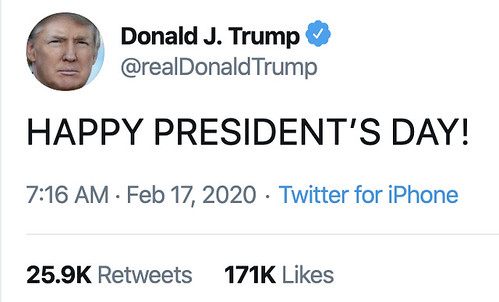 Someone clearly thinks today’s holiday is all about him, and so do many of his supporters. But like most of us I put the apostrophe at the end, making it a plural possessive, firm in the belief (at least until this morning) that Presidents’ Day is meant to honor George Washington and Abraham Lincoln.

Trump’s tweet kicked off a raging debate on social media about just where the apostrophe goes, so I decided to do some fact checking. Turns out, most unsatisfactorily, everyone’s right.

Looking up Presidents’ Day on Wikipedia, one is redirected to Washington’s Birthday, the name of the holiday Americans once celebrated on February 22nd, regardless of which day of the week it fell on. I used to think Presidents’ Day was a one-size-fits-all federal holiday. It started out that way, but today, although there’s a loose federal regulation about it, the details are left to the states. By “loose” I mean just that: Massachusetts still observes Washington’s Birthday on February 22nd, but has a separate Presidents Day (no apostrophe) on May 29th, specifically to honor presidents born in Massachusetts. New Mexico has two Presidents’ Days, one on the third Monday in February and another on the Friday after Thanksgiving. Indiana observes Washington’s Birthday on Christmas Eve and Lincoln’s Birthday the day after Thanksgiving.

Most states observe Presidents’ Day today, the third Monday of February, although some call it President’s Day while others call it Presidents Day (the federal government still officially calls it Washington’s Birthday, but since the early 1970s has observed it on this day, not the actual birth date). Some states say the holiday honors Washington and Lincoln; one, Alabama, Washington and Jefferson. Some states (these would be the ones Trump likes) say it honors all presidents, including the incumbent. Arizona, my state, probably has the most awkward holiday name of all: Lincoln/Washington/Presidents’ Day. Hey, at least I agree with Arizona on apostrophe placement!

Just as the presidency has been cheapened, so has the holiday, and I say let’s change the name back to Washington’s Birthday and observe it on the correct day, February the 22nd. But instead of making it a federal and state holiday and giving workers time off, make Election Day, the first Tuesday after the first Monday in November, a paid-time-off holiday instead, as a way of making it easier for citizens to vote. Then maybe we’ll get some incumbents worthy of the office, and we can think about making it Presidents’ Day again.

2 thoughts on “It Matters”