A Cold Reaction to the SOTU 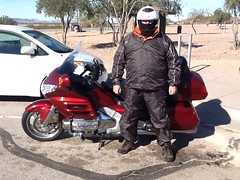 It was cold this morning. Not as cold as it was on my way to California in December 2012, when a riding buddy took this photo of me layered up in everything I had just to keep from freezing to death at 75 mph.

It was 26°F when I got on the Goldwing this morning; still 26°F half an hour later when I dropped it off at the Honda shop across town. Now that I think about it, it probably wasn’t any colder when that photo was taken. The difference was we’d been riding for hours in freezing conditions and were chilled all the way down to our bones. A short ride across town? Piece of cake, although one has to be wary of ice on overpasses and bridges. In fact, it didn’t feel freezing, but the bike’s temp readout confirmed it was, that and the fact the switches on the handlebars (turn signals and the like) didn’t start working until I’d been riding for ten minutes, one of my Wing’s cold-weather quirks.

For years now (15 at least), my friend Ed and I have done all the maintenance on this motorcycle. Ed has his own motorcycle workship and garage, complete with a hydraulic table lift, tire mounting stands, and all the tools. Not to mention the expertise to perform just about any job. But Ed just opened a new restaurant and is working 24/7 to get it off the ground. I didn’t want to ask him to make time for me, knowing how busy he is these days. I was going to buy a motorcycle lift so I could change my own oil and do other basic maintenance, but the minimal one I want is around $700, and that’ll pay for a lot of oil changes at the Honda shop. For the first time in a long time I’m paying someone else to work on my ride.

While I was at the Honda shop, waiting for Donna to meet me and take me home, I sat down on one of the new Goldwings, a major redesign they came out with in 2018, and I have to say it’s growing on me. The new Wings are a little more compact than mine, but boy are they slick. And they come with automatic transmissions now. No more clutch lever or toe shift. It’s tempting.

We didn’t watch Trump’s state of the union speech last night and after hearing about it I’m glad we didn’t. Of course everyone’s talking about it on Facebook and Twitter, so it’s not like we missed much. I popped off on Facebook about Trump awarding Rush Limbaugh the Presidential Medal of Freedom, saying the medal can’t mean very much if a president can just give it to anyone.

And now Rush Limbaugh. What I meant by my rude comment last night was that Trump has turned the nation’s highest civilian honor into a political spoil, a shiny bauble he can bestow on golfing buddies, prominent racists, and if he gets a second term probably pardoned war criminals too, mainly as a way to poke his perceived enemies in the eye.

I saw the clip of Trump turning his back to Nancy Pelosi’s outstretched hand as he took the podium last night, and of Nancy ripping the paper copy of Trump’s speech in half afterward. And I say Go Nancy!

I’ll just add that I was at my sister Sue’s bedside as she died of lung cancer in October 2017. She lived a little more than two weeks after being diagnosed with advanced lung cancer. I don’t expect Rush Limbaugh to linger long, although his riches may buy him a little more time. My point is that dying of lung cancer, struggling for breath at the end, is a grim way to go and that I had hoped Rush would experience a less squalid, more meaningful passing. One that involved an Ebenezer Scrooge-like epiphany where he would see the great harm he has done bringing racist hate out of the closet and back into the mainstream of American life and culture, feel overwhelming remorse, and spend whatever time he has left atoning for his sins.

7 thoughts on “A Cold Reaction to the SOTU”