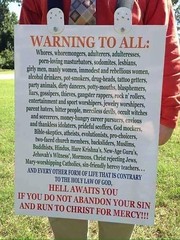 I swear, these street-corner scolds keep padding their lists. Gotta confess, though, I’d have to be ten feet tall to wear a signboard long enough to list all the things I disapprove of. And then there’d have to be two, sandwich board-style, so the list could continue down my back.

Just for starters, I’d add two additional categories: wielders of grocers’ apostrophes (see “New-Age Guru’s”) and exclamation point abusers (“… AND RUN TO CHRIST FOR MERCY!!!”). Mad respect for the castle nuts, though … I’d hire this guy to build my sandwich boards. Two thousand years from now an archeologist will unearth his placard from the rubble of a post-rapture Gomorrah, and it’ll look as good as new.

My first link today is to a speech by John le Carré, delivered January 30, 2020 at the Olof Palme Prize ceremony in Stockholm, reprinted in The Guardian. It’s fascinating, not only for its recounting of Olof Palme’s fearless humanitarian activism, but for its insights into the writing of le Carré himself, and for its assessment of the tragedy that is the UK’s decision to leave the European Union. I wonder what the great man thinks of happenings on our side of the pond.

Speaking of which, I couldn’t help but notice that MSNBC has moved on to the Iowa caucuses. It should come as no surprise that after breathless round-the-clock coverage of the impeachment trial, the minute the Senate voted against allowing witnesses and documents they wrote it off as a done deal, even though the final vote is still three days away.

I don’t disagree. I thought it was a done deal all along. The only thing that’s going to get Trump out of the White House is an overwhelming landslide for his opponent this November. A 3,000,000-vote popular win won’t cut it, as we learned in 2016. We’re going to need a 10,000,000-vote margin, and even then who’s to say the Electoral College won’t nullify our choice once again? Frankly, though, I fret less over the Electoral College than the reawakened strength of reactionary racist stupidity in this country. Even though I believe we outnumber the deplorables, I don’t think enough of us will turn out to vote for the Democratic candidate, whoever it turns out to be.

Donna’s been away this weekend. She drove to Phoenix with her friend Millie Friday morning. They went to a sewing and quilting expo, then to Millie’s son’s ranch, where they’ve been feeding the horses while the son’s away on business. Donna wasn’t one of those horsey girls growing up (I never liked those girls when I was a kid, and have always been glad Donna isn’t one of them), but she’s taken care of these horses before and says she likes doing it. As a fan of Crouton, Twitter’s most famous cow, I’d probably enjoy a couple of days at the ranch too. Donna says she’ll be home this morning so we can watch the Superbowl together. More like so she can watch … I’ll be in the kitchen, ensuring an uninterrupted supply of Buffalo wings.

Found this in the spam trap this morning:

Dude’s honest, but he and his ilk still go on the list. Oh, gosh, I almost forgot a particularly irritating type of sinner: 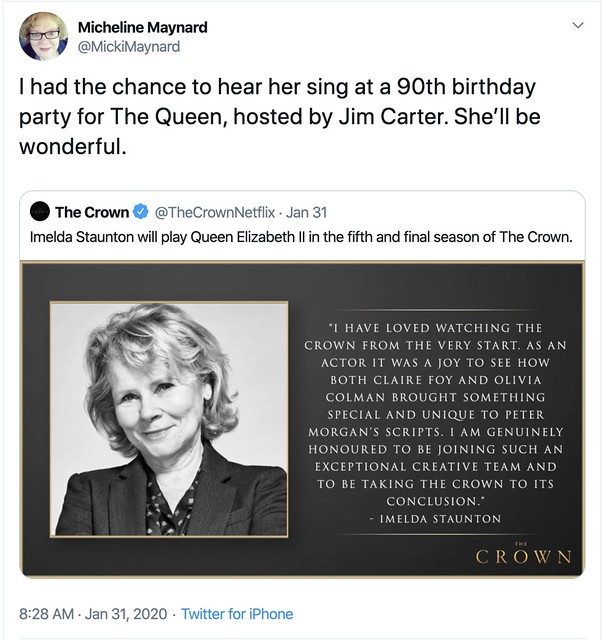 I haven’t decided whether to break out categories of Americans who so worship royalty they capitalize titles not accompanied by names, or English speakers of any nationality who capitalize titles not accompanied by names out of some misguided sense of respect, or combine them as one. Even worse: authors and journalists who capitalize “realtor” because the real estate industry took out a copyright on the word, including the capital R. Fuck them, they don’t get to make up their own rules.