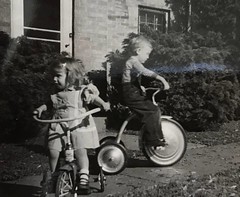 My sister Susan was born on the 4th of April, 1948, a year and a half after I came into the world. That’s us playing in the front yard of our grandparents’ home in Jackson, Missouri, some time in the early 1950s.

That old photo illustrates our relationship as children: although we lived together, sometimes with our parents, sometimes with our grandparents, our instinct was always to go in different directions. When forced to sit next to one another, we fought. Brother and sister.

Sue was 68 when she died last Friday. She wanted to see me and I came, arriving at her hospital in Belleville, Illinois, early Wednesday evening. Sue was awake and alert, refusing pain medication in order to stay that way. We had a good talk, or as good a talk as any two people can have when one of you is facing death, and I will be forever grateful I made it to her bedside in time for that talk.

Our next youngest sister, Mary, couldn’t fly out from her home in Montana until Thursday; by then Sue was on a morphine drip but still holding on, hearing and responding to Mary, occasionally smiling, squeezing her hand. Our two youngest sisters, Cece and Charlie, live nearby and had visited Sue two or three times in the days before Mary and I got there. Sue’s daughters and all her grandchildren live in the St. Louis and Belleville area and were in and out of her hospital room at all hours. We were there for her. She knew we were there and went peacefully … if one can consider struggling for breath a peaceful way to go (thankfully they kept increasing the morphine dosage as the end approached).

Over the years, Sue and I became closer. As grownups and parents our lives were similar; we had a lot in common and came to appreciate it. Of course we were always geographically separated, but we saw each other at family events, more often as the years passed. Our parents’ deaths brought us even closer together.

Sue separated from her husband a little over six years ago and lived on her own in Belleville, as happy as I’ve ever known her. We all assumed she’d have many more good years. A couple of weeks ago she went to her doctor because, in her words, she was feeling “spectacularly bad.” She thought she had pneumonia. She had lung cancer, quite advanced, and only days to live.

I used to think Sue had a rough life. After spending a couple of days at her bedside and catching up with her daughters, her grandchildren, and my other sisters, I came to the realization that she had a good life. She was more like our mother than I knew, fearless when it came to bringing home snakes and insects, a patient guide and teacher to her daughters, a loving grandmother. And a good sister and friend.

Sue, I will forever miss you. Love and godspeed to you, dear sister.

5 thoughts on “My Sister Sue”