My niece Rebecca takes National Novel Writing Month seriously. I think the world of her, so I’m taking it seriously too. She sent a Google Doc link to her work in progress. I reciprocated with a link to mine, a chapter of a planned memoir. I was happy with it when I finished it a couple of months ago, but am less so now. The voice is wrong; it isn’t me. So … we both have work to do, and this is the month to do it.

Sue’s funeral was yesterday. The minister read something I wrote at the service. I didn’t expect that, but it’s good I was there in a sense. Rest in peace, dear sister.

My youngest sister Charlie posted this on Facebook today:

Over the past two weeks, I’ve grieved the loss of a sibling, reconnected with dear family members, celebrated the birth of new granddaughter, and feared the loss of a daughter. In short, I’ve experienced great sorrow, tremendous joy, and every other emotion in between. I don’t know how I could have withstood it all without my family, my co-workers, my friends, and my faith. Thank you, all.

By way of explanation, Charlie’s youngest daughter Laura delivered by emergency C-section and had some serious, scary bleeding. This happened a day or two after Sue died. Laura’s still in hospital, recovering, and all seems well now. Charlie is strong and good. We were raised right, or at least my sisters were. We were five; now we’re four. 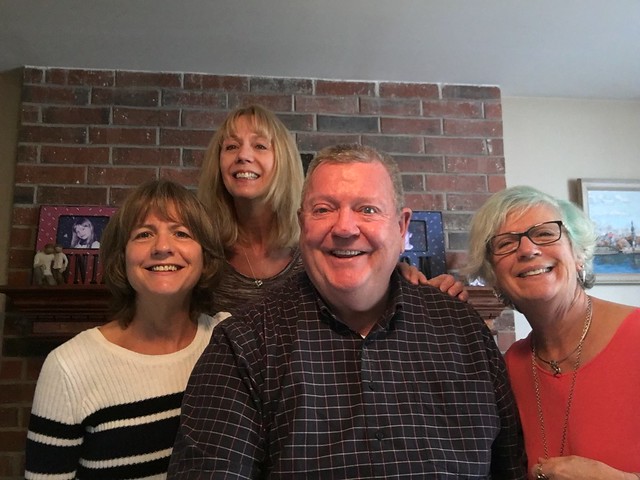 Mary, in red, is the next youngest after Sue. Cecelia is next; she’s on my other shoulder. That’s Charlie, the youngest, behind us. I don’t need to say I’m the oldest, do I? I think it’s obvious!

A question about airline travel: can it get any worse? I hope to manage my golden years in such a way as to avoid further air travel. It would perhaps be different if I could afford to fly first class, but I don’t know: big jets with proper first and business class cabins don’t operate out of Tucson, only small ones, and when I squeezed through the front sections of the 737s and 717s I flew on last week, the seats didn’t look that great and the aisle was only an inch or two wider than the one in back. Honestly, the gentry didn’t look any happier than the peasants. As for the peasants, of which I am one, oh the humanity.

There wasn’t a spare inch of wasted space in steerage, not even for the cabin crew, for whom I felt especially sorry. The cabins were cramped, dismal, dark, and hellish. A trip to the lavatory meant hip-on-shoulder contact with aisle seat occupants. Fatties like me oozed into the aisles, making passage even more difficult.

I couldn’t bend my right knee for almost 24 hours after arriving in St Louis. Coming home I paid extra for exit row seats, and if I hadn’t checked in exactly 24 hours before my flights, the earliest they allow you to, they’d all have been taken. Add anxiety over tight connections, missed flights, and lost luggage (or overhead bin space if you rely on carry-on … but hey, you can also pay extra to board earlier), and it’s a thoroughly miserable experience. You can’t say never because you never know, but I’m determined not to fly again.

I celebrated my birthday on Hallowe’en. Mr. B, our new dachshund, was my early birthday present, just as Shatzi was in October 2005. Lots of cards and calls, lots of greetings on Facebook. Donna made a great dinner. We had a record number of trick-or-treaters, to the doggies’ delight. I topped off the day with two episodes of Stranger Things 2. Life is good!

I haven’t invested any hope in US Special Counsel Mueller’s investigation. I expected him to slow-roll it, based on the fact that he comes from the same FBI leadership cabal as that two-faced James Comey, who despite anything he’s said or testified to since, deliberately torpedoed Hillary Clinton just a few days before the election.

I may be wrong. Mueller has now indicted some key Trump campaign associates, and perhaps more indictments are coming. I’ll be surprised if Mueller goes after Trump himself, but what if he does? What happens then?

Say Mueller reveals hard proof that the Trump campaign knowingly colluded with Russia, strategically using leaked emails to hurt Clinton’s campaign. Say the president—backed by the Wall Street Journal editorial page, Fox News, Breitbart, most of the US Cabinet, half the panelists on CNN, most of the radio talk show hosts in the country, and an enormous network of Russian-paid hackers and volunteer shitposters working through social media—rejects the evidence.

They might say Mueller is compromised. It’s a Hillary/”deep state” plot. There’s nothing wrong with colluding with Russia in this particular way. Dems did it first. All of the above. Whatever.

Say the entire right-wing media machine kicks to life and dismisses the whole thing as a scam—and conservatives believe them. The conservative base remains committed to Trump, politicians remain scared to cross the base, and US politics remains stuck in partisan paralysis, unable to act on what Mueller discovers.

In short, what if Mueller proves the case and it’s not enough? What if there is no longer any evidentiary standard that could overcome the influence of right-wing media?

That’s from an article on Vox.com, well worth the read. Two separate worlds, two separate truths. It’s been that way for a while now, and it’s getting worse, and I don’t know what anyone can do about it.