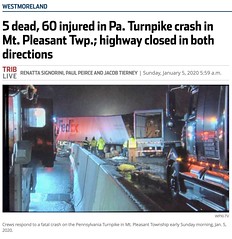 Anyone who’s ever had a flight cancelled for weather knows what a huge inconvenience it is, but for safety reasons that have been apparent since the Wright Brothers, we also know it’s not safe to fly when the pilot can’t see down the runway for takeoff or see the ground when trying to land. Or when visibility is good but the runway’s coated in ice and anyone trying to land on it is going to slide off the end. Or any combination of the above. We bitch about missed connections and ruined vacations, but we don’t want to die in a crash either.

Isn’t it about time we impose visibility and braking action limits on drivers? Or at a minimum, on drivers of large commercial vehicles? There’s a stretch of Interstate 10 between Tucson and Phoenix I dread having to travel on, primarily because of the number of huge, heavy semi-trailer trucks hurtling along in all lanes. And that’s when the visibility is good! When dust storms kick up and no one can see more than a car-length ahead, it turns deadly, and the big trucks make it more so. They never stop and they never slow down, and you’re squeezed in between them—front to back and side to side—in your little metal and plastic crumple death pod.

Because commercial drivers will go broke if they stop to wait it out. Because they’ll go broke if they don’t show up at the destination warehouse before closing and have to sit there overnight when they could be driving the next leg instead and making money. Because the way commercial drivers are paid forces them to keep going in insanely dangerous conditions. Because they have to cheat on mandatory rest requirements to avoid finishing trips in the red, owing more for fuel and upkeep than they made, so they’re falling asleep at the wheel in good weather and bad.

I’m convinced the trucking industry and the media collude to minimize news of traffic fatalities where commercial truck and bus drivers are to blame. Sure, we read about some of these accidents, at least the egregious ones that cause major disruptions and where there are too many witnesses to ignore, but even then, news reports shy away from stating the obvious: heavy trucks and buses were driving way too fast, and many more people were maimed or killed then if giant 40-ton vehicles hadn’t come plowing into them from behind. Moreover, I think the feds are in on it too. The highway division of the NTSB knows the scope of the problem, but they don’t want to panic the driving public.

What if there were visibility and braking action limits, and federally-licensed CDL drivers were prohibited from driving when the highway patrol determines conditions on any highway or road have gone below those limits? Sure, you’d need some infrastructure to make it work … some way states and local authorities could shut down sections of roads and highways to commercial traffic, warning signals and the like, some way for drivers of commercial vehicles to be notified, a change in the way drivers are compensated so they don’t suffer financially … but, as with aviation, it could be done. Just imagine.

Then remember that there’s a trucking lobby with a long (and generally successful) history of opposing any and all safety restrictions, and relentless commercial pressure to squeeze more mileage out of drivers for less pay. But hey, once the trucking industry eliminates drivers altogether, maybe the radar sensors on self-driving trucks will register slowing and stopped traffic ahead and apply the brakes in time. Maybe that’ll be better than the current status quo. Well, we’ll see.

When Iranian students took American diplomats and embassy staff hostage in 1979 and the Ayatollah did nothing to stop them, I hoped President Carter would make a strong threat and back it up if the Iranians didn’t release the hostages. Something on the order of hey, Ayatollah, there’ll be a USAF C-5 Galaxy landing at Tehran International at 2300 hours, and if the hostages aren’t delivered and on board by 2330, the carpet-bombing of the holy city of Qom will commence at 2345, and how do you like them apples? I believe to this day that’s what Carter should have done.

Obviously, though, Carter’s intelligence, military, and diplomatic advisers didn’t think so, and no threat was issued. Despite our disastrous rescue attempt in 1980, the Iranians got clean away with holding our people hostage for 444 days, and some of those revolutionary students are members of Iran’s ruling class today.

What’s happening now is all about the hostage crisis. We never kicked Iran’s ass for its actions then, and the hatred and resentment has been simmering on the back burner ever since. It’s unfinished business, especially in Republican and conservative circles. Trump’s tweet from yesterday, in which he says “we have targeted 52 Iranian sites (representing the 52 American hostages taken by Iran many years ago)” makes his motivations perfectly clear. And, with Trump, it’s not just about the hostages. It’s about repudiating President Carter for wimping out in 1979, and about repudiating President Obama for negotiating a treaty with Iran in 2015 (a treaty Trump unilaterally withdrew from in 2018).

Remembering how I felt in 1979 helps me understand what’s going on today. But those feelings have changed considerably over the years. I don’t want revenge. I think we should withdraw military forces from the entire Mideast region and conduct our business there through commercial contracts and diplomacy. We can’t undo what happened in 1979. We can move on. But I’m not driving this heavy truck that’s about to plow into reality, and all I can do is vote the War Party out of office in November. Perhaps you’ll join me? That would be nice.

Donna and I have had time displacement issues the past couple of weeks, what with Christmas and New Year’s falling on Wednesdays. Today, Sunday, is the first day since December 25th I’ve woken up knowing what day it is … and having the calendar confirm it. The outside decorations are down, thanks to me (who also put them up); I’m waiting now for Donna and Polly to box up the inside stuff so I can stow everything back on the shelves in the garage and make room to work on the motorcycle … it needs an oil change to start 2020 off right.

You might remember me talking about buying a motorcycle lift to help me with tasks like oil changes, but now, after consulting with my friend and maintenance guru Ed, I’ve talked myself out of it. I’ll just have to figure out a way to get up again after I lay down on the garage floor to do what needs to be done.

My sisters and cousins are starting to talk about another Woodford family reunion, probably in the fall of 2021, this one in NE Nebraska where my father’s family is from and some of the cousins still reside. Donna and I are thinking about it. It’s close to 1,500 miles each way, but maybe it’ll be time for a new truck by then … a big heavy bastard that’ll offer at least some protection from hurtling out-of-control semis on icy Nebraska roads.