I know I told this story before, but it’s worth retelling. When I drove handicapped patients for the Tucson VA Hospital, I had one skinny old guy who took three trips a week to University Medical Center for radiation treatment. He was always pretty quiet, but one day, making small talk while strapping his wheelchair down in the back of the van, I asked if the black spots on his arms were the result of his treatments. No, he said, they were from the attack. I thought about that for a minute, then asked him which attack. Pearl Harbor, he said. Well, I couldn’t just let that sit, could I?

He told me he was a 17-year-old Marine medic that day. His unit had set up a tent hospital in the sugarcane fields on the hillside above Pearl Harbor in Aiea. Donna and I would live on that same hill 50 years later, and I can still picture the view we had of Pearl Harbor, Hickam Field, and Ford Island. His view must have been even better, because the hillside was emptier in those days. He and the other men in his unit watched the Japanese planes fly over, as confused as to what was going on as anyone else that morning, but when the bombs began going off they realized what was happening and jumped in their trucks to go down and help. The black spots were from shrapnel that tore through his arms while he was treating injured airmen and sailors during the second wave of the Japanese attack. This photo was taken on the same Aiea hillside: 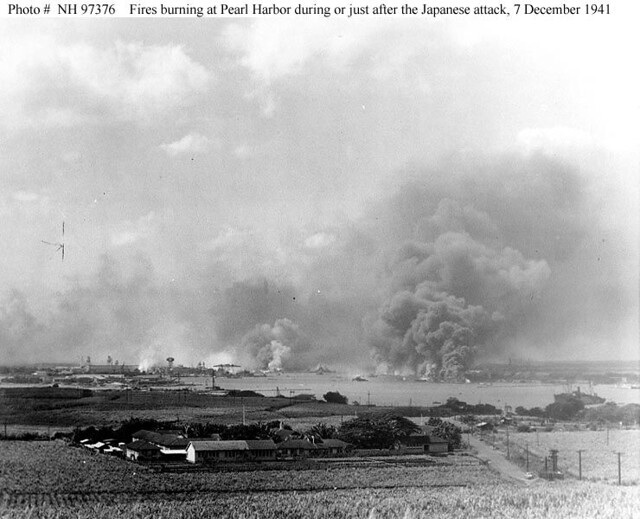 He was a widower who lived alone and had recently lost his companion of many years, a dachshund named Gretchen. My own dachshund, Schatzi, was still a puppy, and we bonded over our love of dogs. He’d been undergoing inpatient treatment at the VA for some time. They had him housed in a single room in the hospice wing, not because he was dying but out of deference to his status as a Pearl Harbor survivor. I didn’t tell him that when I lived in Honolulu, I’d paid several visits to the Punchbowl on the back side of Diamond Head, the National Memorial Cemetery of the Pacific, and knew where most of the December 7, 1941 headstones were located. In time he finished his radiation treatments and I no longer saw him on a regular basis. I heard he died about a year later.

I still think about him, along with some of the other remarkable vets I worked with at the hospital. One of my regulars was a survivor of the Bataan Death March, who had later become an Air Force pilot, flying B-47 jet bombers out of Davis-Monthan AFB in the 1950s. Another had flown B-24 Liberator bombers out of bases in England, been shot down over Germany, finished WWII as a POW, and was later the wing commander at DMAFB, also flying B-47s. Another had enlisted in the Navy near the end of WWII and wound up closing out American military installations on some of the Pacific islands we used during the final push against Japan, who regaled me with stories of destroying military equipment that had been left behind, liberating whiskey and steaks from abandoned warehouses and reefers, and meeting actual cargo cult islanders. Yet another had been part of the Manhattan Project and filled me in on the development of the atomic bomb, but since he insisted the bomb had been built in Ames, Iowa, his home town, I came to doubt his version of events.

After I walked Mister B this morning I did my regular Saturday morning chores, which include refilling the bird feeders. Donna wondered if the birds were happy, and I had to think about that for a minute. I know for a fact the hummingbirds watch when I take their feeders inside to wash and refill them, and wait impatiently until I put them back outside. I know because they buzz me when I come back out. As for the larger birds, the house sparrows and goldfinches and whatnot, they stay out of sight but no doubt watch from a distance. Do they make the connection between the big human messing with the feeders and finding them filled with fresh birdseed? I don’t know. This morning, after filling the feeders, I went back out on some other chore, and there were Polly’s two cats sitting under the bird feeder by my office window. There’s no denying those two have made the connection.

Animals are plenty smart. Even the ones with tiny brains are as smart as they need to be. If they weren’t, they wouldn’t survive. Sure, the birds know. They’d have to, wouldn’t they? 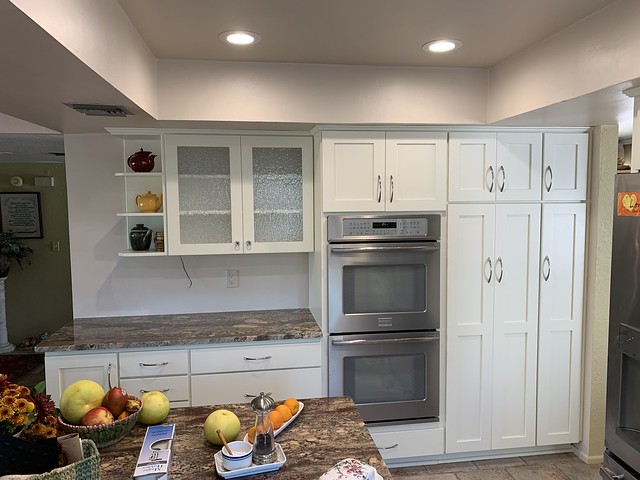 The cabinet is the one at the upper left. In Donna’s original plan, the section of wall behind the cabinet wouldn’t have been there, but it turned out it was holding the ceiling up and had to stay. The rest of the new cabinets had already been ordered and this one was a last-minute addition, so we had to wait for it to be built and shipped.

Along with the cabinet, which we’ll use for our cookbook collection, the contractor put up the trim around the cabinets and cupboards on that side of the kitchen, and installed the glass doors and handles. The wire hanging down is for a light strip that goes on the bottom. That’ll be installed next week, along with tiling on the walls. The project will then be complete, and judging by the war stories we’ve heard from friends who’ve also had kitchens remodeled, we’re lucky our project came in mostly on time and within budget.

I swear, it’s all Donna: she’s been planning and dreaming about this kitchen for 20+ years. She learned from the experiences of our friends and had a line on the best and most reliable contractors in town. She worked out every detail long before we even interviewed the first one. And because she’d done her homework (and then some), it came together perfectly. I stayed out of her way and tried not to interfere. In fact I almost feel guilty over loving the new kitchen as much as she does, because it was her project all the way. Even if we never get a penny of it back when we eventually sell the house, it’s money well spent.

I don’t have much today in the way of traditional bloggage (linking to and commenting on stories in the news), but here are a couple of things that caught my eye.