Everything’s coming up off-white: the new paint in the kitchen and family room, the recessed lighting, and the new cabinets and cupboards they started installing yesterday while I was working at the museum. This is what I came home to: 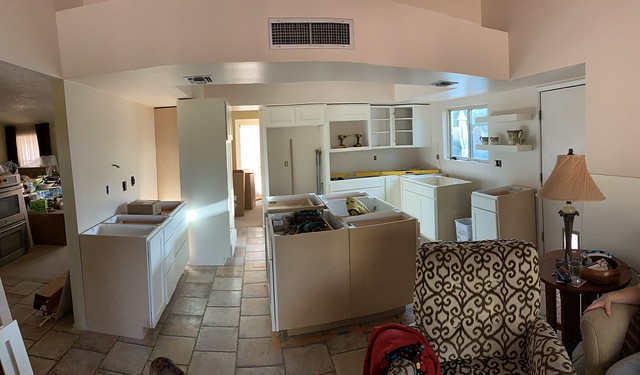 Looking good, I think. I’ve only seen small samples Donna brought home to show me, so I can’t yet visualize the finished kitchen with countertops and splashbacks, nor handles and pulls, all of which Donna has selected and which will be installed next week, but I can’t wait to see it all together. Donna’s had 20+ years to plan her new kitchen, and she put a lot of work into it. I think her detailed planning is the main reason the work is on schedule. But knock on wood, just in case.

By the way, it’s starting to look as if the contractor won’t have to chip out and replace the existing floor tiles … but we have leftover tiles from the original reflooring job years ago, if it turns out he needs them.

I spent some time with my friend and motorcycle maintenance guru Ed Sunday morning, replacing footpegs on my bike and fixing a broken latch in the tour pack. I love using his motorcycle table lift. It gets harder and harder to get down on the garage floor to change the oil or pump air in the tires; with a lift I can bring the work up to waist level. I’ve been planning to get one for my own garage but am having second thoughts. Do I really need something so extravagant? There’s a smaller type of jack that’ll do the same job at a fraction of the cost, and maybe I’ll get one of those instead.

It’s windy this morning and the radio says it’ll stay that way all day. When Mister B and I went for our morning walk, we headed up the cul-de-sac with the wind at our back, pushing hard. Mister B kept stopping to stare back the way we came, and it dawned on me, halfway up the street, that he was looking for whatever was pushing against him from behind. He was looking for the wind.

I was going to write a Veterans Day post but settled for a couple of short entries on Facebook and Instagram, along with some photos of combat veteran aircraft from the air museum. Writing about my own service seems, I don’t know, self-serving? Like I’m asking for a pat on the back? For doing something I loved doing?

My family tree is full of men (and no doubt some women) who served, from the Revolutionary War right up to 1997, the year I retired. My father mapped out the family tree and I remember him telling me about ancestors serving in various wars and campaigns. What I can’t remember is whether he ever told me which side of the Revolutionary War early American Woodfords fought on. There were Woodfords on both sides of the Civil War: my branch of the family, the Iowa Woodfords, was Union; the Kentucky branch, the ones with the expensive bourbon, were Rebs.

In living memory, both my grandfathers fought in the Great War: Estes Caldwell on my mother’s side in the Navy (where Caldwells continue to serve); Fay Woodford on my father’s side in the Army. Since Fay had been a Burlington man before he enlisted, the American Expeditionary Force kept him in France for a year or two after the Armistice to help get the railway system operating again. My father was a sailor during WWII and was aboard the USS Bolster during the Battle of Okinawa. He got out after the war, went to college on the GI Bill, and then became a career Air Force officer. I grew up as a military brat, and after a short career as a professional student and hippie followed in his footsteps. I’m the last Woodford in the chain, at least for now, but who knows what path future Woodfords might follow?