When I stress, it’s usually over trivial problems. Something’s not working, but there’s gotta be an easy fix … except I don’t know what it is and will have to figure it out on my own. Here’s what I was sweating yesterday: 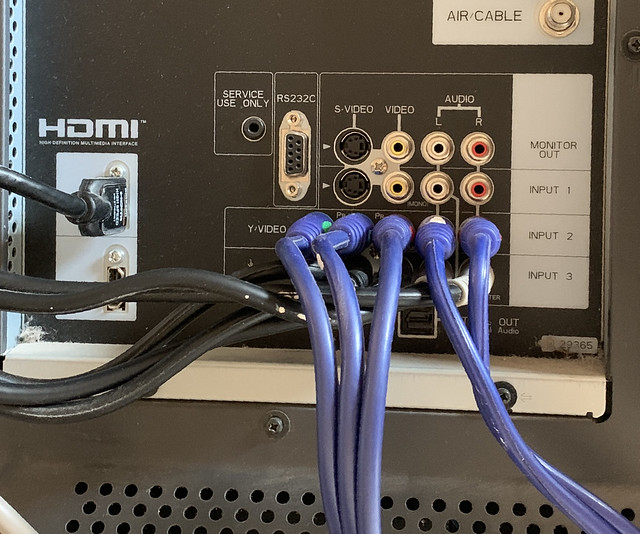 Thats right, the connections for a wall-mounted big screen TV. A painter came to do our kitchen after the drywall work was done, and we paid him extra to do our family room, which adjoins the kitchen. That was yesterday. We got up early in the morning to get the room ready for the painter. We moved the furniture into another room and took down the venetian blinds and everything mounted on the wall. No biggie. The TV was a different story.

When we bought it, several years ago, we paid Geek Squad to install it. They made holes in the wall to hide the cables and power cord. One end of the cable and cord bundle connects to the back of the TV through an opening halfway up the wall, hidden behind the TV when it’s mounted. The other end emerges from an opening at the bottom of the wall, hidden by a cabinet under the TV. It’s quite a bundle, and along with cables and cords for stuff we’ve added over the years … a sound bar, Roku box, and Amazon Firestick … you’re talking serious spaghetti.

We were smart enough to take photos of the cables hooked up to the DVR and DVD before we disconnected them, but I didn’t think to take one of how the cables were connected to the back of the TV when we took it off the wall. It was only when we went to hook them up again that I noticed there were two rows of connectors on the back of the TV, each identically color-coded for red, white, green, yellow, and blue cables. But which set of cables went to which row? Blue on top, black on the bottom … or vice-versa?

No sweat, you say, if you get it wrong just switch them. Yeah, except it’s a three-person operation to take the TV off the wall and put it back again. One on each end to do the lifting (Polly and me), and a shorter person (Donna) to squeeze between the wall and the TV and insert the cables, which will only extend a foot or so from the opening in the wall.

Well, guess what? I got it right on the first try! No more jokes about finding a handy second husband after I die, Donna! I rock!

The family room is together again, freshly painted, and never mind we’re going to have to shove the refrigerator and all the furniture up against the windows and cover the lot with plastic sheets when the kitchen cabinet installers show up next week, we’re enjoying a short spell of family room normalcy, and boy are the dogs happy their couch is back where it belongs. Last night I too slept well.

Here are two views of the family room, temporarily almost back to normal, and the kitchen, still with a way to go before it’s done. But hey, all the same color!

Just one more. This is the center part of the kitchen ceiling, raised about a foot from where it was before, with recessed lighting and exhaust fan installed. The island and cooktop will be underneath this area. 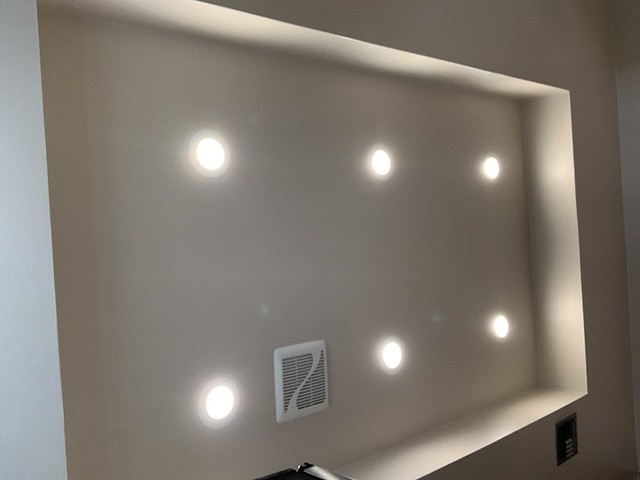 Two and a half weeks to go until Thanksgiving, and company. Everything’s on schedule, but wish us luck just in case, okay?

Some people say the anonymous author of the just-published “A Warning,” a tell-all allegedly written by a top Trump administration official, is Kellyanne Conway. If the anonymous author’s claims are true, he or she would have to be someone highly placed in the West Wing, close enough to Trump to be in on cabinet-level meetings and Oval Office conversations. Kellyanne seems like just such a person. I recall her being opposed to Trump during the campaign for the Republican nomination, then doing a 180 afterward. That would indicate a willingness to kowtow to a hated master while at the same time spilling the beans behind his back. But who knows? Could be Lindsey Graham. Could be someone recently fired, like John Kelley. Could be an outsider with insider access, like Sean Hannity. No, strike that. Hannity’s too stupid to hold conflicting thoughts … he’s all in.

I’m sure we’ll find out who it is once this kidney stone of an unelected president has passed. Which’ll be soon, I hope.