Neutrality in the Commons 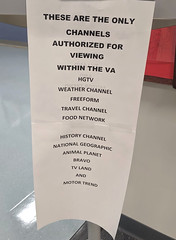 A friend sent this photo of a sign in the lobby of a VA hospital. He thought I’d be interested. And I am.

I’ve written a few posts about what should be allowed to screen on common area televisions on military bases and other government facilities. Ditto the television monitors in my local Anytime Fitness gym, so my concern extends to commercial common areas as well.

The idea of the commons is still part of our thinking today. The commons was the section of public land inhabitants of villages and towns shared and used for agriculture and grazing. By the mid-1800s, they’d been privatized and enclosed, but the concept lives on in our ideas about shared resources like air, water, and a habitable earth. It lives on too in shared public spaces, where people of all political and religious persuasions intermingle.

In the 1980s DoD policy forbid airing partisan commentary on common area TVs and radios. CNN, which in those days was a pure news outlet offering around the clock international and domestic reporting, was authorized, and it ran in the background on TV monitors at military command headquarters and the Pentagon. I’m not making an assertion but stating a fact: I was a joint staff officer at the time, shuttling between US Special Operations Command in Tampa and the Pentagon in Arlington. I remember my colleagues and I crowding into the lobby of USSOCOM at MacDill to watch breaking CNN news of the downing of Iran Air Flight 655 by the USS Vincennes, the first reports from San Francisco after the Loma Prieta earthquake, and other major events of the day.

At the time, DoD’s policy was a viable answer to the problem of who controls what plays on common area TVs and radios. But times change, and so did CNN: no one today can argue with a straight face that anything it airs is neutral, let alone reportage: turn it on at virtually any hour of the day, and they’ll be running shouty political talk shows, true crime documentaries, or celebrity gossip.

Are there any neutral news networks today? It’s instructive to look at the VA’s list of authorized channels in that photo. Did you notice there’s not a single news channel? I’m more than a little surprised the VA’s list doesn’t include PBS or C-Span, but that’s probably because they’re scared of the kind of conservative veterans who’ll loudly complain that those sources show liberal bias because they cover news and events they don’t want to hear about, like climate change. The same thing happens with Facebook, which tries to keep its MAGA hat-wearing members happy by ignoring news that’s likely to set them off.

I used to spend more time on Davis-Monthan AFB in Tucson than I do today, waiting in line at the BX pharmacy or the pass & ID office. The common area TVs were invariably set to Fox News, which was and is so relentlessly partisan it makes CNN look like the Saint Neutral McNeutralface in comparison. I wrote a couple of protest letters and sent them to the base commander, for whatever good that did.

I mentioned radio. You don’t often hear radios playing in the background in common areas today … it’s almost always TV … but American troops posted overseas listen to Armed Forces Radio Network in common areas like chow halls and exchanges. Last time I checked, AFRN was still broadcasting Rush Limbaugh. I wrote letters about that, too, and even got a Congressional response from Gabby Giffords. To no avail, but hey, she took up my cause when my senator, John McCain, couldn’t be bothered even to send a form letter reply.

Commercial common areas are still common areas: to wit, my corner Anytime Fitness. Unlike when I was forced to wait in military common areas, where TV and radio remotes are kept behind the counter, my fellow gym patrons get to decide what’s on TV. So the question on everyone’s mind is who’s the asshole who set all the monitors to Fox? Is he still here? Is he going to start a fight if I change the channel on the monitor above the equipment I’m using? Most of us are too timid to act, so at any given time one gym patron is happy while the others lift and pedal and stretch in frustration. My own response has always been to use the remote to mute the sound on monitors near me. So far no one has turned them back up or offered to fight me.

When I drove handicapped patients for the VA in Tucson, I kept the radio in the van set to NPR. This was a year or two after I’d filed complaints about partisan political “news” on military common area TVs and radios. There I was, finally in charge of a common area radio, and don’t think I didn’t see the irony in that. Occasionally one of my passengers would ask me to put on a conservative talk radio station. I’d say no, that NPR was the least offensive and partisan option. They’d say “but NPR is hella liberal” and I’d say “you must not have listened to it lately, but if you don’t want to hear it, I’ll be happy to turn it off.”

See, everything’s been poisoned and politicized by the likes of Rush Limbaugh, Sean Hannity, and Chris Matthews, and even arguably neutral news sources like NPR, PBS, and C-Span are perceived as partisan. What’s left for those of us forced to watch and listen in the Commons? The Food Network? HGTV? The Weather Channel? Gag me with a spoon!

The lowest common denominator. It always wins, doesn’t it?

One thought on “Neutrality in the Commons”