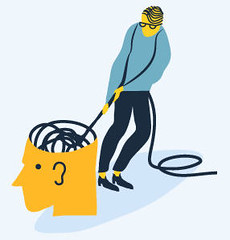 I’ve been reading about the content moderators who review objectionable content posted to social media, and the psychological toll constant exposure to “the Internet’s panoply of jerks, racists, creeps, criminals, and bullies” takes on them. And wow, the stuff they’re subjected to … I cling to this idea that there’s hope for humanity, but if I had to look at the stuff content moderators deal with every day I’d resign from the human race and live on a mountaintop on the planet Ahch-To, a couple of peaks over from Luke Skywalker.

Jerks, racists, creeps, criminals, bullies, and worse have always been around, but I seem to recall a time, not that long ago, when they were universally condemned* and knew it, and tended to stay in the closet. Boy, those days are gone.

The dynamic has changed. Used to be, if a prominent person said something outright jerky and racist, the media and the public would react with across-the-board disgust and you’d hear no more from that particular racist jerk. Now we have a racist jerk in the White House and the deplorables no longer need to hide it. When Trump tells congresswomen of color to go back to where they came from the media waffles by calling his remarks “racially tinged” instead of “racist,” and the 30% of the population that used to keep their racism somewhat in check are unleashed, chanting “send her back, send her back, send her back!”

How do we put that genie back in the lamp, I ask you? Wish I had an answer. All I can do is take action on a personal level. Two days ago, a writer I admire and follow, Hugh Howey, posted this on Twitter:

One of the most difficult but rewarding things I’ve ever done is cut all the bigots in my family out of my life. There was no helping them. Now my time is spent with decent, loving people. And my joy in life is through the roof.

The people hurting you and others don’t deserve you.

I felt the need to respond directly to Hugh Howey. Here’s what I said:

When friends & acquaintances reveal racism or other deplorable traits, I have no problem cutting them out of my life. Family is a little harder. I do what probably most of us do: avoid discussions on race/politics/morality, limit interactions to the do-what-has-to-be-done level.

*I know, condemnation was never universal. The white racists who screamed at the first black children to integrate public schools in the 1950s had prominent support from southern senators, congressmen, and governors. And those supporters, men like Alabama Governor George Wallace, were admired by some in the media and a large segment of the public. But the overwhelming trend in the United States was by then toward equality and integration, just as a few years later it was toward ending the war in Vietnam, and condemnation, while not universal, was more widespread and forceful than it is today. Decent people prevailed, and the George Wallaces and Strom Thurmonds either withdrew or embraced change.