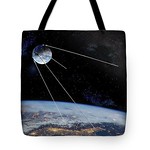 People old enough to have watched the Moon landing on live TV have been sharing details of where they were and who they watched it with. My own memories are hazy. Of course I remember watching Neil Armstrong step from the LEM onto the surface of the Moon and hearing him say, through static and scratches, “That’s one small step for man, one giant leap for mankind.” I mean, who doesn’t? But where was I? Who shared the experience with me?

Based on where we were and what we were doing in our lives at 8:17 PM GMT (1:17 PM California time) on Sunday, July 20, 1969, Donna and I must have watched the Moon landing together in student housing at Sacramento State. Our four-year-old son Gregory would have been in the room with us, not yet old enough to realize he was seeing something momentous.

I have an older but sharper memory of Grandfather Estes dragging me and my sister Sue outside one night to see something that had never seen before. It was October 1957, and the Russians had just launched Sputnik. I remember how excited Estes was, and how with much effort he was able to talk our eyes onto the tiny moving star arcing across the heavens, and how Sue and I … and indeed, people all over the world … marveled at the sight.

Even with Sputnik, there’s a little haziness. I always used to place us, in memory, in Estes’ back yard in Jackson, Missouri. Actually, though, in October 1957 we lived in Germany, where my father was stationed at Ramstein Air Base. I realize now that Estes and Louise, our grandmother, were in Germany visiting us, and now remember that their visit was almost as big a deal as Sputnik, because they’d come over on a once-in-a-lifetime crossing aboard the SS United States.

Back to Apollo, and another memory: several months after Armstrong and Aldrin walked on the Moon, Donna and I visited Estes and Louise in Missouri. Estes was an enthusiastic photographer and always had stacks of 35mm slides to show when grandkids and great-grandkids came calling. This time he put on a slide carousel of the lunar landing: photos he’d taken off the TV screen in his living room as it happened. Estes, I’m happy to say, never lost that part of himself, the excited kid amazed by technology, feats of exploration, and the world around him, and I wish he were still around so I could ask him where he was and what he was doing when Lindbergh landed in Paris. I’m so happy he lived long enough to come to my graduation from USAF pilot training, which to him (and me too, if I’m honest) was right up there with sailing on the SS United States, or watching Armstrong and Aldrin walk on the Moon.

Through my mother, I inherited Estes’s enthusiasm. Just one example: I still scan the night sky for satellites. Sometimes local news will give us a heads up that the International Space Station will be passing over southern Arizona. One night about two years ago Donna and I turned off the porch lights and stood in our driveway, looking to the southwest where Channel 4 News had told us the ISS would first appear, and by golly there it was, as bright as Venus, seemingly so close even a cheap pair of binoculars might have revealed its shape.

As the ISS passed into the darker sky to the east, I made out a small dot of light trailing it, almost as if it were flying in formation. From my point of view the distance between the two points of light was the width of my hand, which in orbit probably amounted to hundreds of miles. I pointed the smaller object out to Donna, who saw it too. The only thing it could have been was a resupply or Soyuz capsule, either joining on or leaving the ISS. After both had passed out of sight I beat feet to the computer to look up what was in orbit at the moment, and it turned out what we’d seen was a SpaceX Dragon resupply capsule catching up with the ISS (it was scheduled to dock sometime early the next morning). TV news hadn’t mentioned that there’d be anything trailing the ISS; it was just a happy bit of luck I even noticed it. Donna and I will never forget the sight. 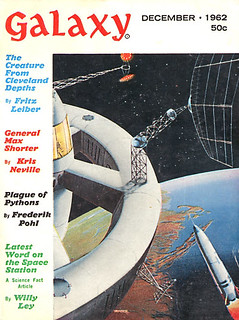 It’s no secret I read and watch a lot of science fiction, and that the SF stories I love most are set in the near future and center on the exploration and colonization of our own solar system. I recently read a couple of SF novels in that vein by Mary Robinette Kowal, so when I saw her recent thread on Twitter, ostensibly about peeing in space but by extension about how difficult it is to deal with human waste on long missions in confined spaces and zero gravity … missions to Mars, for example … it awakened thoughts I’ve long harbored.

Which thoughts are, in essence, that we fucked up when we didn’t follow the vision of early space thinkers like von Braun and Willy Ley, and build space stations like the one on the cover of this early 1960s magazine. They could be orbiting shipyards where we could construct and launch vessels on manned lunar and planetary missions, saving tons of energy that using current methods we waste launching from Earth, fighting gravity and the resistance of the atmosphere.

More importantly, such space stations … long-term human habitations in orbit … would rotate to provide Earth-like gravity inside. The problem of human waste is hugely exacerbated by lack of gravity, and cleaning up after ourselves would be much simpler if the mess we make just by being alive could be pulled downward by gravity.

Since the size of space ship would be less of a limitation if built in orbit, we could construct them with rotating sections to provide gravity as well, similar the one in Discovery One, Stanley Kubrik’s Jupiter ship in “2001: a Space Odyssey.” Imagine what the inside of an Apollo command module looked and smelled like after some of the later, longer lunar missions, or the inside of the ISS today, after years of human habitation in zero G. And it’s not just the mess I worry about … some of that waste is eventually going to get inside electronics and other equipment, with who knows what consequences.

I mean, my god, I wipe down my computer desk and keyboard every couple of weeks just to get rid of my own dead skin and hair. If our home office was in orbit, our own human mess, along with dust, spilled coffee, crumbs from snacks, dog hair and barf, you name it, would be coating every surface in the room, including the ceiling, and some of it would have made its way into the computers, the printer, and the wi-fi router. Gravity is our friend, and we need to learn how to bring it with us in space.

Some of the Apollo 11 50th anniversary programs on TV last week touched on the effects of long-term weightlessness on astronauts and cosmonauts, and though it’s not talked about much, you have to wonder how hard it’ll be for astronauts landing on Mars, after a seven month voyage in zero G, to acclimatize themselves to even the weak gravity there. I mean, they’re going to have a hell of a lot of work to do when they arrive, setting up habitation modules and such, and they’re going to be exhausted. What if they were able to travel in a positive-G environment? Wouldn’t that have to make things easier? And what if, on the return journey, they could slowly increase the rotation of their own ship, gradually building back up to Earth gravity before they arrived home? Oh, the Estes in me is really coming out now, isn’t it?

Well, hi there, Grandfather! You’re very much in my thoughts today, and I want you to know there’s still plenty down here to be excited about.