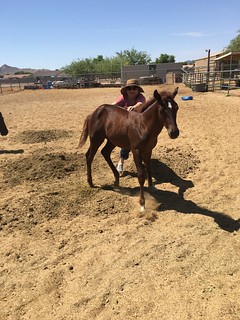 A quiet weekend at Casa Thing. Donna’s helping her friend Millie take care of horses and chickens at Millie’s son’s ranch near Queen Creek, southeast of Phoenix—I’ve been pestering her for pix and she just sent this one. They left Friday morning and will be back Monday afternoon. Polly works a ten/four schedule (four ten-hour days with three days off); Friday to Monday are her on days. Which means I’m home alone, unless you count the dogs … which one must, as anyone who has dogs knows.

Our tastes in TV and movies differ, so when Donna’s away I binge on the stuff she won’t watch with me. I’m re-watching earlier seasons of The Man in the High Castle and The Expanse. It’s amazing how much more one sees the second time around, at least with well-crafted shows like these. Friday night I watched Bohemian Rhapsody on HBO (sound bar on, volume set to eleven), and last night on Amazon the imaginatively-titled Some Guy Who Kills People. In between shows I’m reading a Michael Connelly novel, Dark Sacred Nights, which features his new LAPD cop character Renée Ballard working alongside his more well-known character Harry Bosch.

Donna’s been shopping around for a kitchen do-over: we want to take out a low ceiling, replace the cabinets and countertops, and make the island a little larger. I hope we have the budget for it. Well, even if we don’t, we’ll figure out a way to make it happen.

The first monsoon storm hit downtown Tucson last night, but our northeast neighborhood was on the periphery of it and while there were dark clouds, wind, and lightning, there wasn’t much rain. I hoped for another chance today, but the forecast calls for mostly sunny. At least whatever front moved through yesterday knocked the temperature down below 100°F. Donna says they had lightning at Queen Creek, but no rain.

Our son has switched jobs again: he’s back in the food service industry, where he started his sales career many years ago. He came in, this time, at an executive level, but one that will require a lot of travel. I enjoyed my defense contractor road warrior days … until, one day, I no longer did. I’m proud of our son and all he’s accomplished, but man, I could not work like he does. I’ve always been a slacker at heart.

Learning more about the iPhone camera portrait mode. When you take a photo in portrait mode the phone stores two versions of it: one with normal focal depth and one focused on the object you’re trying to capture. Here are side by sides of Mister B, helping me out in the office yesterday morning:

I always have the hardest time setting depth of field with my regular DSLR camera. It’s true what they say: we’re all photographers … until we try to shoot in manual mode.

I joined a closed Facebook community called “A Group Where We Pretend to be Boomers.” As you’d expect, members are baby boomers who make fun of themselves by posting as if they don’t understand the first thing about computers, email, the internet, and social media. To me, that’s more of a “greatest generation” thing, but I do know boomers my age who fit the stereotype well. But hey, isn’t Facebook mostly a boomer thing anyway? Aren’t all the youngsters on Snapfilter or whatever?

Anyway, here’s my first post to the boomer group:

Too subtle? BTW, when I ask Google if there’s a way to block bitmojis from appearing in my Facebook feed, the only links to come up lead to instructions on how to add them to my Facebook posts, so I guess that’s a non-starter. Nor is there a way to block those fucking Minion graphics.

Speaking of the lowest common denominator, Twitter today is full of shocked (shocked, I say) reaction to Trump’s latest racist outburst and the (former) British ambassador’s leaked note about Trump canceling the Iran nuclear deal to spite Obama. As if Trump’s racism and spitefulness hasn’t always been obvious; as if racism and spitefulness isn’t exactly what his base sees in him. As if any of this is news. As if any of this portends his downfall.