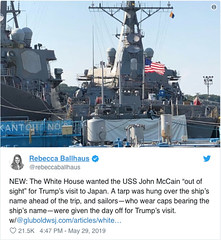 Yesterday’s story about the Navy attempting to hide the USS John S. McCain* during Trump’s visit to Yokosuka Naval Base in Japan is still unfolding … affirming my resolve to avoid commenting on breaking news until the dust has settled.

This story tests my resolve, but the dust has at least begun to settle, so here goes:

This is what was initially reported: White House staff, coordinating Trump’s trip, told the Navy that the “USS John McCain needs to be out of sight” during the visit. Navy officials at Yokosuka draped the stern of the destroyer with a tarp to cover its name, then took the additional step of placing a barge between the McCain and the USS Wasp, from whose deck Trump would address sailors. Sailors assigned to the McCain were “given the day off.”

The Navy, through Chief of Information Rear Admiral Charlie Brown, denies it, saying the ship’s name was fully visible during Trump’s visit. Well, yes, a tarp had been draped over the McCain’s stern, but senior Navy officers ordered it removed and it was no longer there during Trump’s visit on Tuesday. Yes, the barge had been placed between the McCain and the Wasp, but it too was gone by Tuesday.

So far, though, no one has denied the part of the story where sailors assigned to the USS McCain, wearing their McCain caps, were not allowed to board the USS Wasp and attend Trump’s speech. Which is an interesting interpretation of “given the day off.”

What does Trump say? “I would not have done that. I was not a big fan of John McCain in any way shape or form. To me John McCain, I wasn’t a fan. But I would never do a thing like that. Now, someone did it because they thought I didn’t like him. They were well-meaning, I will say. But I wouldn’t have.”

Here’s the emerging storyline, as of this morning:

“Overzealous underlings” are to blame. Senior officers, in their mature wisdom, undid the damage in the nick of time. The most senior officer of all, the commander in chief, is wholly innocent, above the fray.

I’m astounded by people’s willingness to believe in, and blame, overzealous underlings. If my 24 years in the military … which included two tours on the joint staff and ample exposure to four-star generals and admirals as well as senior DoD officials … taught me anything, it’s that the truly petty shit always comes from the top. Sure, underlings deliver the message, but they’re not the ones who wrote it.

When a colonel sidled up to me in the officers’ club bar and tugged on the leg of my flight suit to check that my socks were regulation black, he did it at a general’s specific behest. When the base commander had all the palm trees chopped down before the USAF chief of staff’s visit, he did it because the chief of staff specifically said he “didn’t want to see another fucking palm tree.” When thousands of USAF officers and NCOs wasted two years replacing the word “regulation” with “instruction” in every regulation … oops, instruction … written since the Air Force’s formation in 1947, it was because General McPeak didn’t like the word.

We are all underlings, some of us more zealous than others, but we don’t hide ships’ names on our own.

I’m calling bullshit. This goes right to the top of the chain of command. Trump is elbow-deep in what happened at Yokosuka. I know it.

2 thoughts on “Out of Sight”