“The Kochs were unusually single-minded, but they were not alone. They were among a small, rarefied group of hugely wealthy, archconservative families that for decades poured money, often with little public disclosure, into influencing how Americans thought and voted. Their efforts began in earnest in the second half of the twentieth century. In addition to the Kochs, this group included Richard Mellon Scaife, an heir to the Mellon banking and Gulf Oil fortunes; Harry and Lynde Bradley, midwesterners enriched by defense contracts; John M. Olin, a chemical and munitions company titan; the Coors brewing family of Colorado; and the DeVos family of Michigan, founders of the Amway marketing empire. Each was different, but together they formed a new generation of philanthropist, bent on using billions of dollars from their private foundations to alter the direction of American politics.”
—Jane Mayer, Dark Money: The Hidden History of the Billionaires Behind the Rise of the Radical Right 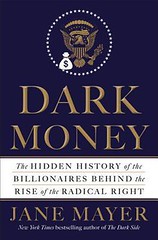 Dark Money: The Hidden History of the Billionaires Behind the Rise of the Radical Right
by Jane Mayer

Did not finish, so no rating, but had I the fortitude it certainly would have been four stars or more.

Anyone who gets paid to write for The New Yorker is excellent. Jane Mayer is excellent and then some. The subtitle of this book accurately portrays its content: a history how a few billionaires are cornering all the wealth and recreating a feudal society.

I got about halfway in. I felt frustrated, helpless to do anything about the 1% and their ever-increasing wealth and power. Frustrated and helpless is not a good feeling to have when reading a book. If I felt in any way empowered to do something about these bastards I’d have kept on reading. But I don’t, and to my shame I put the book aside for something more escapist.

I felt better after discussing “Dark Money” with members of my book club, only one of whom managed to finish it. Honestly, I wonder how many of the readers who put this thoroughly depressing tome on the best-seller list managed to get more than partway through it.

More on my feelings of helplessness: I can’t help wondering how many millions of votes won’t count in the 2020 elections. I bet it’ll be at least three million, as it was in 2016. Maybe more. I wonder how much wealth the 1% will have appropriated for themselves by 2020. I bet it’ll be substantially more than they have now.

They French, not all that long ago, sent their 1% to the guillotine. Don’t come around here scoffing about surrender monkeys. Do we, as Americans, have the balls to do anything like that? 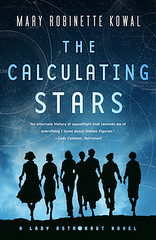 Pining for some good science fiction, I decided to read one of the 2019 Hugo Award finalists. “The Calculating Stars” surprised me in several ways. The science fiction is almost entirely fact-based, couched in an alternate-timeline world where space exploration … satellites, manned spaceflight, flights to the moon … developed a few years earlier than in our timeline, spurred by the impact of a large meteorite off the eastern seaboard of the United States, an extinction event forcing mankind to work on getting off the planet before it’s no longer habitable.

The novel is also a social history, reflective of our timeline’s history of resistance to racial and gender equality. Quick aside: one of the most interesting parts of the novel, to me, is Mary Robinette Kowal’s afterword, where she compares our actual history and progress with that of the world she built for this novel.

In short, ‘The Calculating Stars” is less science fiction than historical commentary, but it reads like a great SF novel and I couldn’t put it down. Despite, that is, my personal irritation with Elma, the “lady astronaut” herself, and her debilitating anxiety. “Quit clutching your stomach and stop vomiting all the goddamn time,” I wanted to shout. Yes, I’m impatient with weakness, and that’s a character flaw I must live with. Happily, Elma eventually overcomes the worst of that. I also questioned whether, in this timeline or the novel’s, any astronaut, let alone a woman astronaut, could have survived the revelation she took drugs, however mild, for anxiety. In my experience as a military aviator, that is a grounding event.

The astronaut corps’ resistance to the idea of women astronauts, along with that of the novel’s political and space agency leadership, is utterly realistic. I know because I’ve seen it in action in this timeline, having been an Air Force pilot in the 1970s when women first entered military flight training, and again in the 1990s when they broke the final barrier and began flying combat in fighters and bombers.

I would love to see this novel made into a movie. I also look forward to reading the second novel in the Lady Astronaut series, “The Fated Sky.” 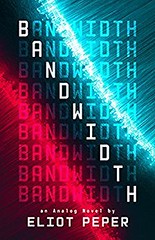 In this near-future novel, the internet has been privatized and is globally controlled by a single company. Individual users tailor personal feeds and receive a constant flow of information via implants. The monopoly’s feed architecture is supposedly neutral … it doesn’t care what your interests are, it just feeds you the information you want, allowing you to pursue your interests in private … but what if a band of hackers could spy on your feed and tailor it in an effort to change your behavior?

It’s not a bad story. The digital technology in this novel’s world is based on tech we use today, set farther along a predictable developmental arc. The characters are relatable, the villains believable. The moral awakening of the protagonist’s awakening is satisfying. The action’s not bad.

What’s hard for me to swallow is the idea there’s just the one band of hackers capable of spying on, and invading, targeted individuals’ feeds. C’mon, hackers all over the world would be hard at it, just as they are today.

The overblown and pretentious writing made me pine for Jack Reacher. I was going to go back into my copy to dig out an illustrative sample, but a reviewer on Goodreads has already done so, so I’ll share the example he used:

But it was also the first ray of light entering a boarded-up house in a condemned neighborhood as a hopeful squatter adjusted his sweaty grip on a crowbar and pried the plywood from a broken window.

If you can wade through the prosiness, there’s a decent story here, and our current concerns over Facebook and Twitter’s ever-tightening grip on the news and information we get give it some urgency. 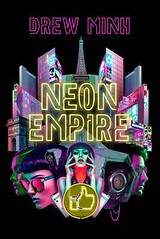 The author, Drew Minh, sent me a pre-publication Kindle copy of “Neon Empire” to read and review.

“Neon Empire” is a plausible near-future dystopian tale. Imagine a city like Las Vegas, built from scratch in a remote desert location, with different sectors duplicating tourist highlights of Paris, Rome, Barcelona, and Berlin. The famous buildings and monuments are shells, filled inside with casinos, spas, and high-end consumer goods shops. The city is inhabited by a core population there to keep things running, vastly outnumbered by rotating hoards of tourists eager to see and tweet cell phone videos of their favorite celebrities (who can, in Princess Diana-esque fashion, frequently be glimpsed whizzing by  in chauffeured limousines, pursued by motorcycle-mounted paparazzi, taped by remotely-flown drones and broadcast on giant screens … all staged of course). Life in Eutopia, especially for its branded celebs and the cell phone-wielding tourists, is a frenzy of social media and consumer shallowness. Kardashians carrying Hermes bags on the Strip writ large.

I say plausible because you have suspend just enough belief to accept the idea that normal people will in the near future be able to monetize their social media presence by tweeting about celebrity sightings and drawing vast followerships through hashtags. I dunno, maybe we are in fact getting to something like that. At any rate, I was willing to go along with it. And I’m glad I did, because “Neon Empire” is a rousing story with all the elements: missing persons, dark political and financial undercurrents driving events, drugs, sex, violent crime (both staged and real), murder, and did I mention sex?

At its core, “Neon Empire” is an old-fashioned morality play, and I don’t say that to scoff. That’s what draws most of us to novels (and TV shows and movies); that’s what satisfies us in the end. If this novel merely depicted greed and fame, all reward and no punishment, it would be mere nihilism, and pointless … too much like real life. Stay to the end. It’s worth it, even if you can see the general outlines of it coming a long way away.

The world-building, characters, and story were more than enough to keep me turning pages, and you know what? I can see this Eutopia. Having lived in Las Vegas, knowing it as I do, I can see this next step. Drew Mihn is a sharp observer of the zeitgeist, and he’s onto something. 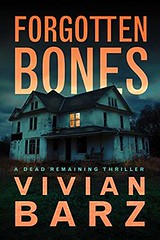 I was offered a pre-publication Kindle copy to read and review.

“Forgotten Bones” is a fast read, a small town serial killer mystery with a supernatural twist and a pair of engaging protagonists (the man is especially intriguing because he’s schizophrenic and inclined to hallucinate … only in this case his disturbing visions aren’t just coming from his own imagination).

Some of Vivian Barz’s narrative threads had predictable outcomes. The police chief, Ed, is recognizable from the outset as a baddie with nasty secrets to protect. Other outcomes are less predictable: the enigma of Milton had a far different resolution than the one I had anticipated.

The characters and their side stories (Eric and Susan’s respective pasts, their meeting and growing interest in one another) are engagingly written and you can’t help but like them. My one serious objection, however, is the “closed room” confessional at the end, where the baddies explain, to their captive audience, what they did and why they did it … this particular way or resolving mysteries always strikes me as canned, even lazy.

Still, the serial killings at the heart of this mystery are fascinatingly gruesome, the villain (or villains) truly diabolical, the heroes slightly flawed (one of them, anyway) and good-hearted. “Forgotten Bones” is a page turner from beginning to end. 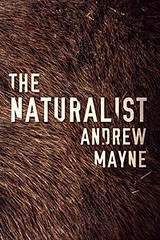 “The Naturalist” reads fast enough. The only times I bogged down were those when I got angry with the lead character, Theo Cray … about once per chapter, which explains why it took me a few days to read a book written to be read in a single sitting.

My overwhelming takeaway, in fact, is that dislike of Dr. Cray, a confoundingly smart yet stupid man, almost autistic in the way he presents himself to the world, a man who in real life would have been taken away in chains in the first chapter and shanked in the prison dining hall in the second, leaving a far shorter book.

I checked Goodreads for other reader reviews, and saw many comments about plot holes. I’ll just say ditto, there were plenty of those. I will elaborate on this, however: you have to actively suspend belief to go along with Dr. Cray’s magic computer program and seemingly instinctive understanding of where bodies might be buried and found, and able to ignore his ability to ignore the pressing demands of the career (and only source of income) he blows off in order to pursue the quest for a supernaturally-proficient serial killer who’s been active for forty or fifty years, and whose body count runs into the hundreds … ignored by law enforcement the whole time!

Yes, it’s a lot to swallow, but maybe you won’t get as angry with Dr. Cray as I did, and if so you’ll find this a worthy way to kill some time. An airport book? Sure. And airport books are generally fun reads.