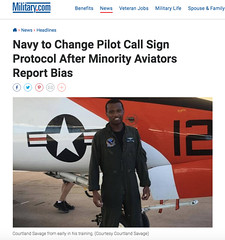 “The head of naval aviation has directed the creation of a new process for approving and reviewing pilots’ call signs after two African-American aviators at an F/A-18 Hornet training squadron in Virginia filed complaints alleging racial bias in the unit, from which they said they were unfairly dismissed.”

To outsiders, military aviators must seem like spoiled children. To some degree, we are. And this is why we can’t be allowed to have nice things.

During my year in USAF pilot training and the three years that followed, during which I taught new student pilots to fly the T-37 in Air Training Command, I didn’t have an individual call sign. The understanding back then was that you didn’t get one until you were checked out in a weapons system, a real airplane that could go to war: a fighter, bomber, tanker, or transport … not a lowly trainer.

After my tour in ATC, I was assigned to fly the F-15 Eagle. During RTU at Luke AFB, a crusty old major named Alex Hardwick told me to pick a call sign. “You’ll earn a new one once you start flying in NATO,” he said, “but you need one for now.” I had no idea what to name myself. Since his call sign was Tiger, I suggested Wolf. “No, we already have a Wolf in the squadron,” he said. We settled on Warlock, and I flew with that call sign for my first few months with the 32nd TFS in the Netherlands. Soon enough, I did something nameworthy and a new call sign was bestowed upon me. For the rest of my career I flew with this one: 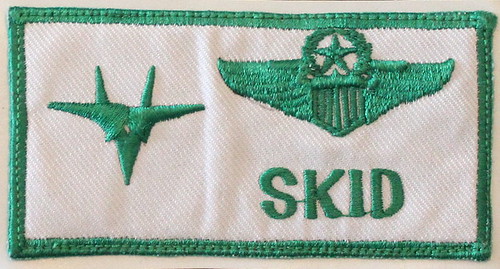 Call signs are informally assigned to air crew members by their squadron mates. As with nicknames in general, call signs often reflect something about a person’s mannerisms or personality. Speak quietly and your call sign might be “Mumbles.” Sometimes they’re based on memorable feats. Blow a tire on the runway in front of Dutch royalty and you’re “Skid.” Some call signs are just shortened versions of actual names, like “F,” a guy I flew with in Alaska whose real name was Fearneyhough … almost too many letters to fit on a nametag!

In my day, you only used call signs when you were around other squadron members, inside the building or out flying. You never spoke them aloud in formal settings. When you were shopping at the BX or conducting official business at headquarters, you wore your official name tag, the one with your actual name.

The idea is that in combat, if you see a MiG at your wingman’s six, you can say “Hendo, break right” a hell of a lot quicker than you can say “Alpha Kilo Two-One, break right”; that no one else in the flight will be confused over who you’re talking to; that Hendo (who like you has to remember a different official call sign on every flight) will instantly respond to his own name.

The Air Force (I won’t pretend to speak for the other services, but I bet it’s much the same) has an on-again/off-again relationship with call signs. Sometimes their use is tolerated, sometimes flatly outlawed. In the view of many senior commanders, the use of call signs undermines discipline. You can’t have some first lieutenant wingman addressing the full bird colonel leading the flight as Wildcat!

But we all got that. We knew when it was the right time to use them and when it was not. And when it came to giving our peers call signs, we self-policed. I only flew with a few black pilots. There weren’t many then and there aren’t many now, but I never knew one who’d been given a name that had anything to do with race. Ditto woman pilots. They weren’t part of the fighter force when I was in it, but I’ve met several since, and can’t think of any who’d been given disrespectful or sexist call signs.

If a new pilot’s buddies lose their heads and try to give a new guy or girl a disrespectful, racist, or sexist call sign, that’s when your crusty old majors and lieutenant colonels weigh in. “Try again,” they’ll say.

Well, that’s how it was when I was in the business. And that’s how it should be today: an informal, peer-level process, self-policed by senior officers in the unit, and nobody’s business at higher echelons.

But then we got Top Gun, and everybody discovered call signs. And wanted one. Training command instructor pilots have them now, even student pilots. I’m not saying that’s bad. What’s bad is when self-policing breaks down and a minority or female aviator gets a racist or sexist call sign. Because that’s when senior leaders, busy protecting their own careers, feel forced to step in and take over, and all of a sudden generals and admirals are reviewing and approving new call signs … and inevitably existing ones too.

I posted the link to the Military.com article to Facebook last night and a friend, a retired Navy captain, reminded me that one of the F-14 pilots listed in the credits at the end of Top Gun is Lt. Peter Caulk, call sign Horse. How long do you think a call sign like that would last in today’s Navy or Air Force?

The easy (career-protecting, spotlight-avoiding) solution to the whole mess is to outlaw call signs altogether. I’m sure the thought has occurred to Admiral Richardson, Chief of Naval Operations, and to General Goldfein, USAF Chief of Staff. It won’t be long now.

And it’ll be our own damn fault.

And that’s why we can’t have nice things.