For the past few months, the restoration yard at Pima Air and Space Museum was dominated by two huge Boeing airliners, a 747 and a 777. I’d point them out to visitors on my tram tour, joking that I didn’t know where we’d find room for them once they came out of resto. Well, now I know.

Two days ago, both jumbo jets were moved to a seldom-visited back lot on the south side of the museum. This is the area where PASM displays its collection of former fire-fighting aircraft, the YC-14 and DC-10, and some graffiti-covered C-47s left over from an art exhibit several years ago. The back lot is off the beaten path: it’s some distance from the main section of the museum, inaccessible to the museum tram, and hidden behind hangers. When I remember, I tell tram passengers about the back lot and encourage them to visit. Only a hardiest ever seem to find their way there.

Visitors arriving at the museum from the east can see the tails of both Boeings from the highway, which is near where I took the first photo. The second photo was taken from the west side of the back lot looking east. The third and fourth photos were taken with an extra-long monopod held up in the air, because sadly both planes are behind a cyclone fence.

The fence might be coming down … word is both Boeings will be opened for interior tours on special occasions. No, I don’t have dates. They opened up the DC-10 a few days ago, just for one day, but didn’t announce it until the day prior. I imagine it’ll be this way with the Boeings too. I’m told a few volunteers will be trained to man the aircraft when they’re open to the public.

Normally I’d gather my own facts about new exhibits and write my own descriptions, but this time I’ll quote the service histories of both aircraft from documents prepared by PASM.

Built by Boeing Aircraft Company at Everett, Washington and delivered to Pan American World Airways on March 21, 1970. It is the twenty-fifth 747 built. Following Pan Am’s practice of naming its aircraft this airplane flew with the name “Clipper Star of the Union” until 1982 when it was renamed “Clipper Ocean Spray.” It remained with Pan Am until the bankruptcy of the airline in 1991. In March 1992 it was purchased by General Electric for use as an engine test bed. Since then the plane has flown more than 3,000 hours carrying various test engines for GE as they develop the engines that power many of the planes that are replacing the 747 in airline service. General Electric donated the aircraft to the Pima Air & Space Museum in November 2018.

Built by Boeing Aircraft Company at Everett, Washington and rolled out on April 9, 1994. This is the first 777 to be produced. It made the type’s first flight on June 12, 1994 and participated along with other prototypes in the aircraft testing and certification that continued for the next 11 months. The aircraft remained in Boeing’s test fleet until the year 2000 when it was sold to Cathay Pacific Airways. As a part of the sale it was modified to replace its original Pratt and Whitney PW4000 engines with Rolls-Royce Trent 884B-17 engines. This is a complex change which required completely replacing the engine pylons. It is the only 777 on which this type of engine change has been made. The plane was delivered to Cathay Pacific in December 2000. It remained in service with the airline until June 2018 when it was retired from service. Recognizing the importance of preserving the first 777, Cathay Pacific and Boeing selected the Pima Air & Space Museum as the permanent home for the aircraft. It was flown to Tucson for display in September 2018.

If you’re looking for another reason to visit the back lot, PASM just put an Adam A500 back there. What’s an Adam A500? Well might you ask, since you’ve probably never seen one. It’s a six-place utility aircraft with two piston engines in pusher/puller configuration, and twin booms for the elevator and rudders. Originally a Rutan design, only seven were built. I don’t know the story behind this one. All I know is that it showed up in front of the restoration hangar in pieces, and is now reassembled and out back with the DC-10 and the other aforementioned aircraft. I think it’s pretty.

Peering over the fence into the off-limits restoration yard, I see we have a couple of new rotary wing acquisitions. 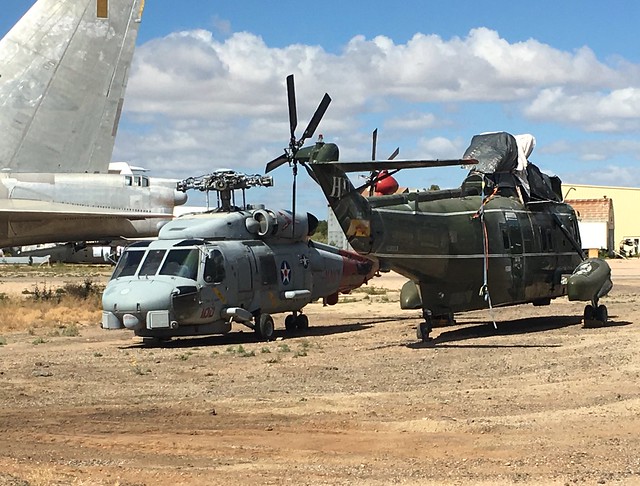 The Navy SH-60 Seahawk on the left sports a pre-WWII roundel and I don’t know why. The USMC Sea King on the right is in VIP transport livery and appears to have come from HMX-1, the Marine’s presidential support squadron. It’s not a “white top,” so probably isn’t a former Marine One. It might have been used to support the vice president, visiting heads of state, or high-ranking DoD officials. But hey, you never know … the Kennedy VC-137C, SAM 26000, lost its Air Force One livery and was repainted in standard VIP transport colors after it was no longer used by presidents, and that could be the case with this Sea King. I guess I’ll find out when PASM issues some information on it.

Several years ago I discovered a dust-covered ERCO ball turret in a storage area and wondered when and where it would go on display. Walking through one of PASM’s WWII hangers Monday I saw it sitting next to the Consolidated PB4Y-2 Privateer, the Navy version of the Army Air Force’s B-24 Liberator. The Liberator used a different type of nose turret, but the Privateer used the ERCO. Which means there’s an ERCO ball turret on the nose of the Privateer and an identical one on the floor next to it. Which is cool, because visitors can look inside the one on the floor and see how the gunner curled up inside, and see actual (training) .50 caliber rounds in the machine gun feed trays.

More cool stuff is expected out of restoration soon, including a Douglas A-20 Havoc and an Ilyushin Il-2 Shturmovik. Rumor is there’s a C-5 Galaxy in the boneyard with PASM’s name on it. Now that I know where they found room to park the two big Boeings, I can guess where the C-5 will eventually go. If PASM gets any more big planes, though, it’s going to have to ask the county for additional acreage.