IDGAF, Except When I Do

Donna and I are in our 70s. Donna’s birthday is next week and once again she’ll be an official older woman … until October, that is, when I’ll catch up with her. But the less said about that the better.

We have a lot of friends our age, some a bit older, some a bit younger. Sadly, it’s nothing new to hear from a contemporary who doesn’t have long to live and has decided it’s time to read his or her friends in on the fact. No doubt you’ve had the same experience. You and me, we’ll experience it again and again, and some day it’ll be our turn. Never gets easier, though. It sucks, and it sucks every time.

When we were stationed in the Netherlands we became close friends with our squadron’s Dutch/American military liaison officer, Peter. We stayed friends, and some years later worked together again, organizing a squadron reunion in Las Vegas. Peter and I exchange email and holiday cards all the time. He had a minor stroke a couple of years ago, and then this April, on the train to Den Haag, suffered a minor heart attack. When he was in hospital for that they discovered a not-so-minor cancer. He wrote to us and a few other friends this morning.

I never know what to say to friends when they get bad news like this. Who does? I’ll be working on that, and in the meantime calling up good memories of our times together.

My reading glasses are a mess. I guess I wasn’t cleaning them properly, and the non-glare coating started wearing off in patches. I needed an eye exam anyway, just because it’s been a few years, but what I really wanted was a new prescription for readers. I went in for an exam and prescription this morning, then stopped at Costco to pick out frames and order my new glasses. Here’s what I’m getting: 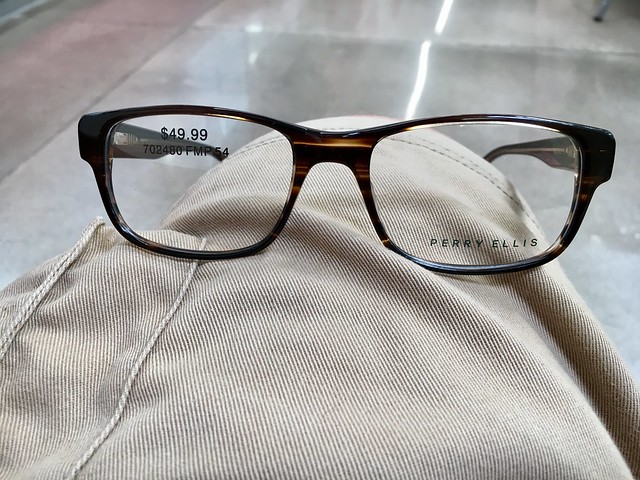 Yeah, cheap and Clark Kentish, but I won’t be wearing them outdoors, and since I’m in my 70s I can finally, honestly, say idgaf. Besides, I like the traditional look.

p.s. I looked up Perry Ellis to see if he was real. Now I kind of wish I hadn’t. He was in fact a real person, a fashion designer, six years older than me. He died of AIDS-related complications in 1986. He was only 46.

I’m not going out of my way to follow the story of the South Dakota Air National Guard F-16 that crashed into a warehouse off the end of the runway at March AFB in southern California yesterday, but I can’t help seeing posts about it on Facebook and Twitter. On Facebook, one of the posts I saw was to an aviation group, and the comments were focused on the mishap pilot and whether or not he fucked up somehow.

I have no idea what happened yesterday. For all I know the Viper pilot did everything right, the crash was inevitable, and there was no way to avoid hitting the warehouse. But reading those comments I couldn’t help remembering a day in October 1987. I was filling out a flight plan at MacDill AFB, Florida. The TV in the VIP room next to the map table in base operations was set to CNN, which in those days was hard news, 24/7. On the screen was a multi-story hotel, and it was in flames. An Air Force A-7 Corsair II fighter-bomber, attempting an emergency landing at Indianapolis International Airport, had just crashed into a Ramada Inn. The pilot had ejected seconds before impact and was alive. This had literally just happened, and emergency crews were still responding.

Two A-7 pilots were in base ops with me, filing their own flight plan to somewhere or other. One of them, a colonel, got on the AUTOVON and started making calls. Within minutes he had the pilot’s name, and shouted across the room to his wingman, “I knew it, it’s ___________!” “Well, that was only a matter of time,” responded the wingman. The hotel was still engulfed in flames, and no one yet knew if anyone inside had died (turned out nine were killed instantly and another person died of burns 10 days later).

The fighter community is a small one and news travels fast. You can be certain every F-16 pilot in the Air Force knows the mishap pilot’s name by now, and whether he was known as a good stick or a weak dick, and has the inside line on what actually happened. The rest of us will find out when the accident report is released a few months from now.

There’s an old aviator’s prayer, sometimes called Shepard’s Prayer, after the Mercury astronaut. It goes like this: “Please, dear God, don’t let me fuck up.”

And while you’re at it, dear God, I’m gonna need you to go ahead and quit killing off my friends, so if you could do that, that’d be great.

One thought on “IDGAF, Except When I Do”