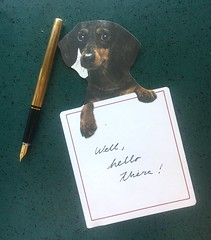 In the ninth grade, in Laramie, Wyoming, I took typing, probably the most useful class I ever took. To this day I view touch typing as an essential skill, right up there with readin’, ritin’, and rithmetic. After I learned to type, apart from filling out forms and signing my name, I avoided writing anything in longhand. Learning to type changed my life and helped define who I am today.

Now I’m trying to re-learn the art of writing by hand, in grade-school cursive yet, using a fountain pen my father gave me 29 years ago. Be patient, I tell myself. It’ll be worth it.

I don’t know anything about Julian Assange’s writing habits, but if he has a mind to work on his calligraphy he’ll soon have plenty of time to do it. I have mixed feelings about Assange being remanded to U.S. custody for prosecution, which I’m pretty sure will be the upshot of his arrest this morning in London. Yes, he did Trump a solid by publishing stolen Democratic Party emails in 2016, but muzzling the press is far more important to Trump than protecting a supporter who hasn’t done anything for him lately, and making a show of locking Assange in prison will give his administration the excuse and precedent it needs to go after media outlets who cross Trump. By, say, publishing a leaked copy of the Mueller report, or his tax returns.

Most of us have by now been exposed to the right wing claim that Hitler’s Nazis were socialists. It’s right there in the name, they say: Nationalsozialistische Deutsche Arbeiterpartei, the National Socialist German Workers’ Party. “Socialist” and “Workers,” two words forever associated with Karl Marx and the Soviet Union. This in spite of the fact that the people making this claim are generally fine with anti-Semitism, white nationalism, and authoritarianism, three central features of Nazism. So how to make sense of something like this, posted to Facebook yesterday by an old friend? 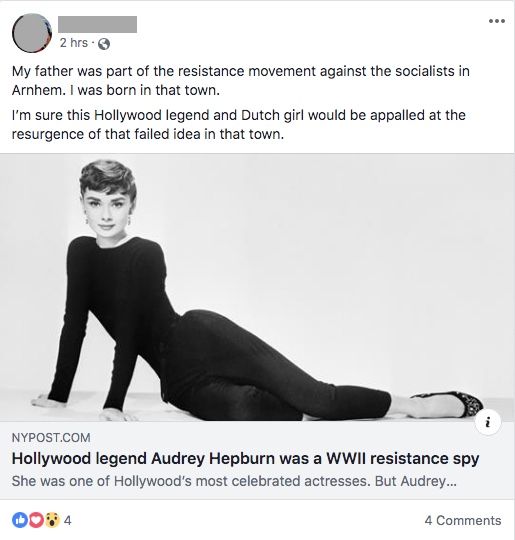 Because I can’t even. One, the Dutch resistance fought the Nazis, not “the socialists.” Two, there’s no “resurgence” of socialism there … the city of Arnhem, along with the rest of the Netherlands and other Northern European nations, has been progressively socialist since the 1950s (“failed idea,” my ass). Three, my old friend is an educated man, far too sophisticated to fall for the infantile “but it’s right there in the name” argument. He knows better.

Here’s what I think: he sees himself as a social media influencer. By pushing the Nazis=socialists/socialists=communists meme to a right wing audience, he’s helping the ideologues he supports strengthen the weapon they’ve always deployed against progressive Democratic Party candidates running for office. Kamala Harris? Beto O’Rourke? Elizabeth Warren? Alexandria Ocasio-Cortez? Socialists! Just like Hitler! (and never you mind there are plenty of things about Hitler these people admire).

Nice touch, though, throwing in a photo of Audrey Hepburn. She sure draws the eye, doesn’t she? I wonder what she would have thought about all this. I also wonder what’s going on with her hips. Bettie Page’s hips didn’t stick out like that, is all I’m sayin’.