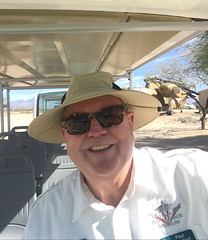 A bad cold was overdue: it’s been two years, maybe three. Last week it was a runny, drippy nose, which I chalked up to springtime pollen and combatted with Claritin. But yesterday, riding to Pima Air and Space Museum, I realized it had progressed beyond hay fever. The clear watery stuff that had been dripping from my nose was now thick and yellow. My head was stuffed, my brain felt disconnected, my throat was painfully sore, and even riding the motorcycle to work couldn’t cheer me up.

Halfway through the first tram tour my voice went on strike. And so, for the first time in the eight years I’ve been volunteering at PASM, I bailed on my co-volunteers and went home. Now it’s pseudoephedrine and Afrin, frequent naps, and gallons of water. That’s a selfie I took yesterday just before loading passengers, practicing my “Why no, I’m not sick” face.

The Air Force issued Afrin to aircrews as an emergency measure to clear our ears and sinuses during descents from high altitude. Normally you never used the stuff, equalizing pressure inside your head instead by doing valsalva maneuvers. They always cautioned us not to use Afrin unless absolutely necessary, since after only a few uses the soft tissue in your sinuses expands and now you’re in a world of hurt. But I’m old now, and grounded, and will take my chances with the side effects.

Well, enough about that.

I exchange letters with a friend in Virginia. He writes his longhand, using a fountain pen. Writing by hand has always been a struggle for me, so I type mine on the desktop and print them. I remembered my father giving me a gold Cross fountain pen several years back and with surprisingly little effort found it. I remembered also a note Dad included with the pen, and happily it was still in the case, neatly folded and dated “Christmas, 1990”:

Upon graduation from college the Caldwells [my mom’s parents] presented me with a pen and pencil set. At the time I remember thinking that I could have used the gift while I was still in college instead of afterwards. I am surprised at how much I used that set – the pencil no longer works but I still keep it. The pen has had some repairs over the years but it still serves me faithfully – it lies within reach on my desk and I use it several times a week. Inasmuch as I love my pen, I thought you might like to have a fountain pen too. Of course a fountain pen isn’t nearly as functional or versatile or convenient as a ball point – a fountain pen is sometimes messy and bothersome when you have to fill it – they aren’t much good for carbons either. Be that as it may, you (as a literary man) know that a fountain pen is civilized and has a cachet that a ball point will never have. I hope this gift brings you years of service.

I must have used the pen a few times. I say so because the pen came with six ink cartridges and one is missing (the others long since dried up). There’s also what Cross calls a converter, a different type of cartridge you dip into a bottle of ink and fill by twisting the other end. I resolved to, if not write an entire letter with the pen, at least use it to sign future letters, and ordered new cartridges and a bottle of ink from Amazon. They came last night and I’ll practice fountain-penmanship later today.

Long before my friend and I began exchanging letters, my Dad and I were regular correspondents. From the time I married and left home until his death in 2007, we exchanged letters at least monthly, sometimes more often than that. I saved all the letters he wrote to me, and he saved all my letters to him. I have them all now. Blogging is an extension of my lifelong habit of letter-writing, but I’m thankful there’s at least one friend today with whom I can exchange actual, old-fashioned letters.

More on writing: my Paulgrams, little newsletters delivered to subscribers by email. I haven’t written one in a long time, and every time I try to start a new one I ask myself why I’m doing it. I blog fairly regularly, after all, and what do those Paulgrams have to say that isn’t already here on Paul’s Thing? Up in the air for now, those Paulgrams.

My job today is to get better. Gotta go work on that. More soon.